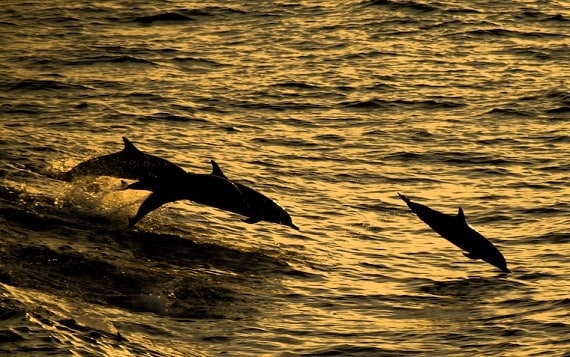 I have more great news to share with you about Oceana’s campaign to halt the use of deadly seismic airguns on our Atlantic coast. On September 6, Oceana delivered more than 100,000 petitions to Tommy Beaudreau, director of the Bureau of Ocean Energy Management. Those petitions urge the government to stop the proposed use of seismic airguns, which the energy industry wants to use to search more than 300,000 square miles of the Atlantic for buried oil and gas deposits.

Airguns shoot deafening blasts of compressed air through the water every 10 to 15 seconds, and the reflected sound waves form a geologic map of the seabed. But these blasts are also deadly. The government estimates that the noise—100,000 times more intense than the roar of a jet engine—will injure and possibly kill 138,500 dolphins and whales along the East Coast. Temporarily deafened, dolphins and whales will be unable to communicate while they hunt, find mates, and migrate. Many will likely die of starvation or stranding as a result. Airguns will hurt local economies, too. More than 730,000 jobs in the blast zone are at risk, and recession-battered communities can’t afford to lose critical sources of income.

Current rules ban drilling in the Atlantic until 2017, but the oil and gas industry could begin the mapping process while the ban is still in place, initiating unsafe offshore oil drilling along most of the eastern seaboard.

When I last wrote to you, the Department of the Interior had just postponed their decision on seismic airgun use until next year. Putting 100,000 petitions into Tommy Beaudreau’s hands was just the first step. Our grassroots advocates are on the ground right now holding public forums to educate residents in nine states about how airguns will impact their lives.

And we’re not fighting alone. Just one day before we delivered our petitions, The Washington Post issued an editorial stating that “only when science has spoken should any decision be made on [airgun] use off the Atlantic coast.” Right now The Mid-Atlantic Fishery Management Council and about 50 members of the U.S. Senate and House of Representatives are also calling on President Obama keep airguns out of our waters. Join them and encourage our president to make the right choice for our oceans.

Do you agree that the use of seismic airguns in the oceans should be stopped? Please vote and also leave your comments at the bottom of this page.

This article was written by Andrew Sharpless for Oceana.org