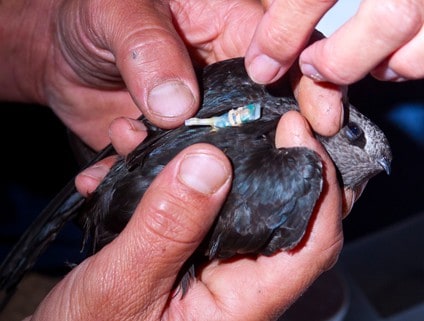 For 165 years, the Northern Black Swift has pulled a fall migration disappearing act that the famed illusionist Harry Houdini would envy. Where the high flying bird vanishes to after breeding and spending summers in many parts of western North America has puzzled ornithologists since the species was discovered in 1857. Now, thanks to a new study, we learn that at least some of them travel about 4,300 miles to a remote part of western Brazil in lowland rainforest.

The study, which was published in the March 2012 issue of Wilson Journal of Ornithology, involved attaching geolocators (tiny devices that record and store tracking information) to four adult Black Swifts from two nesting sites in Colorado, then recapturing the same birds at the same sites the next year to download the stored data. Three of the four tracking devices were recovered, and showed the birds departing for their fall southerly migration between September 10 and September 19, arriving in Brazil between September 28 and October 12, departing Brazil between May 9 and 20, and arriving back at their Colorado breeding sites between May 23 and June 18.

“Winter ranges have been identified for most neotropical migrant bird species, but data on patterns and timing of migration for the Northern Black Swift is virtually non-existent… their winter range was previously, unknown,” said Jason Beason, the lead author of the study with the Rocky Mountain Bird Observatory. “The data we acquired is very important to understanding species ecology, including reproductive success, population dynamics, behavioral ecology, evolution, and response to changing selective pressures,” he said.

“This is one of the last major mysteries left in ornithology – where black swifts spend the winter”, said Bob Altman, Wildlife Biologist with American Bird Conservancy and coordinator of Black Swift monitoring in the Pacific Northwest. “Thanks to the efforts of the Rocky Mountain Bird Observatory we can now begin the process of further identifying and protecting wintering sites of conservation importance for one of the most unusual breeding birds in North America.”

Several factors contribute to the lack of knowledge about migration and winter distribution of this species, including difficulty in accurate field identification of individuals due to their high and rapid flight, problems differentiating this species from similar-sized members of other species that occupy Central and South America, and the inability to verify observation records. No band recoveries exist outside of the United States from about 200 Northern Black Swifts banded from 1950 forward.

Further, satellite GPS devices, which transmit real time tracking of individuals, are not sufficiently small to place on a species the size of the seven-inch-long Black Swift. As a result, geolocators (which record data but do not transmit it) were used which meant that the study birds would need to be recaptured for the location data to be analyzed. That necessity was made easier on one hand by the fact that the birds typically are very committed to returning to their previous breeding colony, but made more challenging because they tend to nest in areas that are incredibly difficult to access – behind waterfalls in deeply shaded niches in steep and narrow canyons.

“Now that we know where this bird winters, we can identify some concerns. The most obvious are climate change impacts and the current rate of deforestation in Brazil, which could directly threaten this species. It appears likely that the rate of deforestation will increase rapidly in the coming decades, which could result in the loss of up to 30 percent of the forest cover by 2050,” Beason said.

The Black Swift is a U.S. WatchList species of concern as some data show a 6.3% per year range-wide decline from 1966 to 2001. One potential reason for the decline is habitat loss and a decrease in the abundance of the bird’s main food source — winged insects — tied to the use of pesticides.

The Black Swift is the largest swift in the USA. Their plumage is mostly dark grey; although there is a contrast between the upper and lower wings. The shoulders are much darker than the remaining portion of the wing. Often called the “cloud” swift, these birds hunt in the rising air masses that sweep large numbers of insects into the sky. They hunt at such high elevations that they are often not visible with the naked eye.