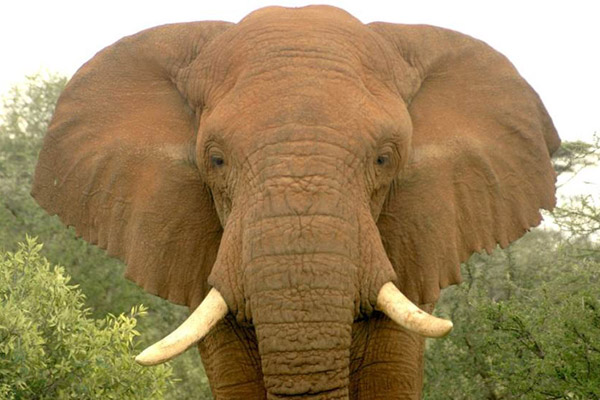 Around 100,000 elephants were killed by poachers for their ivory on the African continent in just three years, according to a new paper in the Proceedings of the National Academy of Sciences. Between 2010 and 2012 an average of 6.8 percent of the elephant population was killed annually, equaling just over 20 percent of the continent’s population in that time. Elephant deaths are now exceeding births, which on average are 5 percent annually.

“We are shredding the fabric of elephant society and exterminating populations across the continent,” lead author George Wittemyer with the organization Save the Elephants told the BBC, noting that old elephants are often the first killed. Elephants are being killed for their ivory, which is then smuggled abroad to mostly to China, but also to Thailand, the Philippines, Europe, and the U.S.

Unfortunately data on elephant populations across Africa is uneven and in many places scant, making continent-wide estimates like these difficult. In this case, the researchers used some of the best studied populations in Samburu, Kenya to determine how many elephants were dying of natural causes versus poachers in the site. They then used two different methods to extrapolate this data.

In the first they employed good data in 12 sites across Africa to estimate the total poachers’ butcher bill over the last few years. In the second, they used computer modeling to estimate poaching levels at 306 sites. Both methods came to similar numbers: 101,784 elephants killed versus 99,997 elephants, respectively over three years.

“This is the best work available from the best data we have using officials from the top organization, so in my mind this is the best you are going to get at the moment,” Wittemyer told the Associated Press. “Because of the magnitude of the issue and the politics we’ve been very careful. The scrutiny we did internally was at a much greater level than the questions we got in the peer review process.”

The numbers are also quite similar to other estimates from wildlife conservation groups. For example, the Wildlife Conservation Society has estimated that around 35,000 elephants are being killed annually on the continent. Others put the number significantly lower, i.e. 22,000-25,000 annually.

In all, conservationists estimate that there are around 400,000 elephants on the continent, but no one knows for certain.

However, the situation is far from hopeless. There are still some countries in Africa where poaching is infrequent and elephant populations are on the rise, such as Botswana. The numbers killed may also be dropping. According to the study, the slaughter peaked in 2011 with an estimated 40,000 elephants poached or about 8 percent of the population. The next year, 2012, the number killed dropped to around 35,000.

“Intriguingly, our analysis suggests the rate of killing slowed after the peak in 2011 both locally in Samburu and globally, although it still remained unsustainable,” the scientists write. “It is critical to identify the drivers of this change in the rate of illegal killing.”

They note that the drop may have to do with restricting ivory auctions in China at the end of 2011.

Moreover, Africa’s elephants have already survived a massive poaching crisis in the 1970s and 80s.

“I have to be an optimist,” co-author and founder of Save the Elephants, Iain Douglas-Hamilton, said. “I’ve been through all of this before in the 70s and 80s. As a collective group we stopped that killing, and in the savannahs there was a reprieve of 20 years. I believe we can do it again.”

The conservationists told the BBC that if rates don’t slow, the African elephant could be extinct within a century. Complicating matters, is recent evidence that there are actually two, not one, species of elephant on the continent. A 2010 study found that forest elephants (Loxodonta cyclotis)—smaller, sporting straighter tusks, and residing in rainforests—are as distinct from their savannah cousins (Loxodonta africana) as Asian elephants are from woolly mammoths. Yet, forest elephants are rushing faster to extinction than savannah elephants. A study last year estimated that 62 percent of forest elephants had been slaughtered by poachers between 2002 and 2011.

There must be something done to stop poaching, it is so brutal and again money is the main aim. We must protect and save the elephants, and rhino before it's too late.

there are many things wrong and loving with this world, including poaching. However killing a poacher is also unloving and not the solution. Killing is never justified or loving.

Yes, poaching is a problem. Most of the governments already a shoot to kill policy when poachers try to escape. The destruction of hundreds of tons of ivory did not help, that destruction drove the ivory prices through the roof. Simple supply and demand, had the government idiots gotten together and developed a market for all the ivory they destroyed the prices would have bottomed out.. Next we have the closing of hunting is a couple more countries. What this will do is make the poaching easier for the poachers. How you ask? Who keeps the water holes pumped up… Read more »

I have no sympathy for poachers. None. A "shoot-to-kill" policy to thwart poaching may be the only way left to save these elephant populations. Biologist and double Pulitzer Prize-winning author Edward O. Wilson in his wonderful book, The Diversity of Life, stated over a decade ago that we are in the midst of the sixth and greatest mass extinction event in geological history, thanks to the actions of Humanity. In fact entire ecosystems and all the species supported by them are being wiped out with horrifying regularity and this terrible process is accelerating. In my view, poachers, and smugglers of… Read more »