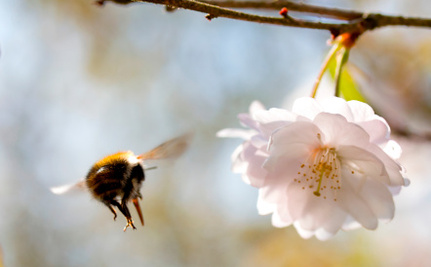 Despite some severe concerns about the world’s different species, 2013 actually turned out to be a bumper year for British wildlife. Here’s why, and a look ahead at what 2014 might have in store.

An unusually warm summer that ended a spate of six dismal ones helped wildlife up and down the stretch of Britain to flourish during 2013, according to a report from Britain’s National Trust.

Despite some severe concerns about the world’s different species, 2013 actually turned out to be a bumper year for British wildlife. Here’s why, and a look ahead at what 2014 might have in store.

An unusually warm summer that ended a spate of six dismal ones helped wildlife up and down the stretch of Britain to flourish during 2013, according to a report from Britain’s National Trust.

The National Trust’s Matthew Oates, a specialist on nature and wildlife, is quoted as saying: “We were more than overdue a good summer, and eventually we got a real cracker, although it kicked in after the slowest of possible starts. The way our butterflies and other sun-loving insects bounced back in July was utterly amazing, showing nature’s powers of recovery at their best. Many birds and mammals also recovered well from the cold late spring. Importantly, we have seen more winners than losers in our wildlife year, which is a tremendous result, considering where we were last year.”

This is in reference to the fact that 2012 is largely considered one of the worst years on record for butterfly populations in the U.K., with wet and cold conditions having hit insect populations particularly hard. While 2013 didn’t herald a complete recovery the National Trust, which collects data from all over the U.K., saw a rebound in numbers, particularly around the July and August months when summer finally arrived and temperatures became rosy. Indeed, even the long-tailed blue butterfly chose to stop a spell and forge a handful of colonies at the tip of the South East coast.

It wasn’t just the warm summer that helped though. The cool spring, while miserable at the time, actually provided an extended flowering season for many spring flowers like the snowdrop and bluebell. This extended season also set up June to be one full of ripe berries and ready-to-eat nuts and seeds, all of which gave British wildlife a fair banquet to feast on.

Another success story the National Trust points to is fungus. The summer saw a rise in several fungi because the swelter of summer settled upon Britain without a drought, meaning it was warm and wet and perfect for proliferation. Orchid populations also boomed in certain areas.

All that said, the year wasn’t great to all.

Birds, frogs and aphids all suffered due to the extended and cold spring months, with several summer migrant birds, such as swallows, failing to make an appearance in many of their traditional spots until relatively late in the year. The barn owl, too, had a poor time as a result of the extended cold season, probably in part due to the fact that many hibernating animals didn’t really become active until later in the year.

That said, because the summer months were so good, the National Trust notes several bird species did manage to recoup some of their losses as the mild summer went on, with it eventually being a record year for nesting Sandwich terns in certain areas, among other notable cases where birds managed to thrive.

What is encouraging is that, while nature can throw many a curve ball, it tends to be that when we have one good year like this another will usually follow. With Britain’s relatively mild if at times very blustery winter underway there is hope that, even with the predicted February cold snap, 2014 might be another year that is kind to Britain’s wildlife.

This is especially needed given recent warnings about the decline in Britain’s traditional bird populations. A few good years, though, and perhaps some of the steps being taken by the British government and nature groups can help save threatened species like the tree sparrow and willow tit from disappearing from British skies.

So here’s to a good 2013 and, hopefully, an even better 2014 in which bird populations bounce back and insect newcomers, mammals and all manner of wildlife thrive.

This article was written by Steve Williams for Care2.com