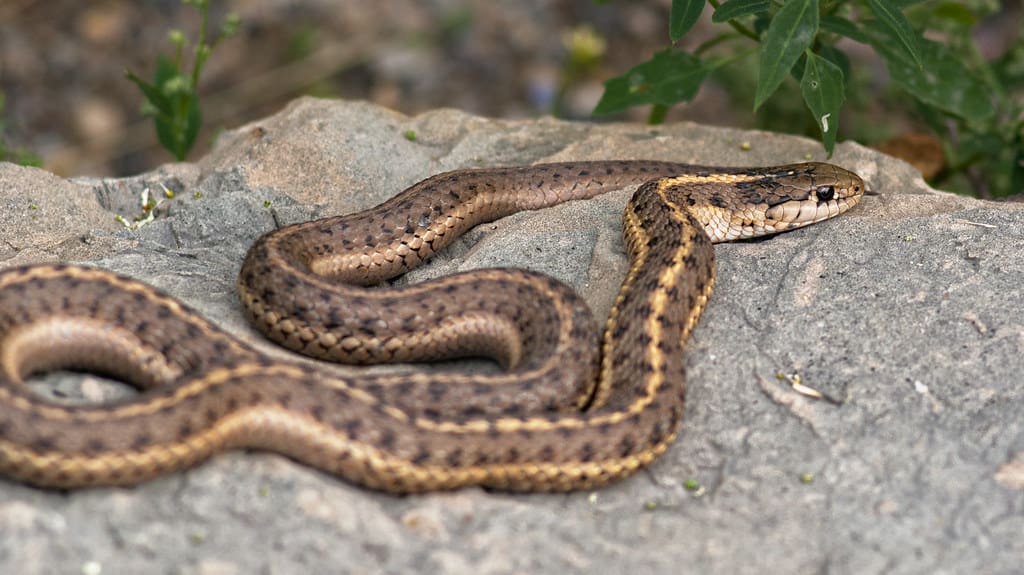 Happening upon a snake in the yard can be a startling—to put it mildly—experience.

Whether it’s an evolutionary instinct to jump back at the sight of a snake or another one of those ingrained cultural fears, a close encounter with the slithering kind usually shocks the system, even for those among us who admire the animal.

Truth be known, snakes can be a good thing to have around, especially when they are outside and minding their own business.

That’s because snake business has little to nothing to do with biting humans—our big terror—and a lot to do with acting in ways that benefit humans.

Obviously, having venomous snakes hanging around the yard isn’t ideal, but the fact is less than 20% are venomous.

In the US, we have four different groups of venomous snakes: copperheads, cottonmouths, coral snakes, and mostly rattlesnakes.

These snakes are worth avoiding and possibly a call to animal control. (Check out this state-by-state list of snake species to become familiar with venomous species near you.)

Other snakes, however, can make really good guests.

The Benefits of Having Snakes in the Yard

Yep, there is definitely some good that comes from having snakes in the yard. Just here us out…

Pest Control for the House

Lots and lots of snakes like to feed on rodents, and they are very adept at fitting into tight spots and burrows, where other predators can’t go. While many of us plant-based eaters would opt to humanely deal with mice or rats in the house (kudos to us!), the wilds of our suburban yard are no place to play favorites. Snakes need to eat, and consequently, when they are around, mice and/or rats are much less likely to be.

Pest Control for the Garden

Mice can be problematic in the garden as well, but snakes feed on much more than mice. There are snakes that will happily dive into burrows in pursuit of subterranean rodents like moles and voles. Other snakes are small enough to feed largely on insects and slugs, both of which can do some damage on those leafy greens we hope to eat. There are even snakes that will eat other, venomous snakes. Snakes are pest control for the garden, too.

Another important benefit of snakes controlling rodent populations is that it also decreases the rampancy of Lyme disease. While snakes don’t eat ticks, they do eat the mice from which ticks can acquire the bacteria that causes the disease. More so, one little field mouse can carry 100 ticks in its fur. If it gets in the house, so do the ticks. But, the snakes, by default, get rid of the ticks as well.

Snakes You Should Learn to Love

While many folks may still not be ready to embrace the legless reptile, it’s worth knowing which ones are our best allies and that we are likely to encounter.

Inviting Snakes to Your Yard

With all that in mind, some people might even find themselves wishing to invite snakes into the yard. To do so, it’s as simple as building convenient habitats for them. In general, this means having stacks of rocks around (rockeries), as well as piles of old logs—maybe in a distant garden bed—that can just rot away. A small pond is also a plus, or even a ground-level birdbath will work. And, the classic human-made snake habitat is a sheet of tin or plywood on the ground.

Once snakes become a welcome and appreciated addition to the yard-scape, the fear begins to subside. That’s not to say they aren’t wild animals with their own foibles, but they can become just as pleasant to spot as birds and squirrels. As always, knowing about what you are looking at makes it all the more rewarding.

This article was first published by OneGreenPlanet on 17 May 2021. Lead Image Source: MattysFlicks/Flickr.