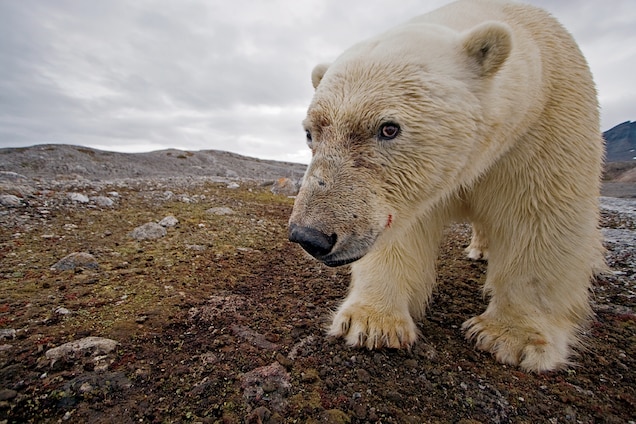 The Arctic predators—which depend on constantly diminishing amounts of sea ice to catch marine mammals such as seals—are declining in number, and fast.

There are fewer than 25,000 polar bears left in the wild, according to the nonprofit organization Polar Bears International. Near the southern Beaufort Sea (map), for instance, the population has dropped about 40 percent between 2001 to 2010, from 1,500 to 900 bears.

And as their habitat shrinks, they’ve have been acting strangely. On Wednesday, five bears surrounded a team of scientists at a weather station in Russia, trapping the people inside.

On the same day, elsewhere in the Arctic, scientists representing Canada, Denmark, Norway, Russia, and the United States announced a ten-year plan to prevent polar bears from going extinct. Actions include preserving polar bear habitat and working with policymakers and the public to address climate change.

But combating climate change doesn’t happen overnight, and the lack of food and habitat means polar bears are getting creative to stay alive. (Read our Polar Bear Watch blog.)

Here are four strategies polar bears are using to weather our changing planet.

When a research team in Svalbard, a group of islands in the Norwegian Arctic, recently observed a starving polar bear eating a dolphin and burying the leftovers in the snow to save for later, it was surprising on a lot of levels.

For one thing, polar bears generally prefer to eat seals. What’s more, scientists had never observed the predators eating this species of dolphin. And though other bear species, such as grizzlies, store food for later, sticking leftovers into what amounts to a refrigerator is unusual behavior for polar bears.

Here’s what likely happened: The dolphins swam into Svalbard while it was ice-free—also unusual, since that area is normally frozen year-round. When ice packed into the area later in the year, the dolphins were trapped and fell prey to the polar bear.

These ice entrapments are a short-term boon for the bears, giving them an easy source of fatty food they can just scoop out of a hole in the ice.

But Peter Ewins, leader of Arctic conservation for the conservation group WWF, says it doesn’t mean Norwegian polar bears will be just fine.

Surf and Turf on the Menu

Each year, snow geese come to Canada to breed. Females typically lay four eggs to a clutch. While they were once endangered in the United States, the species has rebounded—which is lucky for polar bears.

In a 2011 study published in the journal Oikos, vertebrate zoologist Robert Rockwell found that these eggs provide a backup food source for the polar bears. Downing one of these eggs is like “eating a stick of butter,” Rockwell said in an interview at the time. (Also see “Polar Bears Turning to Goose Eggs to Survive Warming?”)

While Rockwell estimates that 88 snow goose eggs are about the caloric equivalent of a seal, WWF’s Ewins likens it to eating granola once a day for the summer, and expecting it to sustain you for the next six months.

“A few specialist polar bears might be able to eke out a living on a mixture of seaweed, and fish, and whale carcasses that happen to be around” —and, clearly, goose eggs—”but eating those kinds of things doesn’t sustain anything like the current population levels,” Ewins says.

Karyn Rode, a wildlife biologist with the U.S. Geological Survey in Anchorage, Alaska, agrees a few lucky bears could benefit from foods such as goose eggs.

But Rode, leader of an April study in the journal Frontiers in Ecology and the Environment on the topic, cautions these opportunistic meals won’t help the species as a whole survive.

Walking Hibernation? Not So Much

Rising global temperatures and Arctic ice’s natural variability have led to longer annual ice melts in the summer, and incomplete re-freezes in the winter. This makes it harder for the polar bears to find food, since they depend on ice sheets to hunt seals that also use them for rearing pups.

“We’re seeing a greater proportion of bears come on shore in the summertime during the sea ice minimum, and they’re spending longer times there,” Rode says.

Some researchers had thought that the polar bears used an active hibernation strategy to conserve energy during lean summer months, when some of them swim ashore.

But a study published in July in the journal Science calls that theory into question: The activity trackers the researchers put on the polar bears revealed that the bears didn’t actually slow their metabolic rates beyond the natural slowing caused by starvation.

Polar bears are “very opportunistic eaters,” Rode says. “They’ll eat anything, and sometimes to their detriment.”

That includes the food and waste that people store in their towns. (See “As Sea Ice Shrinks, Can Polar Bears Survive on Land?”)

In 2014, the town of Arviat in Nunavut Territory, Canada, had to cancel regular trick- or-treating and hold Halloween indoors due to concerns that children wandering outside would be at risk of a polar bear attack.

To reduce polar bear’s temptations in Arviat, WWF has been handing out bear-proof metal bins to store food. The nonprofit also hired a polar bear monitor, who uses spotlights and bear bangers—a type of instrument that makes a loud noise—to discourage the bears.

Ewins says that polar bears are going to have to keep adapting as they forage for food.

Until climate change is a little more under control, “it’s going to be a few more decades of these problems for animals that are dependent on ice,” he says.

“We’re trying to help polar bears and local people survive through that transition.”