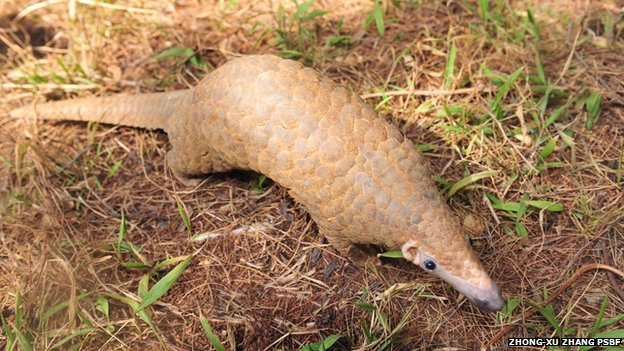 While the poachers were slapped with a fine, the rangers turned around and sold the live pangolins to local restaurants for a reported $56 a kilo, netting a total of $11,300 for the Critically Endangered mammals, reports the Thanh Nien Daily.

The decision to sell off the pangolins has sparked sharp criticism of Bac Ninh’s Forest Management Department from the conservation group, Education for Nature-Vietnam.

“Any violations regarding the animals should receive criminal punishment. We also can’t treat them simply as evidence of a crime and then trade them,” Nguyen Thi Phuong Dung, deputy director of Education for Nature-Vietnam, told the Thanh Nien Daily. He called the decision a “failure” to protect wildlife.

Le Van Minh, the head of Bac Ninh’s Forest Management Department, however contested that the pangolins were too weak to be saved. Moreover, he cited a 2013 law that allows limited trade of pangolins by authorities. But a more recent law from last year—Government Decree No. 160—raised pangolins to a full-protected status in Vietnam, meaning they can’t be traded even by government authorities. Instead, they must be rereleased if in good health and handed over to rescue centers if in poor health. The money raised by the pangolin sale has since been confiscated by the federal government.

The IUCN’s Pangolin Specialist Group estimated last year that over a million pangolins had been butchered for their meat and scales in the last ten years—most for consumption in Vietnam and China—making these strange, little-known mammals the most trafficked animals on the planet.