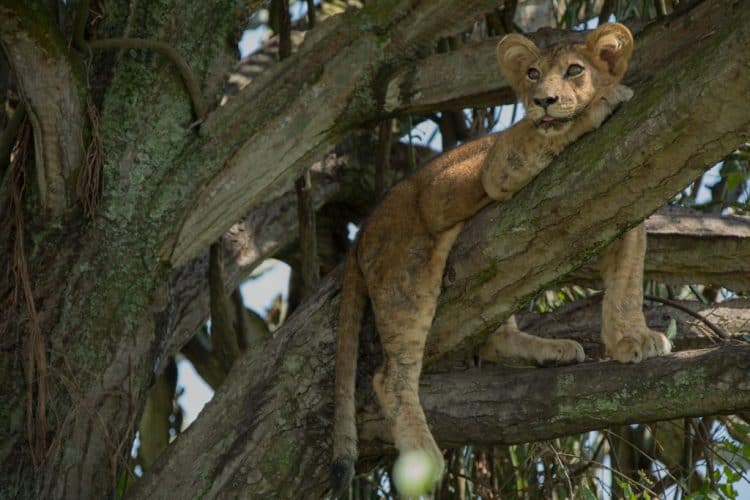 Wildlife authorities found 11 lions dead from suspected poisoning in Uganda’s Queen Elizabeth National Park, in the southwest of of the country, on April 10. The dead lions, eight of them cubs and the other three adult lionesses, were part of a pride that also included three males.

The pride had been filmed along with other lions in the park for a television show focusing on conservation and featuring their habit of climbing and hanging out in the spreading branches of candelabra trees.

This unusual behavior has drawn visitors to the park eager to watch big cat acrobatics. Most lions don’t climb trees, although another pride in the park is a crowd pleaser for climbing fig trees, and other tree-climbing lions have also been spotted in South Africa.

Alex Braczkowski, a National Geographic Explorer who has been researching and filming Uganda’s tree-climbing lions, was in Las Vegas for a photography convention when his assistant called him with the news.

“I broke down, and I started crying,” says Braczkowski, who lives in Durban, South Africa. “I got attached to them because I was following them every day in a vehicle when I was filming them.”

Jimmy Kisembo, a Uganda Wildlife Authority ranger and lion monitor, led a team that discovered some of the carcasses, several of which had been picked clean by hyenas. “I was so upset,” he says. “Everyone on the scene cried. We have no morale.” But, he adds, they’re working hard now to figure out how to protect the remaining lions.

The carcasses and bones, discovered the near a fishing village called Hamkungu, were sent to a regional town, Mweya, for testing, Braczkowski says.

He suspects the lions were poisoned with alidcarb, an insecticide better known as Temik, which he says is cheap and readily available. Aldicarb is a carbamate, which works by preventing a certain enzyme from breaking down the chemical substances that transmit nerve impulses. The buildup of this substance in nerve synapses can cause vomiting, chest tightness, difficulty breathing, and death. Death is usually caused by suffocation.

The Uganda Wildlife Authority believes that the lions were poisoned in retaliation for killing villagers’ cattle. But there aren’t any suspects yet, according to Brackowski, who’s in contact with park authorities.

Aldicarb has been used to poison both wild and domestic animals. Burglars in South Africa have used it to poison dogs to keep them from barking, and there are reports of it being used to poison rhinos, vultures, leopards, as well as lions.

The intentional poisoning of wildlife is not uncommon throughout eastern Africa, as cattle herders and big carnivores like lions increasingly come into contact with people. In 2015 three members of Kenya’s famous Marsh pride died when they ate the meat of a cow whose carcass had been laced with pesticide. The poisoning was likely retaliation against the lions for killing herders’ cows. Eleven vultures also died after scavenging the carcass.

There are a handful of fishing villages within Queen Elizabeth National Park’s boundaries. In one, Hanjungu, cattle owners sometimes let their animals go beyond the village limits, where the grazing is better. Lions in the area see easy prey walking right into their territory and attack.

At last count, in 2008, the park had some 120 lions, but Braczkowski, who’s also been surveying the population, says there will be updated numbers soon.

In Hamkungu, a veterinarian named Ludwig Seifert runs the Uganda Large Carnivore Program, which does wildlife research and monitoring. It also carries out community-based conservation programs that seek, among other things, to compensate herders, at market value, for any cows killed by predators.

Braczkowski says four lions in Queen Elizabeth park died by poisoning in 2017, and he worries that if the killings go on at the present rate, the park will be devoid of lions five years from now.

Park officials plan to take a tougher stance against cattle grazing in the park and are considering bringing in adult lionesses from another pride to encourage breeding and get the numbers up.

Africa’s lions have declined 90 percent during the past 75 years as a result of habitat loss and greater contact with humans, according to National Geographic Society’s Big Cats Initiative.

This article was first published by National Geographic on 13 Apr 2018.

A horrible way for our precious wildlife to suffer and die. Who do these people think keep this planet inhabitable? Certainly not humans.

THIS REALLY IS HEARTBREAKING AND CRUEL BEYOND MEASURE ! I TRULY HOPE THAT WHO DID THIS WILL BE FOUND AND THROWN OVER A CLIFF !!