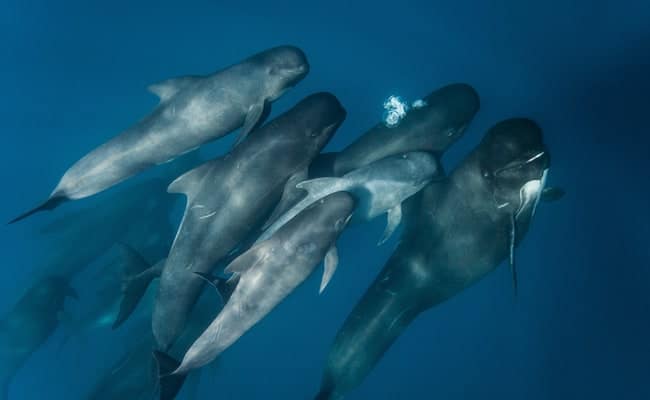 Conservationists are mourning the loss of 84 pilot whales who were killed in the first hunt to take place in the Faroe Islands this year, but they’re also working tirelessly to see hunts in this region come to an end.

During the hunts that take place in the Faroe Islands every year – otherwise known as grindadráp or “the grind” – entire pods of pilot whales and other small cetaceans are driven into a bay by boats where water turns red with blood as they’re all brutally slaughtered.

Supporters continue to defend the killing as a community-based tradition that supplies food for residents, is regulated and done humanely, but the meat isn’t needed and witnesses argue it’s anything but quick and painless for the whales who suffer the stress of roundups and being killed in front of their family members.

Robert Read, Chief Operating Officer at Sea Shepherd UK, described the most recent horror, writing, “The Faroese grindadráp is incredibly cruel with suffering caused during several hours while the pod is driven by dozens of boats. The pilot whales are then killed over an extended period (from minutes to sometimes hours) in front of their entire family while beached on sand, rocks or just struggling in shallow water until not a single pilot whale is left. The Faroese have no mercy. Every pilot whale in the pod is killed including pregnant mothers, juveniles, babies. None are ever spared from the Faroese knives.”

Sea Shepherd has continued to maintain a presence there during these hunts and has raised much awareness by documenting the tragic, senseless and violent loss of lives that has drawn global condemnation. Still, the hunts continue, as Read points out, with no season, no quota and no idea of how many animals they actually need to kill. This year, reports concerning the number of pilot whales being rounded up continued to change and it was unclear how many were actually killed until the final body count was made.

A total of 84 long-finned pilot whales were killed, but now there’s hope that those allowing this to go on will be held accountable.

Even though the Faroese are self-governing, Denmark controls everything from the police to currency and trade with members of the EU. Sea Shepherd is now working to hold Denmark accountable for not only allowing these hunts, but taking actions that support them.

Earlier this month, with the support of 27 Members of the European Parliament, Sea Shepherd Netherlands formally submitted a complaint to the European Commission requesting infringement proceedings against Denmark for facilitating the slaughter of cetaceans who are otherwise protected under the Conservation of Natural Habitats and of Wild Fauna and Flora (Habitats Directive) in the EU.

“It is forbidden to kill whales and dolphins in Europe,” said Sea Shepherd Netherlands Director Geert Vons. “By supporting the Faroe Islands in the killing of pilot whales and other cetaceans, Denmark facilitates the slaughter and fails to fulfill its EU obligations. The government of Denmark has shown it’s willing to do whatever it can to ensure that the slaughter continues.”

Hopefully Sea Shepherd’s efforts this year will deliver a huge blow and send a message that the world is no longer willing to tolerate whaling or cruelty to animals in the name of tradition, and that these hunts will soon come to an end.

You can help by signing and sharing Sea Shepherd’s petition asking the European Commission to stop Denmark from continuing to facilitate whaling in the Faroe Islands.

we live on a techno savvy planet,
yet what we do best is try to
sh*t can it.
to those who slaughter
our fellow citizens here,
we send this message
loud and clear.
we will stand for all species
that dwell
on what was once a heaven
and is now a hell.
we will not be quiet
we will not walk away.
until compassion rules
our world
our voices are here
to stay.
klk

HALF THE WORLD ARE THICK !! I AM SICK TO DEATH OF THE TORTURE AND KILLING OF THE INNOCENT ANIMALS WHO ARE HERE TO “LIVE” THE SAME AS US !!

I am no more startled, at the amount of Cultural Idiocies on this earth!!. They DEMON…strate.. their lack of Compassion, and Empathy, towards the Helpless and the Innocent, then use this Barabarous event as an education to teach their children!!!. May the Ocean swallow them up in due time!!

….and this is condoned in a first world country such as the Faroe Islands and Denmark. Shame on you for accepting this savagery!