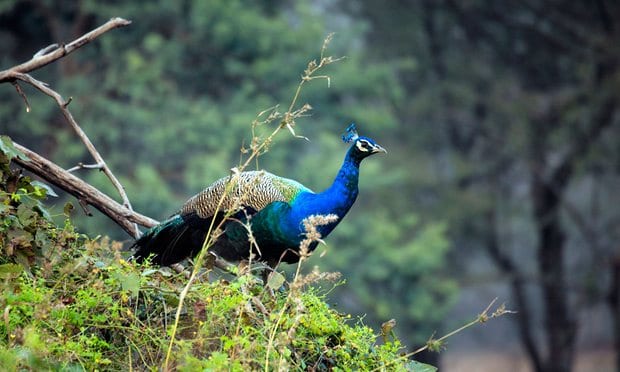 There was a flash of the richest blue, as the bird emerged from the forest and strutted across the path in front of us. Instantly recognisable, yet at the same time oddly unfamiliar, it lifted its neck and flicked an enormously long tail, before melting into the vegetation, never to be seen again.

Encountering a peacock in the wild, in its native India, is a surreal experience. I regularly see them in the grounds of Bath Spa University’s Corsham Court, where they strut around as if they own the place. Yet now I was watching them in the fields and forests of India’s most populous state, home to the second Uttar Pradesh Bird Festival.

The peacock – or Indian peafowl, to give the bird its correct name – wasn’t the only familiar sight and sound. Noisy flocks of rose-ringed parakeets tore across the sky like a bright green version of the Red Arrows, while we also came across a red junglefowl, the ancestor of the domestic chicken, looking for all the world like a farmyard cockerel.

Other birds were more exotic and unfamiliar. Graceful black-winged kites floated overhead, while long-tailed shrikes perched on the walls. Hume’s warblers constantly uttered their distinctive disyllabic call from the dense foliage of the trees above our tents, though these tiny birds, which migrate here from north of the Himalayas, were frustratingly tricky to see. This species was named after the Victorian bird collector and colonial administrator Allan Octavian Hume, who has been dubbed the father of Indian ornithology, and in later years also helped found the Congress Party.

Each day, after we had enjoyed talks from both Indian and foreign ornithologists, we headed out into the surrounding countryside. If it were an independent country, Uttar Pradesh would rank sixth in terms of population – behind only China, India, the United States, Indonesia and Brazil – so you might imagine that there are few places where birds can find sanctuary. Yet during our visit we collectively saw well over 200 different species.

These included one of the world’s largest birds, the stately sarus crane, whose name derives from a Hindi word meaning “bird of the lakes”; along with some of the smallest, such as the red avadavat, a tiny finch with a rich crimson plumage that perches on strands of elephant grass to feed on the seeds.

On a boat trip along the mighty Chambal River we caught up with bar-headed geese, great thick-knees – a relative of our own stone-curlew – and black-bellied terns. But for many of us, the highlight was catching sight of the critically endangered Indian gharial, a slender, long-snouted crocodilian seen basking on the mudflats.

Our final destination was Dudhwa National Park, close to India’s border with Nepal. Here we marvelled at vast flocks of waterbirds, with a dozen species of ducks, sixteen different kinds of herons, storks and ibises – including the wonderfully named intermediate egret – and a pair of Himalayan goldenbacks.

This colourful woodpecker was a species I had always wanted to see. That was not just because it is strikingly attractive, but also because before its name was shortened, it used to be the longest of any bird in the world: Himalayan golden-backed three-toed woodpecker. One to include in my current work in progress, a book on the origins of bird names…

This article was first published by The Guardian on 18 Dec 2016.