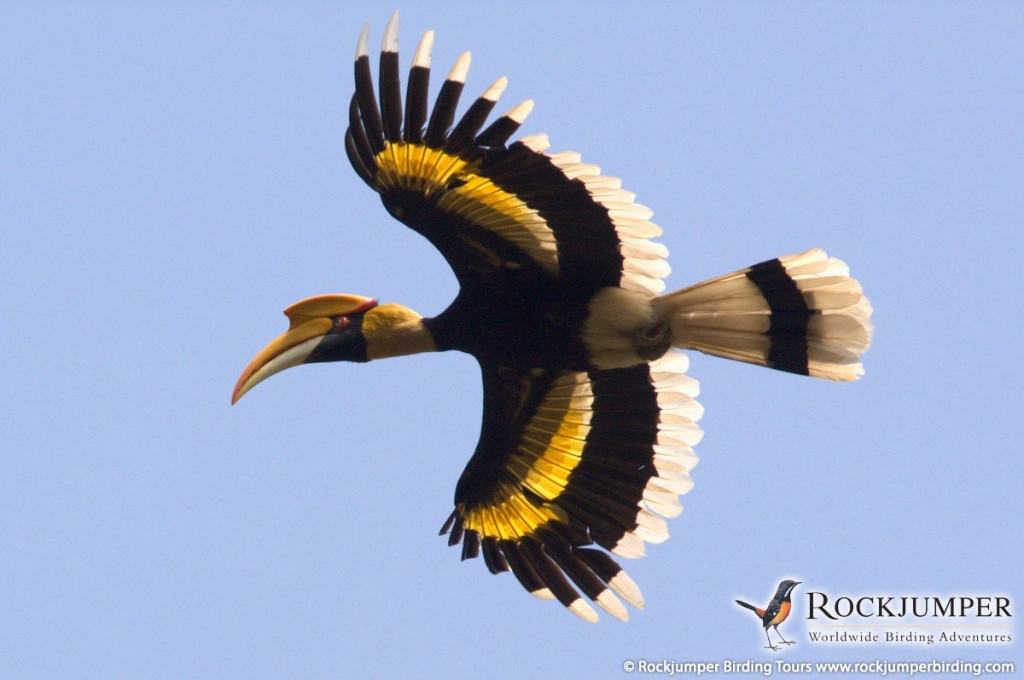 Hornbills are as peculiar, as they are magnificent. Their calls especially, can sound rather strange to the uninitiated—some grunt, some growl, and some cackle maniacally.

These queer birds, with their large brightly-colored curved beaks, and a distinctive cavity-nesting habit, are also totem animals for many tribes in India.

They are oddly fascinating. Yet, there is a lot about them that is still a mystery.

A new study, published in mongabay.com’s open access journal Tropical Conservation Science, attempts to understand these birds a little better. A team of researchers from the Nature Conservation Foundation in Mysore, have examined variation in the densities of four hornbill species—rufous-necked, great, wreathed, and white-throated brown hornbills—in Namdapha Tiger Reserve in the north-eastern Indian state of Arunachal Pradesh. In fact, for the white-throated brown hornbill (Ptilolaemus austeni), these density estimates are probably first of their kind.

Between 2009 and 2012, the team walked over 840 km (522 miles) in Namdapha, recording the number of individuals they saw of each hornbill species, while measuring the perpendicular distance to each flock. They used these measurements to arrive at the densities of each hornbill species within three different areas, each with a different elevation gradient (500m-1450m), and three different time intervals, all within the hornbills’ non-breeding months (November-April).

The researchers found distinct spatial differences in the hornbill densities. While the rufous-necked hornbill occurred in all three sites, the other three hornbill species were restricted to only two out of the three sites. In places where the great and the white-throated brown hornbills did occur, their densities varied across the elevation gradient, being higher in the lower altitudes.

The team also noted that wreathed hornbills, birds with a brightly colored pouch on their necks, reached the zenith of their densities in November-December at about 68 birds per sq. km, and then quickly fell to 1 bird per sq. km. in March-April. The great hornbill densities fluctuated as well, albeit not as strikingly. The densities of rufous-necked and white-throated brown hornbills however, remained more or less invariable across the months.

All in all, Namdapha appears to support a large population of hornbills that “can potentially serve as a source for adjoining unprotected areas, which experience logging and higher hunting pressures and have low hornbill densities,” write the authors. They add that this data can help disclose seasonal movements of these birds, and identify areas that can benefit from protection, for example, the sites where they breed.

However, Namdapha, despite being protected legally, is not particularly well-managed. It faces severe human pressure, including hunting, and clearing-off of its forest patches for cultivation. Yet, hornbills occur here in large numbers.

The authors note that this is “possibly because they are not targeted for hunting by the particular tribal groups that access the park. Therefore, the value of the hornbill populations inside Namdapha, especially of the more threatened species like the rufous-necked and white-throated brown hornbill, needs to be highlighted.”