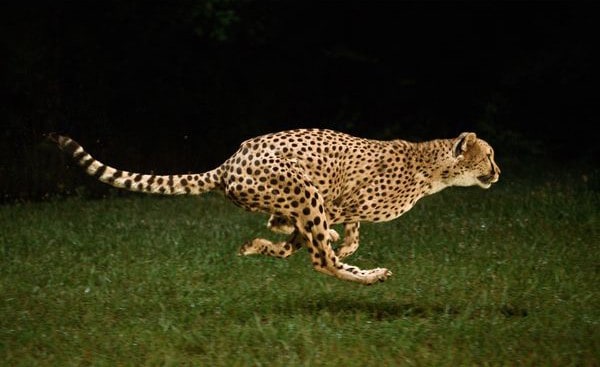 Cheetahs may be the world’s fastest sprinters, but it is their blinding acceleration—faster than a Lamborghini’s—and their phenomenal athleticism, rather than their famous top speed of over 60 miles per hour (96.5 kilometers per hour), that is the true key to their hunting success in the wild, according to the results of a ground-breaking, high-tech study into the biomechanics of wild cheetahs published this week in Nature magazine.

“Pound for pound a cheetah’s acceleration power is about four times that of Usain Bolt during his world-record 100 meters,” says Alan Wilson, professor of locomotor biomechanics at London’s Royal Veterinary College, who led the study. “And what’s more, a cheetah can still accelerate like that even when it is already doing 40 mph, then decelerate nearly as swiftly, turn hard, and sprint in another direction.”

Surprisingly, the cheetahs in the study group seldom hit their top gear. The fastest speed the group recorded was 58 mph (93 kph)—well short of the anecdotal 70 mph (112.7 kph) often claimed for cheetahs in the wild. “I suspect that in more open areas like the Serengeti they may go a bit faster,” says Wilson. “But most of the chases we recorded in Botswana involved relatively modest speeds. What we did record, however, [were] some of the highest values for acceleration, deceleration, and body-mass power [the amount of energy generation per kilogram] ever measured for any terrestrial animal.”

To put a cheetah’s athleticism into perspective consider this: Usain Bolt churned out about 25 watts of energy per kilogram of body weight during the course of his 9.58-second 100-meter world-record sprint. Nature’s other great sprinters, racehorses and greyhounds, generate 30 watts and 60 watts, respectively, but the wild cheetahs in the study went off the power-meter charts, generating 120 watts per kilogram of body weight.

To obtain the data for the study the team attached tracking collars equipped with a global positioning system (GPS), accelerometers, and gyroscopes to five wild cheetahs in Botswana’s Okavango Delta and monitored them closely over a period of 17 months.

Whenever observers detected hunting-like behavior starting to take place, they activated the devices in that cheetah’s collar and began collecting data. As the cheetah launched into its sprint, the collar would beam back information on the big cat’s speed, its rate of acceleration, and its heart-stopping deceleration in the hairpin turns, as well as plotting every twist and doubling-back throughout the chase. The collar’s GPS could plot the cheetah’s course on a map, giving scientists a precise route of each run, along with a continuous stream of speed and motion data.

In all, 367 “hunting runs” were recorded. The state-of-the-art collars recorded everything from a cheetah’s turning radius at speed, to the wattage produced by its muscles during acceleration, to the various forces applied to its body throughout the twisting, turning chase.

Next year the group plans to raise the bar still further, using aircraft, aerial cameras, and remote-sensing technology to plot cheetahs’ impala-chasing sprints on 3-D maps of the terrain.

“What we are hoping to do next is get an idea of the cheetahs’ understanding and use of the terrain when they stalk their prey and launch into their sprints,” says Wilson.

This article was written by Roff Smith for National Geographic News