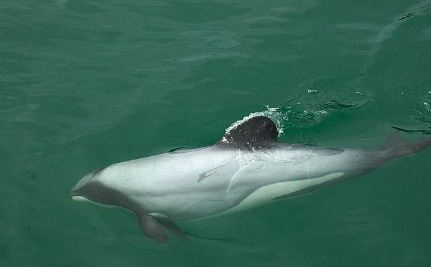 At just 1.2 to 1.4 meters long and about 110 pounds, Maui’s dolphin is the smallest in the world. It is also found only on the west coast of New Zealand’s North Island — and it is critically endangered. A 2012 survey commissioned by the New Zealand government’s Department of Conservation found that there were only about 55 Maui’s dolphins left above the age of one.

New Zealand’s government has proposed a new protection zone for Maui’s dolphin and called for new restrictions on commercial fishing in the form of a ban on the use of set nets by 350 square kilometers. Environmentalists say that the zone only covers a small portion of the dolphin’s habitat and that, without extending this, the dolphins have been given a “death sentence.”

Maui’s dolphins could even go extinct within 20 years. There are estimated to be only about twenty breeding females. The black and white cetaceans are a subspecies of Hector’s dolphin, the only endemic cetacean in New Zealand.

Conservationists trace the decline of the dolphin’s numbers to the use of nylon filament nets starting in the 1970s. Maui’s dolphin lives in waters up to 100 meters deep and their numbers have been severely affected due to trawling and set nets.

Dr Elizabeth Slooten of the University of Otago, who has studied Maui’s dolphin for 30 years, makes it very clear that the New Zealand government’s proposed protective zone is insufficient and leaves some 75 percent of the dolphin’s habitat still vulnerable.

Asserting that the New Zealand government must protect Maui’s dolphin in waters up to 100 meters deep, the International Whaling Commission and the Society for Marine Mammology are urging that fishing nets be removed from the Maui’s habitat. A German conservation group, NABU International, is planning to mount a legal challenge to the proposal in the New Zealand High Court. It has also called for a boycott of seafood from the country and raised concerns about the effects of seismic surveying by oil companies on dolphins as well as whales.

“New Zealand’s failure to protect the world’s smallest and rarest dolphin is a bitter blow to marine conservation.

“New Zealand has ignored the facts and the advice of the world’s scientific community to accommodate the commercial interests of its fishing industry.”

Without sufficient (i.e., real) protections, Maui’s dolphin could be fated to disappear forever just as has happened to the the “river pig,” a porpoise that long made its home in China’s Yangtze River.

The Case for Legal Rights for Animals (and Some History)

These threats to the very existence of more than a few of the world’s cetaceans are precisely why some environmentalists and others have been making the case that whales, dolphins and other endangered cetaceans must have the equivalent of human rights.

Anyone who thinks such arguments nonsensical need only take a look back at history and specifically that of the medieval period in Europe. As Edward Payson Evans detailed in a book entitled “Animal Trials,” trials in which “caterpillars, flies, locusts, leeches, snails, slugs, worms, weevils, rats, mice, moles, turtle doves, pigs, bulls, cows, cocks, dogs, asses, mules, mares and goats” were criminally prosecuted and executed were not uncommon. Animals found “guilty” of killing humans were actually sentenced to death and sent to the gallows after being summoned, cross-examined and defended (not, evidently, successfully) by lawyers.

While many recorded cases describe animals meeting grisly ends — all while, in some cases, their owners were compensated by the loss from the execution of their animals — some also offer a glimpse of a very, very nascent sense that animals had some claims. As Michael Grayson writes in the London Review of Books,

… a public meeting was called in the French town of St Julien to discuss whether an alternative home could be provided for a species of weevil known as curculio, which had laid waste the local vineyards. It was agreed that a piece of land should be set aside for the insects, provided that the inhabitants of St Julien retained certain rights. The weevils’ lawyer rejected the compromise, declaring that ‘he could not accept for his clients the offer made by the plaintiffs, because the place was sterile and neither sufficiently nor suitably supplied with food for the support of the said animals.’ The final outcome of this wrangling is unknown: ‘the last page of the records has been destroyed by rats or bugs of some sort.’

By the late medieval period, signs of a change in thought are apparent, with humans being charged with leaving their “beasts without a good and sure guard’ (an incipient form of negligence)” and as a result responsible for any acts carried out by an animal.

Ironically, one of the reasons that academics and animal rights advocates have been asserting that cetaceans should be granted legal rights is precisely because humans (commercial companies, oil companies, governments) have not been taking sufficient responsibility for their activities. The alarmingly small numbers of Maui’s dolphins are a stern wake-up call that we need to do so and soon, or face the uncomfortable truth that we have become these dolphins’s unwitting executioners.

We invite you to vote whether the Maui’s Dolphin should be protected by the Government of New Zealand. Even if you’re not from New Zealand, please vote and also leave your comments at the bottom of this page.

Save the Maui’s Dolphin

This editorial content of this article was written by Kristina Chew for Care2.com