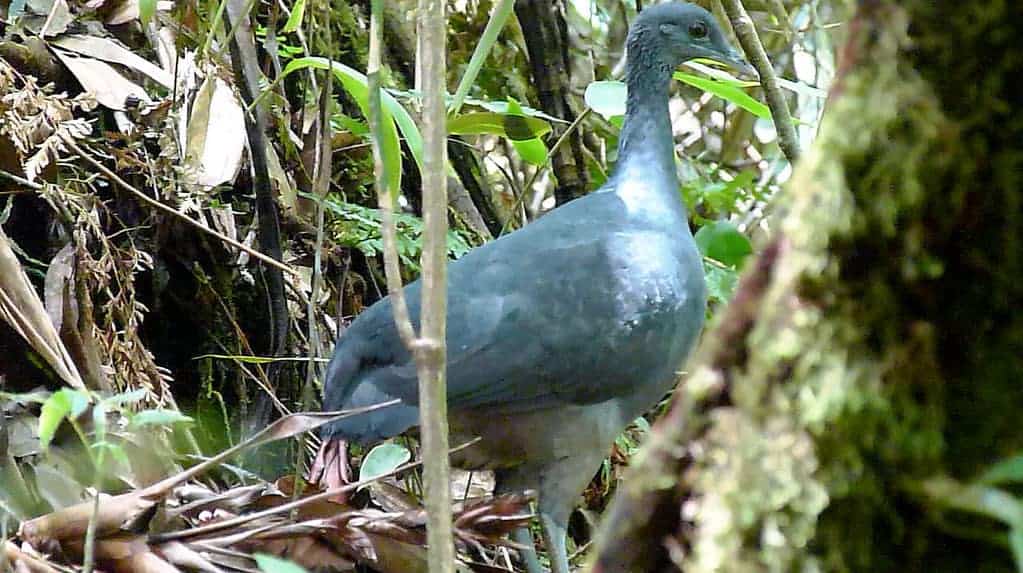 After decades in ornithological obscurity, one of the world’s least-known birds is finally coming to light thanks to the persistence of a small group of researchers.

Pablo Negret, Oscar Garzón, Pablo Stevenson, and Oscar Laverde-R. of the Universidad de los Andes have just published the results of their year-long study of the Black Tinamou (Tinamus osgoodi hershkovitzi) in The Auk: Ornithological Advances, including new ecological information as well as some of the first video and sound recordings of this elusive species.

The Black Tinamou is a chicken-sized bird found in the foothills of the eastern Andes, where it lives in tall, dense primary forest.

It is extremely difficult to observe due to its secretive habitats and cryptic coloration. For their study, Negret and his colleagues focused on the southern Colombia subspecies, doing daily censuses in Alto Fragua Indi Wasi National Park, recording vocalizations, and setting up camera traps to capture images and video.

“The most challenging part of the fieldwork was the 4 to 6 kilometer walk along the transect’s steep trails each morning, from 800 to 1600 meters above sea level. However, these walks also gave me extraordinary moments like the observation of a Puma concolor along the trail or the moment when I had the chance to photograph the elusive Tinamus osgoodi after almost 9 months of trying,” says Negret.

Through their observations, he and his colleagues were able to determine that Black Tinamous likely breed in March and April (when their vocal activity peaks), are most active in late morning, and eat primarily fallen fruit and seeds.

Black Tinamous live in an area where they are threatened by logging, cattle ranching, and hunting, and this study is an important step forward in gathering the information needed to effectively protect them. “Tinamous are widespread in Central and South America, and yet we know very little about the ecology and general biology of most species,” according to Patricia Brennan, a University of Massachusetts Amherst professor and tinamou expert.

“However, tinamous are ancient birds, with a combination of many unique traits that include male parental care, female communal egg laying, and some of the most beautiful and conspicuous eggs in nature. The authors of this paper have gathered new information about one of the least-known tinamou species, and therefore they contribute significantly to our knowledge of this fascinating group of birds.”

This article was first published by Phys.org on 09 Apr 2015.