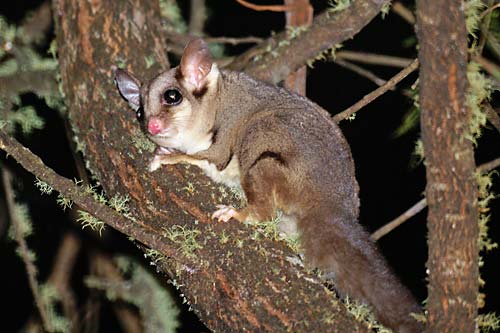 Sweet-faced and wide-eyed, the Sugar Glider has become such a popular exotic pet in Malaysia that the country’s authorities want to put it on the protected animal list, to track the burgeoning trade better. These small, shy nocturnal creatures are found only in the forests of eastern Indonesia, Papua New Guinea and Australia. Most of those available in Malaysian pet shops originate from Indonesia.

Sugar Gliders Petaurus breviceps are not fully protected under Indonesia’s wildlife laws, but are subject to a Government issued quota that dictates how many can be taken out of the wild each year. In 2011 this quota supposedly restricted the harvest to just 225 individuals per year.

However, Malaysia’s Department of Wildlife and National Parks, Perhilitan, currently has almost 9,000 Sugar Gliders registered with the Department, suggesting quotas are being exceeded, and their records suggest that the number of animals entering the country is on the increase.

The species is not currently listed as protected under Malaysia’s Wildlife Conservation Act 2010 or International Act 2008 and Perhilitan recently announced they are taking steps to remedy this. Dr Zaaba Zainol Abidin, Perhilitan’s Deputy Director stated that the Department wants to protect the species from the illegal wildlife trade, which is quite rampant.

“We support these efforts to provide better protection against illegal wildlife trade, which in many countries appears to continue with little interruption from the authorities.” “Current levels of trade in wild-caught Sugar Gliders not only indicate that quotas are being ignored, but also suggest trade may potentially be a serious threat to this species.”

Sugar Gliders tend to sleep in groups, making it easy for collectors to gather large numbers in a short time. While there may be some captive-breeding of this species in Indonesia, the vast majority are taken from the wild.

This article was written and published by TRAFFIC.