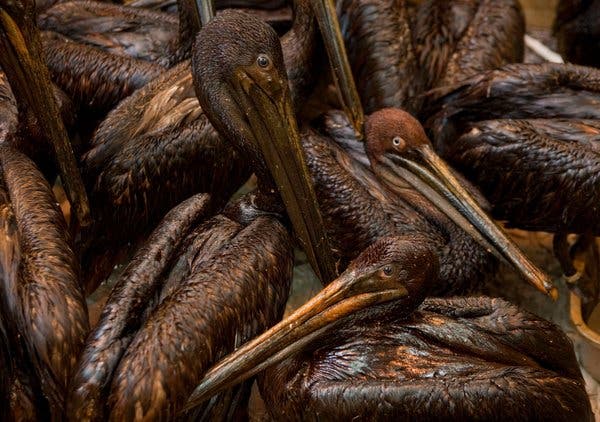 WASHINGTON — As the state of Virginia prepared for a major bridge and tunnel expansion in the tidewaters of the Chesapeake Bay last year, engineers understood that the nesting grounds of 25,000 gulls, black skimmers, royal terns and other seabirds were about to be plowed under.

To compensate, they considered developing an artificial island as a haven. Then in June 2018, the Trump administration stepped in. While the federal government “appreciates” the state’s efforts, new rules in Washington had eliminated criminal penalties for “incidental” migratory bird deaths that came in the course of normal business, administration officials advised. Such conservation measures were now “purely voluntary.”The state ended its island planning.

The island is one of dozens of bird-preservation efforts that have fallen away in the wake of the policy change in 2017 that was billed merely as a technical clarification to a century-old law protecting migratory birds. Across the country birds have been killed and nests destroyed by oil spills, construction crews and chemical contamination, all with no response from the federal government, according to emails, memos and other documents viewed by The New York Times.

Not only has the administration stopped investigating most bird deaths, the documents show, it has discouraged local governments and businesses from taking precautionary measures to protect birds.

In one instance, a Wyoming-based oil company wanted to clarify that it no longer had to report bird deaths to the Fish and Wildlife Service. “You are correct,” the agency replied.

In another, a building property manager in Michigan emailed the Fish and Wildlife Service to note that residents had complained about birds being killed while workers put up siding and gutters around the apartment. Not to worry, the agency replied: “If the purpose or intent of your activity is not to take birds/nests/eggs, then it is no longer prohibited.”

And when a homeowners’ association in Arizona complained that a developer had refused to safely remove nesting burrowing owls from a nearby lot, Fish and Wildlife said that, because of the new legal interpretation, it could not compel the developer to act.

“Of course, we just got sued over that interpretation, so we’ll see how it ends up,” the enforcement officer wrote.

The revised policy — part of the administration’s broader effort to encourage business activity — has been a particular favorite of President Trump’s, whose selective view of avian welfare has ranged from complaining that wind energy “kills all the birds” to asserting that the oil industry has been subject to “totalitarian tactics” under the Migratory Bird Treaty Act of 1918.

Habitat loss and pesticide exposure already have brought on widespread bird-species declines. The number of adult breeding birds in the United States and Canada has plummeted by 2.9 billion since 1970.

Now, said Noah Greenwald, the endangered species director for the Center for Biological Diversity, the Trump administration has engineered “a fundamental shift” in policy that “lets industrial companies, utilities and others completely off the hook.” Even a disaster like the Deepwater Horizon oil spill of 2010, which killed or injured about a million birds, would not expose a company to prosecution or fines.

Gavin Shire, a spokesman for the Fish and Wildlife Service, the agency responsible for protecting migratory birds, said in a statement that other federal laws like the Endangered Species Act remain on the books. The Trump administration, he said, “will continue to work cooperatively with our industry partners to minimize impacts on migratory birds.”

The documents tell a different story.In nearly two dozen incidents across 15 states, internal conversations among Fish and Wildlife Service officers indicate that, short of going out to shoot birds, activities in which birds die no longer merit action. In some cases the Trump administration has even discouraged local governments and businesses from taking relatively simple steps to protect birds, like reporting fatalities when they are found.

“You get the sense this policy is not only bad for birds, it’s also cruel,” Mr. Greenwald said.

The Migratory Bird Treaty Act was originally enacted to protect the birds from over-hunting and poaching at a time when feathered hats were all the rage and the snowy egret was hunted almost to extinction. It makes it illegal “by any means or in any manner” to hunt, take, capture or kill birds, nests or eggs from listed species without a permit.

Beginning in the 1970s, federal officials used the act to prosecute and fine companies up to $15,000 per bird for accidental deaths on power lines, in oil pits, in wind turbines and by other industrial hazards.

Kathleen Sgamma, president of the Western Energy Alliance, an oil and gas trade association, said fossil fuel companies had been unfairly targeted by the law, pointing to an Obama administration prosecution of seven oil companies in North Dakota for the deaths of 28 birds.

“It felt like it was weaponized against one industry,” she said.

Changes to the interpretation of the law topped the association’s wish list for the Trump administration. Six months after that list was released, the Interior Department ended prosecutions for bird deaths “when the underlying purpose of that activity is not to take birds.”

If landowners destroy a barn knowing it is filled with baby owls, they would not be liable, as long as the intent was not to kill owls, the opinion said. The illegal spraying of a banned pesticide would not be a legal liability either as long as the birds were not the “intended target.”

In the case of a bridge and tunnel project in Hampton Roads, Va., Stephen C. Birch, the commissioner of the Virginia Department of Transportation, said the agency was seeking an alternate solution for the seabirds. A spokeswoman for the agency said the Trump administration’s opinion “had no direct impact” on the decision to abandon the bird island.

But conservationists who had been working closely with the state to protect the seabirds’ nesting grounds said they had no doubt it had a chilling effect.

“The dynamics really changed,” said Sarah Karpanty, a professor of fish and wildlife conservation at Virginia Tech and a member of the team that had been working with the state. “They were basically conservation partners, and in 2017 all indications were that they were going to be a conservation partner again. Then the solicitor’s opinion changed everything.”

The loss of the Hampton Roads nesting area will devastate some bird species because it was the last they had. Other sites in the Chesapeake Bay have been lost to sea level rise and erosion.

The birds, now south for the winter, will return in March and April to land that has been paved. Construction crews may have to take aggressive measures to prevent the birds from nesting wherever they can, like in cracks in the asphalt.

“If there’s no new habitat construction, they will most likely not reproduce,” Ms. Karpanty said. “The frustrating thing is about this situation is, there is a solution, a relatively easy solution.”

In another case, the United States Coast Guard notified the Fish and Wildlife Service in January 2018 that it had identified a vessel responsible for an oil spill near Woods Hole, Mass., that killed about two dozen sea birds. Federal wildlife police replied that because the “birds protected by the Migratory Bird Treaty Act” were killed incidentally, “there’s currently no enforcement action plan.”

In other cases, states and companies are still acting voluntarily. In June 2018 a state official in Michigan alerted the Fish and Wildlife Service that a logger had spotted a great blue heron rookery in a red pine forest and wanted to know how to proceed. The federal agent replied that while the effort to minimize harm to the birds was appreciated, action was considered “strictly voluntary and not required in any way.”

In that instance, the company worked with the state to agree on a 300-foot buffer around the nests where no commercial activity would occur until after nesting season, said Dan Kennedy, an endangered species coordinator with the Michigan environment office.

Sarah Greenberger, senior vice president for conservation at the Audubon Society, said such voluntary actions cannot be counted on.

“I’m sure there are still conscientious actors who are taking steps,” she said. “But we don’t know that, and we don’t know how long they will continue to do that, especially if their competitors aren’t.”

“There’s a balance here as to what extent should something that happened to a bird be criminalized, versus how do we ensure that they’re protected,” he said.

Builders, developers and property managers are also benefiting. In Washington D.C., the district’s Department of Energy and Environment asked Fish and Wildlife in July 2018 to help resolve a puzzling issue: a condominium had installed netting to keep birds out of its insulation, but the net was instead trapping songbirds and migratory birds, “many who do not make it out and end up dying.”

The Trump administration replied that migratory birds that are killed “non-purposefully” arenot subject to enforcement and offered voluntary guidelines.

“It’s part of a broader dirty blanket that the administration is using over the whole environment,” said Tommy Wells, director of the district’s energy program. He fears that administration policies could reverse a resurgence of wildlife in the city.

In Albuquerque, N.M., Alan Edmonds, an animal cruelty case manager with New Mexico’s animal protection agency, pushed back after the Fish and Wildlife Service gave only a verbal warning to a company that had trapped and killed a Cooper’s hawk. The agency replied that, without proof that the company wanted to kill the hawk, “we can’t do anything.”

Mr. Edmonds said the company received “not even a slap on the wrist.” He acknowledged the hawk was just one bird. But Ms. Greenberger of the Audubon Society said, “This is how we lose birds.”

“We don’t lose them a billion at a time,” she said. “We lose them from small incidents happening repeatedly over the vast geography of our country.”

This article was first published by The New York Times on 24 December 2019.