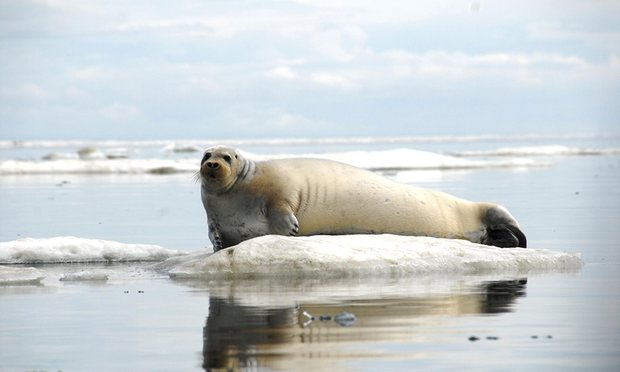 Species can be listed as “threatened” and receive protection based on climate change projections that stretch until the end of the century, a federal appeals court has ruled, in a decision that could have major implications for the fate of animals as their environment rapidly changes.

A three-judge panel at the US ninth circuit court unanimously rejected an appeal by a coalition of oil companies, the state of Alaska and indigenous Alaskans to prevent a subspecies of the Pacific bearded seal from getting federal protection.

The federal government’s National Marine Fisheries Service (NMFS) decided that the Alaska-based populations of bearded seals would “almost certainly” be at risk of being wiped out due to disappearing Arctic sea ice by 2095.

Alaska, along with the oil companies, argued that listing the species as threatened wasn’t warranted because the climate predictions were speculative. The appeals court disagreed, potentially opening the way for other species to be protected due to long-range climate forecasts.

“The service need not wait until a species’ habitat is destroyed to determine that habitat loss may facilitate extinction,” the judges’ ruling states.

“The fact that climate projections for 2050 through 2100 may be volatile does not deprive those projections of value in the rule making process. All parties agree that there will be sea ice melt; the only uncertainty is the magnitude of warming, the speed with which warming will take place, and the severity of its effect.”

The court noted the position taken by the “overwhelming majority” of the world’s climate scientists who warn that diminishing sea ice, caused by warming temperatures, will pose an existential threat to species such as seals that depend upon the icy environment for mating, birthing and feeding.

Observational data from 2010 showed that the bearded seals’ habitat in Alaska had 40% less summer sea ice than the long-term average. Winter sea ice in the Bering and Okhotsk seas off Alaska and Russia is expected to decline by at least 40% by 2050, with summer ice forecasted to largely disappear.

The ruling is the first to affirm the federal government’s right to protect species because of climate models stretching until the end of the century. In 2008, the polar bear was listed as threatened based on loss of sea ice, although the forecast in that case will end in 2050.

“This is a huge victory for bearded seals and shows the vital importance of the Endangered Species Act in protecting species threatened by climate change,” said Kristen Monsell, an attorney at the Center for Biological Diversity who argued the case.

“This decision will give bearded seals a fighting chance while we work to reduce the greenhouse gas emissions melting their sea-ice habitat and keep dirty fossil fuels in the ground.”

The decision may be challenged by Alaska, which said such listings could hinder economic development in the state for little environmental benefit.

“If this opinion stands, the National Marine Fisheries Service would list a species that is abundant and in good health based on the claim that climate change will impact habitat over the next 100 years and may cause harm,” said Brad Meyen, senior assistant attorney general for Alaska.

This article was first published by The Guardian on 25 Oct 2016.