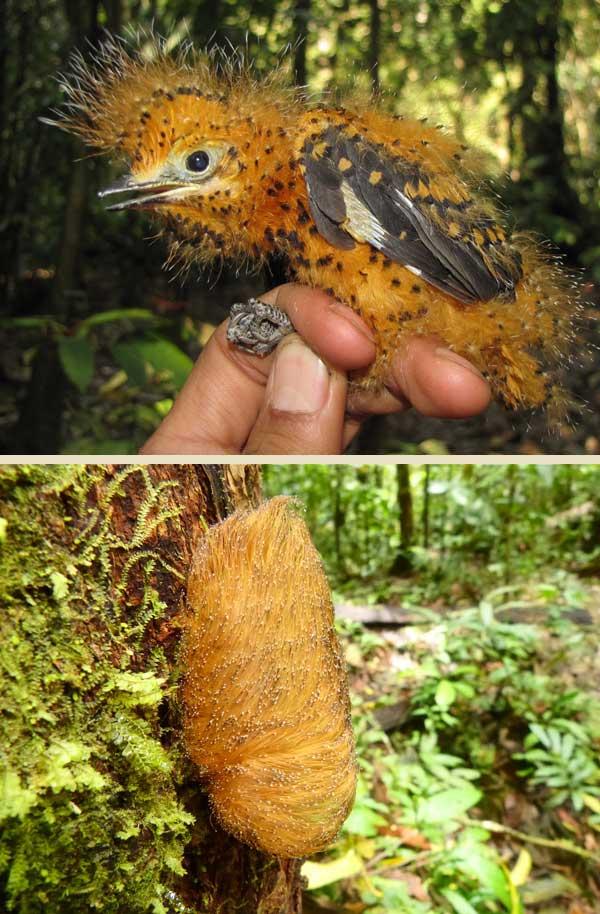 In a study published in the January 2015 issue of The American Naturalist, Gustavo A. Londoño, Duván Garcia, and Manuel Sánchez Martínez report a novel nesting strategy observed in a tropical lowland bird that inhabits an area with very high losses to nest predators.

How can tropical birds cope with the high rates of nest predation that are typical in most tropical habitats? Are there nesting strategies that allow tropical birds to escape predators such as birds, mammals, and snakes that regularly eat eggs and nestlings?

During the fall of 2012, while working on a long-term avian ecological study, the researchers discovered the second nest ever described for the cinereous mourner (Laniocera hypopyrra) at Pantiacolla Lodge in the upper Madre de Dios River in southeastern Peru.

They observed that upon hatching, the chicks had downy feathers with long orange barbs with white tips, which was very different from any other nestling they had observed in the area. The peculiar downy feathers attracted their attention, but the nestling behavior provided a more important cue.

While researchers were collecting morphological measurements, the nestling started moving its head very slowly from side to side in a way typical of many hairy caterpillars.

While working in the area, the investigators found a poisonous caterpillar with similar size and hair coloration as the nestling. Therefore, the researchers suggest that this is an example of Batesian mimicry in which the nestling tricks predators into thinking that it is a toxic, spiny caterpillar rather than a highly edible nestling.

This remarkable adaptation may well have evolved to decrease nest predation probability, increasing nesting success in this species. Examples of Batesian mimicry are very rare in vertebrates.

This article was first published by Phys.org on 23 Feb 2015.

Makes me wonder if some bird species we've not yet found has chick hatchlings that look like the poison dart frogs…I think that's not impossible, seeing this! 🙂

Good to hear about your birding trip to Costa Rica – it would be even better to see some of your great photos – please share them on the link: https://focusingonwildlife.com/news/photo-competition/

simply amazing to see and learn

Sheri, that’s a very good question! I think Supertrooper is the author of the article.

Who is this “Supertrooper,” and why is he eating baby birds??