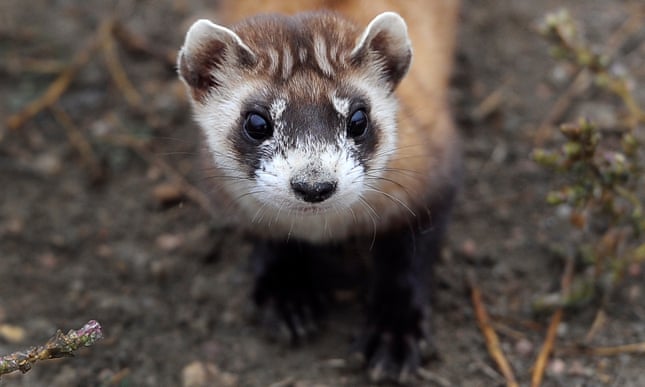 Every year, from August to November, Travis Livieri becomes nocturnal. The field biologist goes out in his truck in Conata Basin, South Dakota, armed with a spotlight in search of one of the most endangered mammals in North America: the black-footed ferret. When the light catches the reflective green shine of the ferret’s eyes, he waits for the animal to disappear into a burrow and then lays a trap at the entrance.

Once the ferret is trapped, Livieri coaxes it into a long black tube and anaesthetises it before giving it a vaccine shot. Then he takes a blue marker and draws a line from the ferret’s left ear to its right shoulder.

About a month later, he returns again at night to the same location to give the ferret its booster, drawing a line from its right ear to its left shoulder. Ferrets marked with an X are safe from the plague.

Although they have been protected by the US Endangered Species Act since it was signed into law in 1973, there are only about 300 black-footed ferrets alive in the wild today, spread across about 20 sites in the western US, Canada and Mexico.

Every one of them is descended from just 18 ferrets that were taken into a captive breeding programme in the 1980s, after conservationists failed to keep the last-known population alive in the wild.

Habitat loss and the widespread shooting and poisoning of prairie dogs, a herbivorous rodent that makes up more than 90% of the ferret’s diet, are both threats to the black-footed ferret. But nothing poses a greater existential threat than the bacteria Yersinia pestis – otherwise known as plague.

Yersinia pestis, which killed millions of people across Europe in the middle ages, is the ferrets’ biggest biological enemy, says Livieri, who founded the conservation nonprofit Prairie Wildlife Research in 2001.

“Plague is something that can wipe out all the prairie dogs and all the ferrets pretty easily,” he says.

Conata Basin is home to the world’s largest population of black-footed ferrets – the only ferret native to North America. Members of the mustelid family, along with stoats, weasels and martens, they are just over a foot long – about the size of a domestic ferret – and sport a creamy coat, dark legs, a black-tipped tail and a black bandit mask straight out of an old western. Their long, tube-shaped bodies are perfectly adapted for a life spent almost entirely underground in prairie dog burrows, which provide shelter and a source of food.

Livieri has witnessed first-hand the havoc brought by a plague outbreak. When conservationists first released a business of ferrets in Conata Basin in 1996, the disease had yet to reach South Dakota. With plenty of space and prairie dogs to feast on, the population shot up to more than 300 individuals. The ferrets flourished to such an extent that field biologists used the Conata Basin population to help boost ferret populations at other sites across the country.

Then, on 12 May 2008, US Forest Service employees working in Conata Basin noticed that a usually bustling prairie dog town was eerily quiet. It was the middle of the day, but there wasn’t a prairie dog to be seen. On closer inspection, they saw that the burrows had caved in and the entrances were covered in cobwebs.

“That’s usually how it happens,” Livieri says. “All of a sudden, one day, all the prairie dogs are gone.”

The Forest Service workers scoured the landscape for signs of life, but all they found was one dead prairie dog, which was sent to a Centers for Disease Control and Prevention lab. Within 24 hours the results came back: the prairie dog was plague positive.

Luckily, by 2008, the black-footed ferret programme had some tools at its disposal for dealing with a plague outbreak. Once Yersinia pestis hits a prairie dog colony, the best way to combat it is to coat the inside of every burrow with the insecticide deltamethrin, frequently called “Delta Dust”, which kills the fleas that carry the bacteria.

At maximum capacity, a team can spray about 40 hectares (100 acres) a day. But by the time they had noticed the plague had arrived, it had already affected 1,200 hectares.

“It’s like fighting a fire but you can only drive your truck so fast … and you’ve only got so much water,” Livieri says. “So we had to make a decision about what to save, and what to leave open to plague.” The plague is nearly 100% lethal to prairie dogs and black-footed ferrets, and it spreads fast. Conata Basin contains more than half a million burrows.

While others tackled the dusting effort, Livieri took on the task of vaccinating ferrets directly. When conservationists first realised that black-footed ferrets were highly susceptible to plague, they turned to a research epidemiologist with the US Geological Survey named Tonie Rocke. She found that a plague vaccine developed for humans worked on ferrets too.

“We used it exactly how it would be used in humans and it worked very well,” Rocke says. “You get the best results with a booster vaccination.”

The system Livieri used in the midst of the 2008 outbreak is the one he has repeated every year since, even when there is no obvious outbreak. Delta Dust wears off after about 10 months, and ferrets only live one to three years in the wild. The burrows must be redusted to keep infected fleas from creeping back in, and each new litter of kits must be freshly protected.

The costly and time-consuming task of keeping plague at bay is preferable to the daunting challenge of fighting an outbreak. A few years after Conata Basin’s fateful outbreak in 2008, its ferret population dwindled to just 50. It now hovers at around 100 – less than half of what it once was.

Unfortunately, killing fleas and vaccinating ferrets by hand are still the best tools at conservationists’ disposal for controlling the plague. But research into other prevention techniques continues, with innovations such as a peanut butter-flavoured oral vaccine for prairie dogs, or oats coated in an insecticide called Fibronil. A company called Revive and Restore is investigating the possibility of genetically altering black-footed ferrets to be plague resistant.

But getting rid of the plague entirely seems to be impossible. Research conducted by field biologist Dean Biggins with the US Geological Survey indicates that, once it arrives, the plague is there to stay. When Biggins experimentally sprayed prairie dog colonies with the flea-killing Delta Dust, prairie dog survival increased by up to 45%, even though there were no obvious signs of plague. In a follow-up study, Biggins and his colleagues compared the survival of vaccinated and unvaccinated ferrets on sites that didn’t have an obvious outbreak. The results were even more striking: vaccination increased ferret survival rates by 140%.

That was the clincher: that there was low-level plague that was very common
Dean Biggins

“That experiment was really revealing,” Biggins says. “That was the clincher: that there was low-level plague that was very common.” Biggins and his colleagues had tried hard to detect the plague directly. They tested thousands of fleas in the lab, and only a handful were positive for plague. When they tested prairie dogs, those came back negative too.

Interestingly for a disease that takes up so much space in the popular imagination, researchers still have a lot of questions about how plague moves through its environment. “It’s just very complicated,” Rocke says. “It’s a really, really complicated disease with lots of different vectors and different mammals that can be infected with different routes of transmission.”

The challenge of studying the disease in the wild is compounded by the fact that plague’s target species live most of their lives in burrows. “It’s not so easy to understand the dynamics of the disease when you can’t follow them underground,” Rocke says.

Until black-footed ferrets nearly went extinct, researchers primarily studied plague ecology with humans in mind. Now, there is intense interest in studying how the disease is disrupting North American ecosystems.

Left scrambling to ward off an invisible, virtually undetectable and highly lethal enemy, biologists like Livieri and Biggins consider the story of black-footed ferrets and plague to be a prime example of how dangerous a poor understanding of disease can be, and why we must invest in proactive research long before a species is circling the drain.

“When you think about black-footed ferrets, we got all the way down the drain,” Livieri says.

“People have this ideal in their head of how you restore endangered species. You bring the cage door up, and you let them go and you walk away. It’s not that easy to reverse all the impacts that humans have had on our environment.”