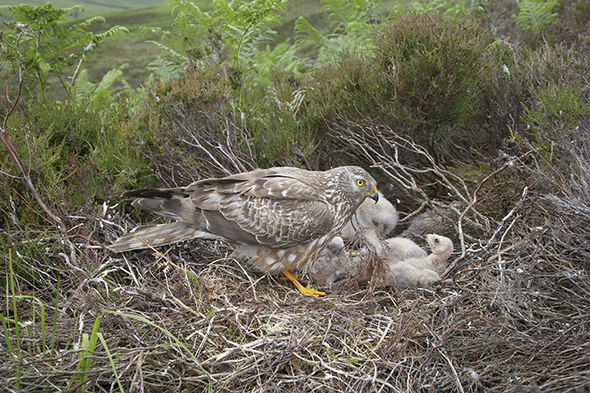 Detectives at Cumbria Police have opened a full criminal investigation into the fatal shooting of one of the bird of prey, called Rowan. Last year there were just six successful hen harrier nests resulting from 12 attempts in England.

But this year the RSPB says there are only three nests known to be currently in existence. Rowan’s body was found in Ravenstonedale, in the Lake District, on 22nd October and a post-mortem by the Zoological Society of London established he was shot.

Devastated conservationists said Rowan was satellite tagged at the Langholm Project as part of a joint venture between Natural England and the Hawk and Owl Trust. Only a handful of Hen Harriers exist now in the UK and they are passionately protected under the Wildlife and Countryside Act.

In August conservationists were caught up in a bitter row after abandoning support for a voluntary scheme designed protect the number of hen harriers in Britain.

The Royal Society for the Protection of Birds withdrew support for Department of the Environment, Food and Rural Affairs action plan aimed at saving the breed. They said nothing was being done to stop the deliberate shooting of the harriers on grouse moors, claiming they were being targeted to increase the numbers of game birds available for shoots.Martin Harper, conservation director of the RSPB, said: “We remain convinced the primary reason for the hen harrier’s continuing scarcity remains illegal killing. “People are still breaking the law and not enough is being done within the grouse shooting community to effect change. The hen harrier does not have time on its side.
“Hen harriers and other birds of prey in our uplands will not recover without a completely different approach.” The action plan, set up by DEFRA and agreed by the RSPB, landowners and shooting representatives, was designed to encourage the re-introduction of hen harriers.The introduction of the action plan in January 2016 followed the tragic disappearance – and suspected shooting – of five male harriers in 2015. In April a video emerged apparently showing an armed man using a decoy bird to attract a hen harrier in the Derbyshire Peak District.This led to the National Trust terminating a grouse shooting lease for the first time on its land.
The following month a man was caught setting illegal pole traps on the Mossdale estate, in North Yorkshire. He later lost his job. Mr Harper said: “This year, there have been a series of depressingly predictable incidents in England and Scotland, the disappearance of the hen harriers ‘Chance’ and ‘Highlander’, the use of pole traps and the hen harrier decoy in the Peak District.“As well as hen harriers, it has also been a really bad year for red kites with several suspicious deaths.” But landowners and shooting groups accuse the RSPB of ignoring other reasons for the hen harriers decline.
Peter Glenser of the British Association for Shooting and Conservation said: “The protection of hen harriers can only come through organisations working together. “It is easy to blame grouse moors and gamekeepers, rather than considering other impact factors, such as disturbance and climate.”The Countryside Alliance’s Liam Stokes blamed a small minority campaigners for the RSPB’s decision to pull out of the action plan. He said: “Aligning with these anti-shooting elements will strain the RSPB’s relationship with the working countryside.“When bird populations are in decline across the country it can ill afford to spend time, effort and money battling with shooting estates.”

This article was first published by The Sunday Express on 08 Nov 2016.