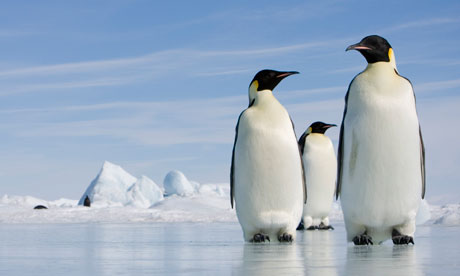 Emperor penguins are having to struggle up 100-foot walls of ice as warmer temperatures force them out of their traditional breeding grounds, a study has shown. The gravity-defying march of the penguins was spotted by British Antarctic Survey (BAS) scientists in satellite images of four colonies.

The birds normally breed on thin sea ice, close to easily accessible food sources. But ice forming later than usual in recent years has compelled them to move to much thicker floating ice shelves.

Experts believe the unusual behaviour could indicate that the penguins are adapting to environmental change.

Lead scientist Dr Peter Fretwell, from the BAS, said: “These charismatic birds tend to breed on the sea ice because it gives them relatively easy access to waters where they hunt for food.

“Satellite observations captured of one colony in 2008, 2009 and 2010 show that the concentration of annual sea ice was dense enough to sustain a colony. But this was not the case in 2011 and 2012, when the sea ice did not form until a month after the breeding season began. During those years the birds moved up on to the neighbouring floating ice shelf to raise their young.

“What’s particularly surprising is that climbing up the sides of a floating ice shelf – which at this site can be up to 30 metres high – is a very difficult manoeuvre for emperor penguins. Whilst they are very agile swimmers they have often been thought of as clumsy out of the water.”

The findings are reported in the online journal Public Library of Science ONE.

Because of their reliance on sea ice as a breeding platform, emperor penguins have been classified as “near threatened” in the IUCN’s “red list” of endangered species.

Dr Barbara Wienecke, from the Australian Antarctic Division, who also took part in the research, said: “These new findings are an important step forward in helping us understand what the future may hold for these animals, however, we cannot assume that this behaviour is widespread in other penguin populations.

“The ability of these four colonies to relocate to a different environment – from sea ice to ice shelf – in order to cope with local circumstances, was totally unexpected. We have yet to discover whether or not other species may also be adapting to changing environmental conditions.”

Whereas sea-ice is frozen salt water, ice shelves consist of glacial ice that has flowed from the land to the sea. Ice cliffs that form around the outer edge of a shelf can reach heights of almost 200ft.

The scientists focused on four northern Antarctic colony sites at Barrier Bay, the Jason Peninsula at the tip of the Larsen Ice Shelf, Ruppert Coast, and the Nickerson Ice Shelf.

Satellite images and radar data were analysed to track penguin movements and identify the terrain.