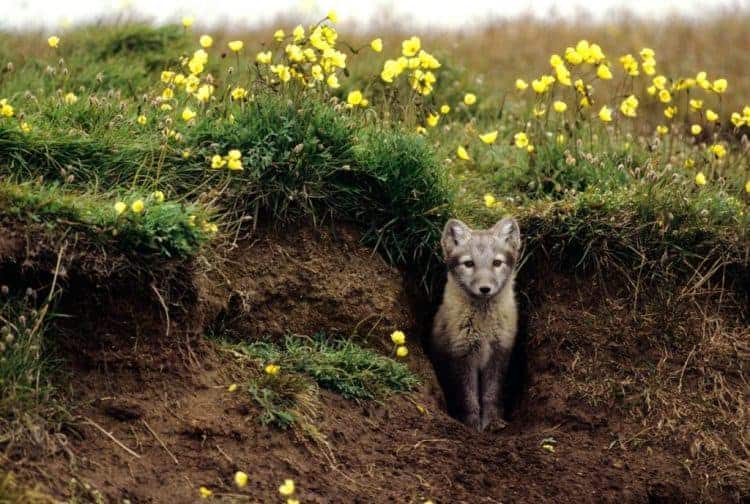 The underground homes, often a century old, are topped with gardens exploding with lush dune grass, diamond leaf willows, and yellow wildflowers – a flash of color in an otherwise gray landscape.

“They’re bright green and everything around them is just brown,” says Brian Person, a wildlife biologist for the North Slope Borough in Barrow, Alaska. “It pops.”

Person has spent the better part of a decade studying the wide-ranging carnivores’ movements throughout northern Alaska.

The 6-to-12-pound (3-to-5-kilogram) foxes, which prey mostly on lemmings and small game, are found throughout the circumpolar Arctic, from Alaska and Canada all the way into Europe and Greenland.

He’s tracked satellite-collared foxes that have traveled as far east as the Chukchi Sea (map) before doubling back and hopping sea ice until they’ve skirted the coast of neighboring Siberia.

But arctic foxes move too quickly to follow in real time, and Person only receives their GPS location every three days. That makes the colorful fox dwellings the key to better monitoring the population—and how they fit into the Arctic environment.

Peering down from a fixed-wing aircraft, the splashes of green “allow me to estimate just how many dens are out there,” he says.

“These animals are fertilizing and basically growing a garden.”

Gardens that create such a stark contrast on the tundra that scientists who recently published the first scientific study on the dens have dubbed the foxes “ecosystem engineers.”

Conducted in 2014 near Churchill, Manitoba, the experiments revealed that the foxes’ organic waste supports almost three times as much botanical biomass in summer months as the rest of the tundra.

How a Fox Garden Grows

During the long, dark Arctic winter, the tundra fades into an opaque world where sky and ground blend into a never-ending haze.

With temperatures that dip into the double-digit negatives, the only place for the foxes to take shelter and protect young from the elements—and other predators—is deep underground.

Some dens are over a century old, and the best are elevated: ridges, mounds, riverbanks. But with so much permafrost—frozen ground—and such a flat environment, prime sites can take years to develop.

With litters averaging about eight to 10 pups—some as high as 16—the foxes deposit high amounts of nutrients in and around their dens, a combination of urination, defecation, and leftover kills.

In winter, foxes don’t drink water or eat snow or ice, which lowers their core temperature. Instead they get water from their food, which concentrates nutrients in their urine, making it more potent.

These tundra oases are beyond just being postcard beautiful: They boost the Arctic environment.

And that means more food options in a place without many, says Jim Roth of the University of Manitoba, a co-author on the recent study.

“Lots of other species visit these dens,” adds Roth, who has been studying arctic foxes since 1994. “Caribou and other herbivores are attracted to the lush vegetation, and scavengers come looking for goose carcasses.”

Arctic fox gardens occur throughout the Arctic, says Person, who isn’t shy about his respect for the animal and its abilities.

In times of plenty, the canids can cache as many as 104 snow goose eggs a day, another unsung nutritional boost to the land – and opportunistic scavengers.

With short ears and snout—which requires less energy to heat—as well as a heavily insulated coat, the species is perfectly adapted to winter, Person says. So well, in fact, that scientists have been unable to get the animals to shiver in laboratory chambers – even when they drop temperatures to -40ºC.

“They’re incredibly efficient. I’ve seen them running and it’s almost like they’re not touching the ground.”

Polar bears may get more attention as the Arctic’s top predator, but an animal a fraction of their size might in fact be pound-for-pound the more impressive beast.

This article was first published by National Geographic on 20 May 2016.

Amazing and such intelligent animals to produce a garden using their own ferilizer, I imagine there is good edible plants for them. Must agree with Michele it is yet another excuse for humans to inflict another cruel human study that is really not needed and of no benefit to the foxes….they already have their environment sussed….

Such incredible little creatures. Not sure I like the concept of scientific studying and -40 temperartures to see if they can shiver or not. Surely surviving in such extreme weather locations, we know they can and do survive so why subject them to unnecessary so called scientific study? Seems really cruel and yet another human induced horror.