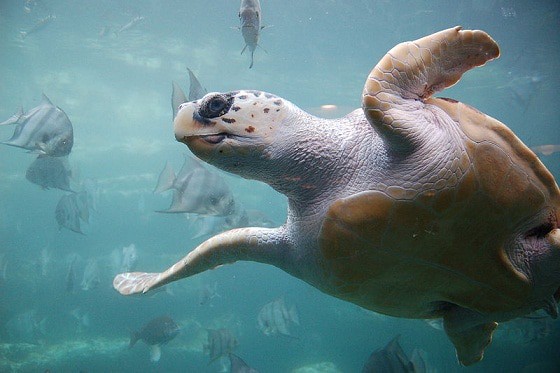 A recent lawsuit prompted the National Marine Fisheries Service (NMFS) on July 17 to propose 36 ocean areas as critical habitat for threatened loggerhead sea turtles along the Atlantic Coast and in the Gulf of Mexico. The lawsuit, jointly filed by Oceana, the Center for Biological Diversity and the Turtle Island Restoration Network, came five years after environmental groups petitioned the government to strengthen protections for loggerhead populations, and 35 years after loggerheads were first listed under the Endangered Species Act, at which time the government was required to designate critical habitat by law. This prolonged delay impelled environmental organizations to take legal action to ensure that the threats these sea turtles face are minimized.

Nesting beaches are being eroded by rising sea levels, polluted with trash, disrupted by beach nourishment projects, or replaced by hotels and high-rise apartments. In March, the U.S. Fish and Wildlife Service acknowledged these threats to loggerheads’ nesting grounds and set aside 739 square miles of beaches – 84 percent of all known nesting areas – along the Atlantic and Gulf coasts. However, sea turtles spend the majority of their lives in the water, where they need protected areas as well.

Loggerheads migrate thousands of miles through the water, facing giant shrimp trawls, plastic pollution, speeding yachts, and oil rigs and spills, which can all prevent them from returning safely to nest. NMFS has therefore designated 36 near-shore areas along the East Coast, stretching along the coasts of North Carolina, South Carolina, Georgia, Florida, Alabama and Mississippi. NMFS has taken this first step forward for protecting loggerhead sea turtle habitat, but it may not be enough.

In order to ensure that this habitat covers where turtles spend the majority of their time, the proposal must be expanded farther than one mile from shore and must include important floating seaweed mats where the sea turtles feed. The proposal fails to include habitat areas for loggerhead sea turtles in the Pacific Ocean, which are listed as endangered.

While determining and designating marine habitat areas can be challenging, it is critical to the recovery of the species. The settlement from the lawsuit has given NMFS a year to finalize their proposal, which we hope will be finalized in such a way as to give loggerhead populations a fighting chance.

This article was written by Amanda Keledjian for Oceana.org