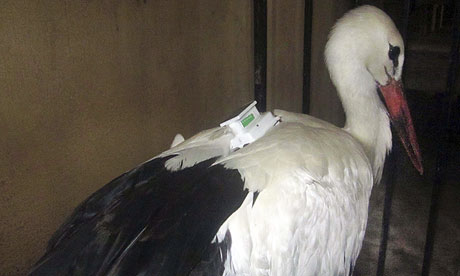 The stork that was detained by Egyptian police on suspicion of spying has been killed and eaten, days after its release. Police detained the stork after a man saw a tag on it and caught it, suspecting it was a spying device. The stork had been tagged by zoologists to track its migration.

According to Nature Conservation Egypt, the White Stork, which they named Menes, was released into a conservation area in southern Egypt but flew to an island in the Nile where it was caught and eaten.

The group said on a Facebook post: “Storks have been part of the Nubian diet for thousands of years, so the actual act of eating storks is not in itself a unique practice. However, the short-lived success story of getting Menes released was not enough to keep him safe till he exited Egypt.

“Egypt has long suffered from issues of uncontrolled hunting. However, it is important to always balance the needs of local communities with the needs of nature and biodiversity conversation. We truly are saddened by the tragic end to Menes’ journey, but once again, we would like to thank the park rangers of Aswan for their excellent initial efforts to get Menes the White Stork released safely into a protected area.”

The capture of the stork was seen as an example of popular xenophobia and paranoia which has been used as a political tool by the former president, Hosni Mubarak, the deposed president Mohamad Morsi and the current army-backed regime.

This article was written by Conal Urquhart for the Guardian.

Yes Doris ..we had informed about this the previous days too …what shocked me more is the fact that the nubian family killed and ate him ..and that it is a traditional meal for them …I couldn't believe it when i read it first …Unfortunately many birds with rings or trasmitters was captured as spies lately in a vaviety of countries …In Turkey a falcon caught as spy from Israel but as far as I know they freed it at last!!!! It needed more awareness about the migratory birds and enviromental organizations and birding groups must work to this direction… Read more »

Typical when people do not go further in education and find out new ideas.