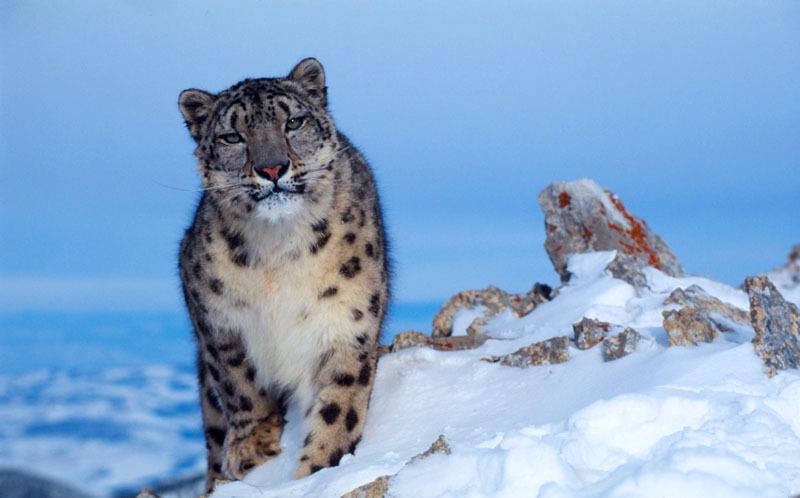 Representatives from Kyrgyzstan and 11 other Central and South Asian countries made a historic pledge today to protect and conserve snow leopards and their habitat in the high-mountain landscapes of Asia.

Joined by conservation experts from around the world and the international donor community, the 12 nations endorsed the Bishkek Declaration on Snow Leopard Conservation and the Global Snow Leopard and Ecosystem Protection Program. The declaration marks the first time that governments and non-governmental organizations have teamed up to conserve snow leopards and their habitat.

Research by WWF scientists shows that 30 percent of the endangered snow leopard’s habitat in the Himalayas may be lost if greenhouse gas emissions continue their steady increase. © © Klein & Hubert / WWF

Like many species, the snow leopard is vulnerable to poaching driven by the illegal wildlife trade. In addition, snow leopards are killed by farmers in retaliation for preying on livestock, and face a declining habitat range due to overgrazing, infrastructure development and the impacts of climate change.

It is estimated that fewer than 7,500 snow leopards remain in the wild. The goal of the initiative is to protect 20 snow leopard landscapes that have over 100 breeding adults by 2020, and to promote sustainable development in areas where the species lives.

The summit and work of the government of the Kyrgyzstan, the World Bank, range states and the other partners is bringing the plight of the snow leopard to the attention of the world. Saving snow leopards and managing the high-mountain landscapes of Asia also helps maintain water and food security for upland and downstream communities alike.

Moreover, the mountain landscapes of Asia are highly vulnerable to the impacts of climate change. Building adaptation measures for conservation, local communities and national economies into the plan will create for a more sustainable future.

“This is a monumental moment for snow leopards. It’s thrilling to see the brightest minds in the field of conservation team together to preserve this iconic cat, but also do it in a way that holds a positive impact beyond the snow leopard,” said WWF Program Manager John Farrington.

WWF works with partners to raise awareness at local, national and regional levels across the snow leopard range countries about the need to conserve the species. Together with the US Agency for International Development, WWF implements climate adaptation projects, for example by expanding protected areas, diversifying livelihoods, and works to improve management of pastures, water and forests.

This article was written for and published by World Wildlife Fund.

I hope the prey-animals are included in these good conservation measures because several of them are also teetering on that brink.

Beautiful creatures! Must be saved!

This is great news. I imagine that like many self-motivated individuals, the people bringing the most harm to these creatures can be given a financial incentive to stop, or a penalty so burdensome the thought of taking the risk is too appalling. I sincerely hope it works.