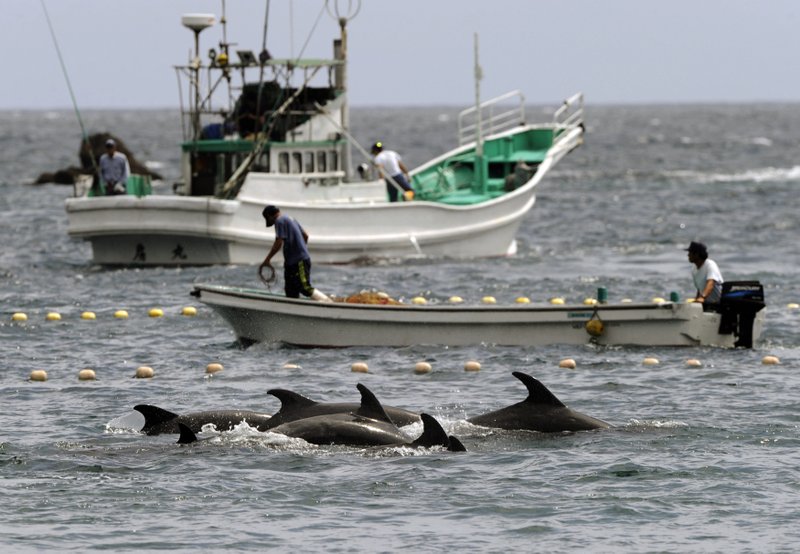 TAIJI, Japan – A line of eight boats came into view just below the horizon. A pod of about a dozen dolphins broke the glassy surface off Taiji, the center of Japan’s annual dolphin hunt, which continues despite international outrage.

Fishermen banged on semi-submerged poles to create an underwater wall of sound, driving the dolphins toward a narrow cove along the hilly, wooded Pacific shoreline about 80 miles southeast of Osaka.

As the pod entered, a net was drawn across the cove. The dolphins swam in narrower and narrower circles, a calf sticking close to its mother. Then came the sound of thrashing. A slaughter followed — hidden from view under a temporary tarpaulin roof. The waters of the cove turned pink with blood.

On this day in early September — the second of the hunt — 11 Risso’s dolphins were cut up for meat. The calf was released back into the ocean, facing likely death without its mother’s care.

Taiji’s dolphin hunt shot to global infamy in 2009 with the Oscar-winning documentary “The Cove.” But the dolphin meat trade is not the main money-spinner sustaining Taiji’s hunt.

Over the following two days, 13 bottlenose dolphins were captured alive — young, healthy animals selected from the pod by a team of Japanese aquarium trainers working alongside the fishermen.

The live dolphins are mostly sent to China, where the marine park industry is booming and largely outside the international rule making that has turned its back on Taiji’s catch.

China alone imported more than 200 live dolphins and whales from Japan in 2017 and 2018, trade data shows.

“Taiji is ground zero for the captive dolphin industry,” said Rachel Carbary from Ric O’Barry’s Dolphin Project, which is headed by the “Flipper” trainer-turned-activist. Carbary, who came to Taiji to live-stream the hunt, is founder of Empty the Tanks, a group campaigning to end all dolphin and whale captivity.

Under a quota system, Taiji’s fishermen are allowed to catch 1,749 dolphins or small whales from nine species during the six-month hunting season.

Dolphins from Taiji have supplied aquariums across the world for decades — in Japan, the United Arab Emirates, Mexico, Thailand, Russia and elsewhere. They have even been purchased by the U.S. Navy for mine detection and other tasks.

But public outcry led the World Association of Zoos and Aquariums (WAZA) to prohibit its members in 2015 from acquiring dolphins captured by drive hunts such as Taiji’s. Now, China has taken over as Taiji’s main economic lifeline.

In China, just one out of the more than 85 marine parks and related facilities belongs to WAZA.

Naomi Rose, a marine mammal scientist at the Washington-based Animal Welfare Institute, has used live events and online video streaming in China to raise awareness of the health problems and stress experienced by captive marine mammals.

Dolphins typically swim 25 miles a day in the wild and live in complex social groups, she says, so it’s hardly surprising they suffer in captivity.

Attitudes in China are changing slowly, she said, but the country hasn’t yet had its “Blackfish” moment, citing the influence of the 2013 American documentary about captive killer whales.

“The problem is there’s so many people in China that the potential customer base for these places is huge,” she said.

But the grisly depiction of the dolphin slaughter in “The Cove” brought global condemnation to this small, close-knit community.

Activists from Sea Shepherd Conservation Society marched through town in black T-shirts and carrying their modified skull-and-crossbones flag. Locals accused the activists of constantly goading them, thrusting video cameras in their faces and showing photos of dead whales and dolphins to schoolchildren.

Right-wing Japanese nationalists rallied to the cause and staged counterprotests in Taiji.

These days, the town is calm, but wary. Police trailed Carbary as she went about her filming, while a Japan Coast Guard ship sat offshore to guard the hunt.

“The people of Taiji have been engaged with whaling for more than 400 years; it’s part of our life,” said Yoshifumi Kai, a senior executive of the Taiji Fisheries Association.

“We don’t have any industries here, and the available land is limited. In this environment, we have no other way but to try to gain our living from the sea.”

But times may be changing — slowly.

Sea Shepherd activists no longer come here. That is partly because Japan’s immigration authorities have banned many of them from entering the country. This year, they were replaced with a group of more than 30 Japanese animal rights activists, who marched peacefully through Taiji on Sept. 1 chanting slogans and holding banners to protest killing and capturing dolphins.

On the way, they marched past Taiji’s Whale Museum. Inside, oblivious tourists from across Japan oohed and aahed as dolphins performed tricks for fish to cheesy rock music, and children lined up to stroke them.

Speaking after a recent performance, several families said they seldom or never eat whale or dolphin meat, but all defended Japan’s “food culture.”

“Eating this meat is part of our culture; it comes naturally,” said a 50-year-old man from the nearby city of Wakayama.

“Foreigners think animals are cute, but you still eat beef, pork and the like,” said the man, who said he preferred only to give his family name, Go. “Isn’t it the same?”

But Sangen says the town’s relationship with whales needs to adapt. “The image of Taiji is evil, but that’s not an image that we want,” he said.

Sangen has ambitious plans to turn Taiji into a major center of academic research on whales and dolphins. Instead of keeping dolphins in tiny pens, he wants to throw a net across nearby Moriura Bay. It would create a giant enclosure the size of about 40 soccer fields, where tourists could swim and kayak with dolphins and scientists could conduct research.

In 10 or 15 years, the net would be removed in the hope dolphins would keep coming back. Western marine biologists aren’t keen on the plan, seeing it as just another way to exploit captive dolphins.

But Jay Alabaster, who settled in Taiji to work on a doctorate on the dolphin hunt, said the town is beginning to catch up with changing global attitudes about how humans should interact with dolphins and whales.

“Taiji is moving toward a place that even the extreme activists will find more palatable,” he said. “The town just needs some time and space to get there.”

In the meantime, even Carbary said Taiji’s dolphin hunt needs to be put in a broader context.

“This is not a Taiji, Japan, issue; this is a global issue, because the captivity industry is a global industry,” she said. “People need to understand that if they’re planning a vacation down to Mexico and they want to swim with dolphins in captivity, they’re encouraging this behavior and this hunting season to continue.”

This article was first published by The Washington Post on 14 October 2019. Akiko Kashiwagi contributed to this report. Video by Simon Denyer. Video editing by Jason Aldag. Story editing by Brian Murphy. Photo editing by Olivier Laurent. Designed by Alla Dreyvitser.