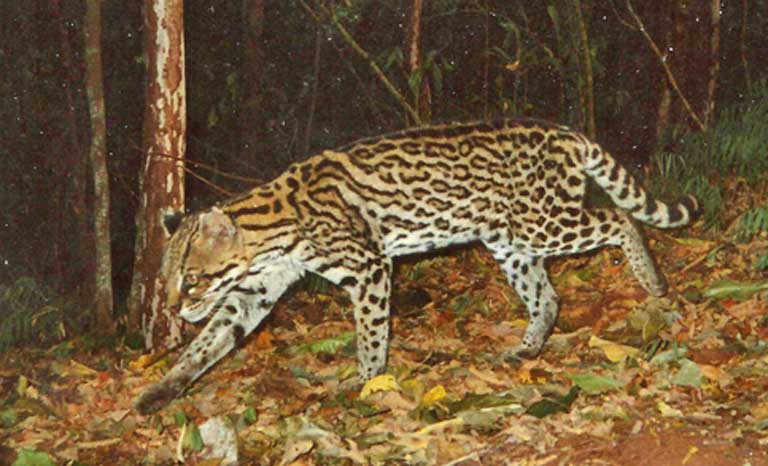 Each April for six consecutive years, Guilherme Braga Ferreira and three other researchers set out on a half-year journey, methodically installing remote camera traps across 386 square miles of the Brazilian Cerrado savanna.

Their goal: to photograph maned wolves, giant anteaters, pumas, tapirs and other Neotropical mammals, residents of the world’s most biodiverse grasslands. The data would show where these animals lived and reveal how well they survived when living near humans.

Ferreira and his team — ecologists from Instituto Biotrópicos, a Brazilian conservation nonprofit — deployed up to 70 cameras in carefully positioned arrays, concentrated at nine southeast Cerrado locations.

The researchers split their surveillance between fully protected state and national parks and lesser-protected “mixed-use” areas where people live, ranch and farm. Then they counted the number of mammals living in each and ran the data through a computer model.

In total, the researchers placed 517 camera traps in locations where mammals were most likely to be spotted — with each essentially becoming a selfie-station.

When an animal walked past, it broke the infrared beam on the device, tripped the shutter and snapped its own photo.

The researchers focused on 21 species that were big enough for the camera traps to record: those weighing at least 33 pounds, about the size of a small spaniel (The Cerrado boasts over 250 mammals in all, with more than a dozen of them endemic).

The cameras documented these larger animals for an average of 50 days each year from 2012 to 2017, with filming occurring during the April to October dry season. Taken together, the cameras logged 26,367 survey days.

The images provided the first-ever data on how animals are faring in strictly-protected parks versus Environmental Protection Areas (known as APAs) that by law, require that at least 20 percent of land area be left untouched, while the rest can be used in a variety of livelihoods. The field researchers worked with experts in conservation, ecology and environmental analysis to process the data, with results recently published in the journal Biological Conservation.

Their most important discovery: the top predators and the biggest, rarest mammals were notably absent from APAs: pumas (Puma concolor), tapirs (Tapirus terrestris), giant anteaters (Myrmecophaga tridactyla), maned wolves (Chrysocyon brachyurus) and both white-lipped and collared peccaries (Tayassu pecari and Pecari tajacu) went missing in the mixed-use areas. While APAs boast plenty of natural vegetation and relatively few people, “the probability of finding these large, threatened species in true reserves was five to 10 times higher,” says Ferreira, who was lead author on the study.

Just one vulnerable species, the hoary fox (Lycalopex vetulus), was more present in human-occupied areas. With the exception of the grey brocket deer (Mazama gouazoubira), all of the 12 species that lived in both parks and semi-developed areas were small animals. Some, including skunks and foxes, are opportunists that thrive among humans in many parts of the world. The smaller predators — foxes, ocelots (Leopardus pardalis) and jaguarundi (Herpailurus yagouaroundi) — did well in APAs for a different reason: they were able to take over niches previously held by larger competitors, the now-absent maned wolves and pumas.

Overall, large threatened species benefitted more from strict protection than smaller, non-threatened species, Ferreira said. State and national parks also held a much wider array of mammals, and many more of them.

Many wildlife species are in decline in the Cerrado — the world’s most diverse savanna, counted among the world’s 35 biodiversity hotspots. The biome is massive, covering a quarter of Brazil, stretching to the east and south of the Amazon. It boasts a stunning matrix of habitats, including grassland, palm-covered riverscapes, thorn scrub and lush, low, and seasonally dry forests. Its native vegetation — with more than 10,000 plant species — once covered two million square kilometers (772,204 square miles); that’s the size of England, France, Germany, Italy and Spain combined.

Today, most is privately owned.

Over the last 40 years, half of the Cerrado has been razed and converted to cattle ranches and large plantations growing soy, corn, cotton and other crops, mostly for export. A huge agribusiness push began in the 1980s in the region’s south, and steadily surged northward, encroaching on traditional communities and wildlands.

“First they’d log valuable trees, and then burn the rest to clear the land,” said Mercedes M.C. Bustamante, an expert on the region who teaches at the University of Brasilia. “It was cattle, then soy, sugarcane, and now it’s direct conversion to soybeans, which is more intense land use.” Soy growers use large amounts of pesticides, while irrigation on large plantations is draining aquifers in a dry landscape.

The boom in Cerrado agriculture made Brazil a leading producer and exporter of soy and cotton as well as beef, which is raised in pastures planted with alien grass species. From 1994 to 2002, a savanna area the size of Belgium lost its native vegetation, followed by even greater habitat destruction since then. Brazilian soy cultivation is set to expand by 12 million hectares (46,000 square miles) over the next 30 years — mostly in the Cerrado. The fear, Bustamante says, is that the savanna will become one big pasture and plantation.

Such large-scale development has made habitat loss the greatest threat facing Cerrado wildlife: what remains today is an increasingly disconnected patchwork. Fragmentation disproportionately threatens larger species, like those documented in the study, that need sizeable space to roam.

There are other threats too. Deforestation, for example, causes peccaries to disappear. Not one peccary was found on camera-trapped APA lands. These hairy, pig-like animals are also targeted by hunters and poachers for their meat, as are armadillos, agouti and other mammals.

“We know there is poaching,” Ferreira says. “We’ve bumped into poachers doing our field work, but because there’s no data, no one knows the extent of it.”

Predators rarely survive well near settlements, and the Cerrado is no exception. Ferreira notes that ranchers and farmers regularly shoot predators — including cougars and wolves — to prevent them from killing livestock.

The recent camera trap study was conducted in a less-developed part of the Cerrado, the Sertão Veredas-Peruaçu mosaic, which offers some protected areas spread across 18,000 square kilometers (7,000 square miles) in Minas Gerais state. The region is isolated, with few major roadways and low human density.

Mixed-use APAs allow for human settlement and some clearing, but require that at least 20% of their land maintain native vegetation, as is the case across much of Brazil’s Cerrado. The areas specifically documented in this study were about 60% wild, so there were likely more animals there than in other mixed-use areas with reduced wildlands. In contrast, private landowners in Brazil’s Legal Amazonia region are required to keep 80% of their properties in native vegetation. Property owners within APAs aren’t required by law to guarantee conservation of plants or animals.

While not all of the study area was pristine savanna, some of its habitat remains connected in a weave of 25 protected areas within the Sertão Veredas-Peraçu mosaic. In other parts of the Cerrado that have been taken over by massive soy and cotton plantations, “You can drive two to three hours without seeing a tree,” says Bustamante. Since these agribusiness intensive areas are fenced off, it’s nearly impossible for wildlife to cross through them, and connectivity is lost.

Seventeen percent of the planet’s terrestrial land was supposed to be conserved by 2020 under the Convention on Biological Diversity (CBD) — an international treaty ratified by 196 nations that governs conservation and sustainable use of biodiversity. While Brazil has essentially met that benchmark, most of the protected land is Amazon rainforest.

The rich savanna ecosystem is also listed as a priority region, but just 3% is under strict protection. Another 5% lies within mixed-use areas. Under the international agreement, the Cerrado is missing about 4.5 million hectares (17,000 square miles) of protected savanna land. But with so much of the region under private ownership, creating new protected areas will require political will, says Bustamante.

This is unlikely under Brazil’s current president, Jair Bolsonaro. His administration has slashed the country’s environmental agency budgets. Meanwhile, large ranches and agribusiness are lobbying to downgrade, downsize or completely deregulate protected areas.

Still, the new mammal research has strong national policy implications, says Marcus Rowcliffe, a conservation scientist at the Zoological Society of London and a study co-author. “It shores up the case for protected areas.”

Ferreira outlined the many arguments for protecting large mammals: Because they need substantial space to survive, he says, protecting them conserves the region’s entire web of life.

The loss of those species is already starting to shred the overall ecological fabric of the biome. Without agoutis and other species that disperse seeds, for example, the native vegetation mix is changing. Without maned wolves, rodents aren’t kept in check. The decline in peccaries, who dig and turn over the soil, results in the loss of nature’s resident composters.

These changes have significance beyond biodiversity. The savanna stores a great deal of carbon, Ferreira points out. He calls it “the forest upside down” because old, deep roots are at least three times as large as the shrubs and trees above ground. Those roots sequester large amounts of carbon while also helping replenish and hold groundwater. The Cerrado is known as “the birthplace of waters”: its rivers and aquifers provide clean, freshwater for much of the nation.

Both true parks and mixed-use APAs are helping protect what’s left by curbing illegal deforestation and experiencing some degree of fire management. However, greater attention will be needed in the future to guard against the growing number of fires: The Cerrado is historically a fire-prone biome, but climate change has amped up the frequency and intensity of drought. Annual blazes release large loads of carbon and leave behind impoverished ecosystems.

Saving the Cerrado’s mammals and other wildlife will require a basket of tools, says Ferreira, including population monitoring and oversight of genetic health. Conservation strategies include the creation of more fully-protected parks, especially in the forested north that is rapidly being leveled for soy plantations in an agribusiness-dominated region known as MATOPIBA, an abbreviation of the Brazilian states of Maranhão, Tocantins, Piauí and Bahia. Conservation also needs to happen outside pristine areas, she says, with scientists and agricultural producers collaborating to design more effective mixed-use areas that connect natural areas and better protect animals.

Bustamante underlined the urgency: “We can’t wait 10 to 20 years. If we continue as we are, we will have just small, wild islands and large monoculture. The Cerrado will be gone.”

Videos in order of appearance in this story: giant anteater, tapir, maned wolf, and coati, all courtesy of Guilherme Ferreira/Instituto Biotrópicos.

Researchers on the six-month-long, annual Cerrado wildlife surveys met with many physical hardships, not the least of which were swarms of insects. Image by Marcell Pinheiro.

Tapirs and other large Neotropical mammals appear in their largest numbers in fully protected areas of the Cerrado. As a result, say researchers, additional well protected areas will be needed to preserve biodiversity. Image courtesy of Guilherme Ferreira/Instituto Biotrópicos.