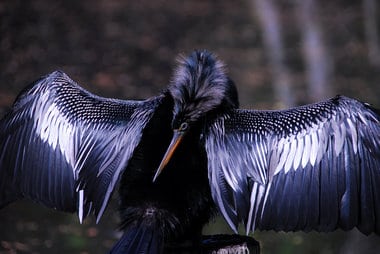 An Atmore man has pleaded guilty in federal court to killing migratory birds and selling the feathers on the black market.

Alexander Alvarez faces the possibility of seven and a half years in prison and fines totaling more than $500,000, according to a release from the U.S. Fish & Wildlife Service. He is scheduled to be sentenced in May for violations of the Lacey Act and the Migratory Bird Treaty Act.

Attempts to contact Alvarez or his attorney, Donald Friedlander of Mobile, were unsuccessful.

Court records show that Alvarez was caught as he tried to sell more than a dozen sets of anhinga tail feathers to an unidentified man in Louisiana.

Tail feather sets are often used to make fans and other Native American curios that sell for hundreds of dollars. Hawk, eagle, and anhinga feathers are commonly used, and are routinely confiscated in similar cases involving illegally killed birds, according to court records.

The anhinga is a fish-eating bird common in the Mobile-Tensaw Delta and other coastal swamps. They resemble cormorants, but can be easily distinguished by their unique swimming habits.

Unlike cormorants, which float on the water’s surface when swimming, the entire body of an anhinga remains underwater, with just the long, curving neck and head visible above the surface. The resemblance to a snake poised to strike earns the anhinga the common name “snake bird.”

The wing feathers feature an intricate fringe of white edging. But it is the anhinga’s amber-tipped tail feathers — so large that the birds are sometimes called water turkeys — that command a high price on the black market.

A search warrant executed at Alvarez’s home in 2009 revealed that anhingas were not the only birds he had killed illegally. Court documents show that Alvarez was in possession of a laundry list of protected birds, and he admitted he had been killing birds illegally since 2006.

Authorities seized feathers from nine anhingas, four red-shouldered hawks, two Cooper’s hawks, two pileated woodpeckers, one red-tailed hawk, on rough-legged hawk, one broad-winged hawk, one golden eagle, one osprey, one sharp-shinned hawk, one Mississippi kite, one peregrine falcon, one American kestrel, and another bird that was identified as either a Gila woodpecker or red-bellied woodpecker.

The court record showed emails revealed the transactions that brought Alvarez to the attention of federal law enforcement and officers from the Navajo Nation Department of Fish and Wildlife. Those sales involved multiple sets of anhinga tail feathers, which Alvarez priced between $300 and $500 per 12-feather set. Five sets of tail feathers from “immature” birds were offered at a discount price.

Alvarez told authorities that he met the Louisiana man — who helped him sell the feathers — at a Native American pow wow and believed the man to be a member of the Navajo tribe. Under certain circumstances, Native Americans are allowed to possess the feathers of protected birds.

It is unclear if the Louisiana man was prosecuted. The U.S. Attorney’s Office did not return calls seeking comment.

Federal officials said that Alvarez is not an enrolled member of any federally recognized tribe. No age was listed in the court record.

“Mr. Alvarez sought to profit from selling protected bird feathers he had no legal right to possess,” read a statement from Ignacia S. Moreno, assistant attorney general for the Environment and Natural Resources Division of the Department of Justice. “Federal law prohibits the sale of migratory birds, feathers or their parts for commercial gain.”

This article was written by By Ben Raines, Press-Register and published by AL.com