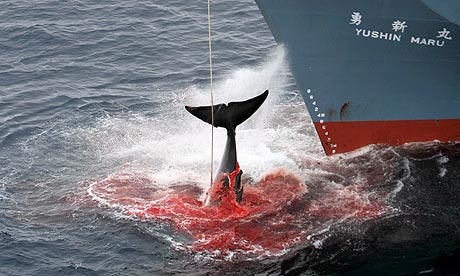 Japan is using scientific research as an excuse to conduct commercial whaling in defiance of an international ban, Australia said on Wednesday at the start of a landmark legal bid to put a permanent end to the annual slaughter of almost 1,000 whales in the Southern Ocean.

Australia, with the support of New Zealand, has asked the International Court of Justice to withdraw all permits for future whale hunts from the Japanese fleet.

The hearings in the Hague will last three weeks and a decision is expected before the end of the year, possibly in time to halt Japan’s next whaling expedition. The decision by the top UN court will be final, as there is no appeals process. Japan is expected to challenge the court’s jurisdiction to hear the case, but details of that challenge have yet to be disclosed.

“Japan seeks to cloak its ongoing commercial whaling in the lab coat of science,” Australia’s agent to the court, Bill Campbell, told the 16-judge panel.

Opponents of Japan’s Antarctic whale hunts say research into the animals’ migratory, reproductive and other habits can be conducted without killing them.

Japan, however, claims that lethal research is necessary to acquire the data needed to re-examine the International Whaling Commission’s ban and possibly return to sustainable commercial whaling.

It uses a provision in the IWC’s 1986 ban on commercial whaling to kill more than 900 minke whales every winter, although recent hauls have been far smaller following clashes with the marine conservation group Sea Shepherd.

Meat from the Antarctic hunts is sold legally in Japanese shops and restaurants – a practice that campaigners say proves the research hunts are a cover for commercial whaling.

Australia’s solicitor-general, Justin Gleeson, told the judges: “No other nation, before or since, has found the need to engage in lethal scientific research on anything like this scale.”

Japan, which will launch its defence next week, insists that it is abiding by the terms of the 1946 International Convention for the Regulation of Whaling.

“Japan’s research programs have been legally conducted for the purposes of scientific research, in accordance with the [convention],” Japan’s deputy minister for foreign affairs, Koji Tsuruoka, said outside the courtroom. “Australia’s claim is invalid. Japan’s research whaling has been conducted for scientific research in accordance with international law.”

Campbell said that if all signatories to the convention killed as many minke whales as Japan does, then more than 83,000 would be slaughtered in the Southern Ocean every year. That would be “catastrophic” for whale populations, he told the court.

Campaigners applauded Australia’s unprecedented legal action, which has been more than three years in the making.

“Whaling under the guise of the scientific exemption to the moratorium is an abuse of rights and a breach of conservation obligations as Japan is a member of the International Whaling Commission.”

Wendy Elliot, of WWF International’s species programme, said: “WWF is fully opposed to so-called scientific whaling in the Southern Ocean, one of the most important areas for whales on this planet, and the site of previous relentless and devastating slaughters, from which most Southern Ocean whales are still far from recovered.”

“WWF commends the Australian government for taking this case to the international court of justice, and hopes that it heralds the end of whaling in the Southern Ocean.”

Australian officials say Japan has killed more than 10,000 whales since the IWC ban went into effect.

This article was written byJustin McCurry in Tokyo for the Guardian UK.