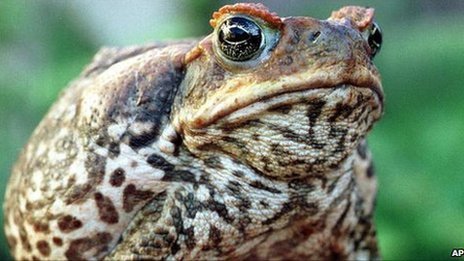 Thousands of volunteers in Australia are taking part in a massive cull of cane toads. The animals – regarded as poisonous pests – were introduced to Australia 75 years ago to get rid of beetles.

It is now thought their numbers have swelled to 200m, and there are signs they may have started spreading from Queensland down into New South Wales. Our correspondent says most people in Australia regard the creatures as nothing other than a growing nuisance.

Queensland politician Shane Knuth told the BBC that the cull is justified. “They’re one of the most destructive creatures and the most disgusting creatures and one thing they’re doing is they’re killing our native wildlife and they’re taking over our habitat,” he said.

The toads were introduced into Queensland in the 1930s to kill beetles but the experiment failed, and their numbers have grown because there are almost no natural predators which can kill them off. Some experts believe climate change may help account for their unstoppable migration south.

Scientific attempts to exterminate them have all but failed, leaving it to volunteers to try to dent their relentless takeover of the australian countryside, our correspondent says.

This article was written and published by BBC News Asia