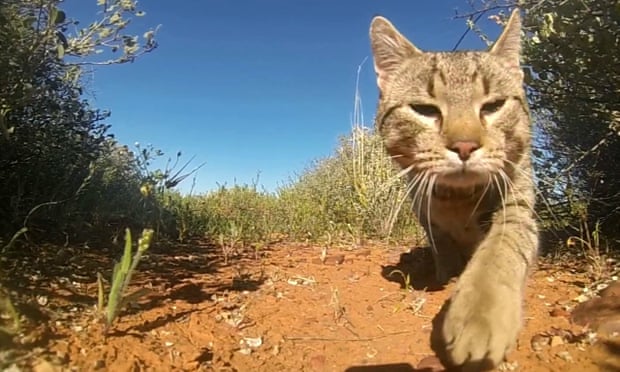 Australia’s wildlife are at least 20 times more likely to come across a deadly feral cat than one of the country’s native predators, according to a new study.

Invasive cats, which kill billions of native animals each year, form a triple threat, the study finds, by hunting with greater intensity, in broader environments and in greater numbers than an equivalent native marsupial predator – the spotted-tailed quoll.

“They eat everything and they’re in every environment,” says study author Dr Rowena Hamer. “They’re impressive, but devastating.”

Feral cats have a devastating toll on Australia’s wildlife, killing an estimated 2bn animals every year and being implicated in at least 25 mammal extinctions and pressuring a further 124 threatened species.

Hamer and colleagues attached GPS collars to 25 feral cats and 10 quolls in four locations in the middle of Tasmania and then tracked their movements.

Quolls are similar in size to cats and have similar diets, hunting for small mammals, birds, reptiles and frogs.

“This was about understanding why cats are so devastating, because Australia seems to have similar native predators,” said Hamer, who did the research while at the University of Tasmania, and is now a conservation ecologist at the not-for-profit Tasmanian Land Conservancy.

Hamer’s results, published Wednesday in the journal Proceedings of the Royal Society B: Biological Sciences, reveal quolls are more selective and less voracious hunters than cats.

Using data on the numbers of cats and quolls, the habitats they prefer, and how often they go back to the same area, the study finds native wildlife are at least 20 times as likely to encounter a cat than a quoll.

Hamer said the data showed the location of the cats and quolls every five minutes over about a month for each animal, and showed some quolls travelling 12km over a few days. Across fields, the data showed how quolls sprint across open areas in a straight line.

Cats have only been in the Australian environment since the late 18th century and generally native species have not found ways to avoid being killed when they come across one.

The study also found there were about nine cats for every square kilometre in the area studied, but there were only 0.4 quolls.

Whether in pasture, grassland, woodland or creek banks, wildlife is now more likely to come across the invasive cat than the native quoll.

The Australian National University’s Prof Sarah Legge, who has researched the toll of cats on native species, said the study revealed useful and complex information on why cats were such a “superb generalist predator that native mammals struggle to evade”.

Legge, who was not involved in the study, said: “We know they are targeting small- to medium-sized mammals and this study helps us understand why it’s happening and gives us some clues as to what to do about it.”

One approach suggested by the study is to maintain and restore complex understorey in habitats to give native animals places to hide from cats.

Feral cats were declared a pest species in 2015. Feral cats threaten some 124 nationally listed species, according to the government.

The Australia government is developing a new threatened species strategy which is expected to be released later this year.

The previous five-year strategy, which closed in mid-2020, included targets for cat management and culling. Some 844,000 cats were culled between July 2015 and June 2018, an interim review said.

This article was first published by The Guardian on 6 January 2021. Lead Image: Feral cats have being implicated in at least 25 mammal extinctions in Australia. They kill about 2bn animals a year, while domestic cats kill about 230m Australian birds, reptiles and mammals each year. Photograph: Hugh Mcgregor/PR IMAGE.