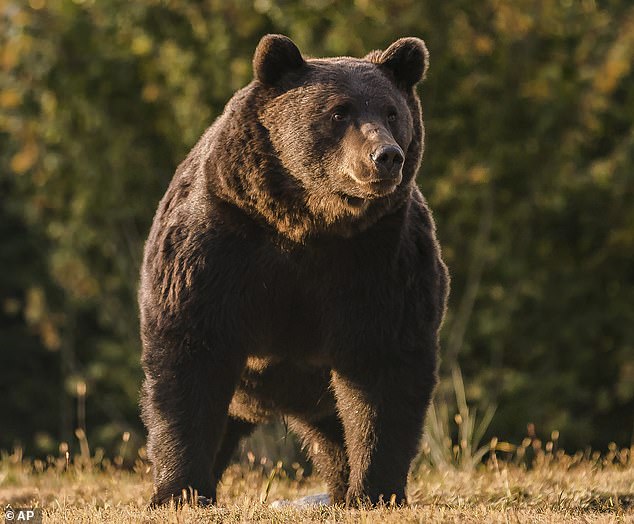 An Austrian prince will be investigated over allegations he illegally shot and killed what is believed to be Romania’s largest brown bear during a trophy hunt in the country’s Carpathian Mountains in March, Romanian authorities said Wednesday.

Prince Emanuel von und zu Liechtenstein was granted a four-day hunting permit in March in Romania’s Covasna County and on March 13 he ‘harvested’ a 17-year-old male bear, for which he allegedly paid the princely sum of 7,000 euros (£6,042), according to official hunting documents seen by The Associated Press.

The prince, who is a resident of Riegersburg in Austria and from the Liechtenstein’s royal family, is reported to have ‘wrongly’ killed the massive male bear during the trophy hunt.

He had been given special approval by the Romanian environment ministry to shoot a female brown bear – but instead he killed the male bear known as ‘Arthur’, environmental groups claim.

Romania’s National Environment Guard (NEG) launched a probe on April 29 into the death of a bear from a protected species in central Romania after noticing documents were missing, NEG senior official Octavian Berceanu said. He added that poaching is one of the suspicions in the case.

‘We knew that a female bear was supposed to be extracted, but we afterwards found a (dead) male bear,’ Berceanu said.

Environment Minister Tanczos Barna, who oversees the NEG, said a hunting permit had been issued to shoot a female bear in Covasna because she was a nuisance to residents, but did not say to whom the permit was issued.

‘All of the papers from National Environmental Guard will go to the police,’ Berceanu said, referring to a branch of the ministry.

Berceanu also said that some official papers that are required after a bear kill are missing.

‘The local environment agency should inform the Environmental Guard after the shooting, but this didn’t happen,’ Berceanu said.

Agent Green, an environmental nongovernmental organization that monitored the large male bear they called ‘Arthur’ for nine years, says that it lived ‘deep in the wild’ and had no contact with human settlements.

‘Arthur was 17 years old and was the largest brown bear seen in Romania and probably in the European Union,’ Agent Green president Gabriel Paun said in a statement.

The sheet confirming the bear’s measurements, published by Agent Green and Austrian branch of Association Against Animal Factories (VGT), named ‘Emanuel von und zu Liechtenstein’ – a Liechtenstein royal who lives in Austria – as the hunter.

‘NGOs Agent Green and VGT are condemning the killing of the brown bear Arthur by the trophy hunter Prince Emanuel von und zu Liechtenstein who came to Romania in March to shoot him,’ they said.

Repeated attempts to contact the prince’s estate were unsuccessful. Switzerland’s Blick newspaper quoted the prince as saying he wouldn’t comment on the matter.

Romania officially banned trophy hunting in 2016, but hunting permits for ‘problematic’ bears – ones that damage things such as farm crops or domestic animals – can be issued to hunting associations but only as a last resort, after relocation measures fail. These permits are then sold to trophy hunters.

But Agent Green claims that the environment authorities issued the hunting permit based on a complaint about a ‘problematic’ cub-rearing female bear that had caused damage in the village of Ojdula in Transylvania last summer.

‘It was always about shooting the biggest bear and not about solving the problem of the community,’ Gabriel Paun, president of Agent Green, told the AP.

‘I wonder how the prince mistook the biggest male living deep in the wild against the much smaller female next to the village.’

Due to Arthur the brown bear’s large size, it was considered in hunting parlance a ‘Golden’ trophy, prized specimens which can fetch upward of 20,000 euros (nearly £17,259).

‘Every farmer I spoke to in the village of Ojdula said that nothing had changed since the male bear was shot and that the female bear continues to come daily to the households. This is poaching as the prince shot the wrong bear – it was murder,’ Paun said.

Environment Minister Barna Tanczos told local media on Wednesday that determining whether the correct bear was killed was ‘extremely complicated.’

A petition launched yesterday by Agent Green calling for a total trophy hunting ban in Romania has garnered more than 13,000 signatures.

For brown bear expert Csaba Domokos of the nature conservation NGO Milvus Group, the killing of Arthur ‘is nothing exceptional.’ He also said that for many hunters, killing a female with cubs would go against hunting ‘ethics.’

‘The hunting associations use damages as a pretext to shoot the trophy bears. The exceptions are the cases when they use it to shoot a problematic bear,’ Domokos told The Associated Press.

‘They just get someone from a village to give some evidence that there was a bear causing problems . then a (hunting permit) is given out and they just go and shoot a big bear because they get more money than shooting a smaller one,’ he said.

Romania is home to Europe’s biggest population of brown bears, officially around 6,000. But some scientists dispute these figures claiming that the methodology behind the count was inadequate.

The killing of the large carnivore took place in a protected Natura 2000 Site, areas of special natural interest and home to some of Europe’s most valuable and threatened species, protected under EU law.

‘The current law is poor, there are too many gray areas and it’s facilitating trophy hunters to come to Romania,’ Paun said.

‘At the moment anyone can make a fake complaint about a bear and send it to a hunting association who will do all the necessary work to obtain a hunting permit – then a hunter comes and shoots any bear they wish.’

This article was first published by The Mail Online on 5 May 2021. Lead Image: Prince Emanuel von und zu Liechtenstein had been given special approval by the Romanian environment ministry to shoot a female brown bear – but instead he killed the male bear known as ‘Arthur’ (pictured in October 2019), environmental groups claim.