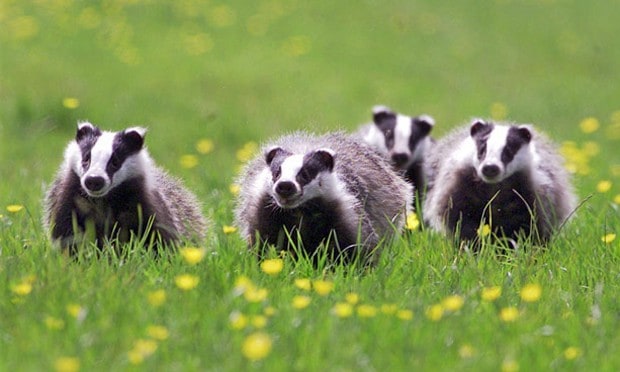 Only a small proportion of badger shootings in the pilot cull will be monitored to make sure it is humane. The government was accused of not properly assessing the animals’ suffering after a freedom of information (FoI) request revealed that as few as 120 shootings will be independently observed, out of about 5,000 badgers set to be culled.

The Department for Environment, Food and Rural Affairs (Defra) was also criticised for failing to disclose full information about how it would test whether the cull is humane, following a separate FoI inquiry, in which it withheld details about examining dead badgers.

The Information Commissioner’s Office ruled that Defra should not withhold the information and ordered the government to disclose methods for assessing the carcasses to the Humane Society International UK.

Following the ruling, the animal welfare group accused the government of avoiding making public information about assessing the suffering of badgers in the pilot culls, which are intended to test whether the process can take place effectively and humanely.

Ministers and farmers say a cull of the protected animal, which spreads bovine TB to cattle, is necessary to stop spiralling rates of the disease in livestock, but opponents say it will have little effect on infection and will cause suffering to badgers. Figures provided by Defra – in response to a query by animal welfare group Care for the Wild – about the percentage of badger kills which would be monitored revealed minimum figures of 60 shootings by rifles and 60 by shotguns.

Care for the Wild also claimed that only two independent monitors would be on the ground in the cull zones to check whether shooting was being done humanely, and that Defra was planning to follow up with phone calls to marksmen to assess the pilots.

Philip Mansbridge, chief executive of Care for the Wild, said: “Any pretence that this cull will be carried out in a humane way has been shot out of the water.”

And he criticised prime minister David Cameron’s suggestion that not going ahead with the cull would be disastrous for badgers as well as farmers and cattle as a “blatant” and “inaccurate” attempt to win public support for culling.

“The truth is this cull has no scientific or moral basis,” said Mansbridge. “Going ahead with it will give false hope to farmers, is pointless for cattle and utterly disastrous for badgers.”

As part of the assessment to see if the cull is humane, 240 carcasses will be collected for post-mortem examination, but the Humane Society International UK said questions on details of the process had not been answered.

Defra wrongly refused to say how carcasses would be selected for post mortem examination, what measures would be used to determine the animals suffered and how they would factor in wounded badgers which retreated underground to die, the group said. After its complaint was upheld, the group’s chief executive, Mark Jones, said: “Defra has been stalling for many months, clearly trying to avoid making public this information about how the suffering of shot badgers will be assessed.

“We are delighted that the Information Commissioner has instructed Defra to reveal the information, information that should have been released many months ago so that the proposed methods and criteria could have been examined by independent experts before a single badger is shot.”

He encouraged ministers to postpone the cull to allow time for its methods to be scrutinised by independent experts.

A Defra spokesperson said: “The safety and humaneness of the badger cull pilots are our absolute priorities. Experts will observe and monitor the cull in the field and post mortems will be carried out for further checks. We have listened to advice from an independent expert panel on humaneness to ensure that the monitoring system in place is robust.”

This article was sourced from the Press Association and published by the Guardian UK.