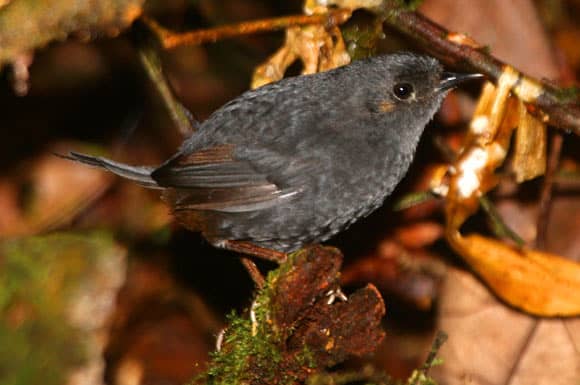 An international team of ornithologists led by Dr Marcos Bornschein of the Mater Natura-Instituto de Estudos Ambientais in Curitiba has described an endangered new species of bird from the montane Atlantic Forest of southern Bahia, Brazil.

The new species belongs to Scytalopus, a genus of small passerine birds in the family Rhinocryptidae. Its isolated populations have been known from the mountains of the Bahia state since the 1990s, but have been mistakenly attributed to an already known species of Scytalopus, the Mouse-colored Tapaculo (S. speluncae).

Based on morphological and bioacoustic analyses of eleven specimens and several tape recordings, Dr Bornschein and his colleagues concluded that these populations actually represent a new species. The team chose the scientific name, Scytalopus gonzagai, in honor of Brazilian ornithologist Dr Luiz Antonio Pedreira Gonzaga, who discovered and named two new bird species in southern Bahia during the 1990s.

The recommended common name is the Bahian Mouse-colored Tapaculo. The bird measures an average of 12 cm in length and weighs an average of 15 g. It has gray body plumage. The claws are yellowish with light brownish base.

It is a difficult-to-see creature living mostly among the dark, dense plant cover of humid places. It hops on the ground and over rocks, fallen logs, and low, tangled branches up to 2 m above ground.

“We detected lone males or pairs. We found females only accompanying territorial males. Females also give the species’ song,” the scientists wrote in a paper that will be published in the October 2014 issue of The Auk, the official publication of the American Ornithologists’ Union.

The Bahian Mouse-colored Tapaculo has three types of vocalizations: the song, the alarm call, and what the team termed the ‘kreew’ call, which is probably a contact call.

The bird is currently known from three municipalities – Boa Nova, Iguai, and Arataca – and five localities distributed in two distinct montane massifs of the southeastern sector of Bahia.

The ornithologists estimated an area of occupancy of the new species of 5,885 ha and a density of 0.49 individuals per ha, resulting in a total population of only 2,883 birds.

“Under IUCN criteria, this new species should be classified as Endangered,” they concluded.

This article was first published by Sci-News.com on 22 Sep 2014.