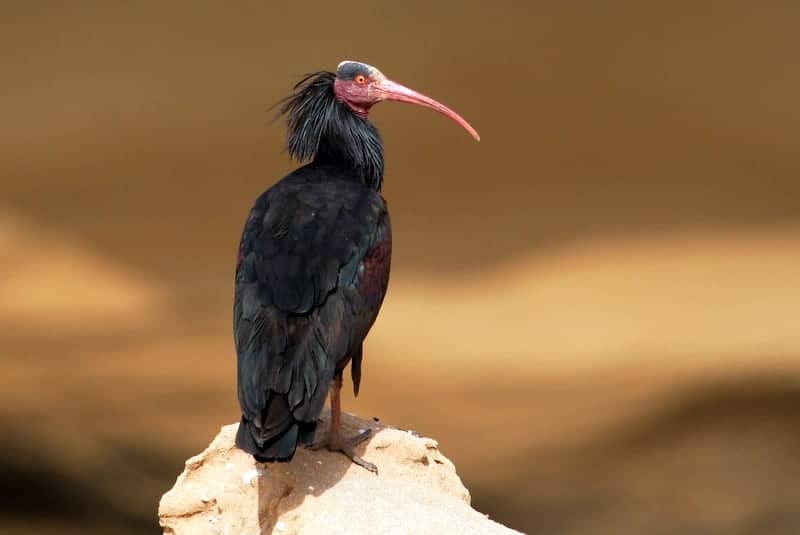 The world’s 28 Ibis species form the bulk of the family Threskiornithidae (Ibises and Spoonbills), and comprise an interesting group of long-legged, long-beaked, wetland, grassland and forest species. Some are on the brink of extinction (for example Crested, Sao Tome and Giant Ibis), yet others have taken to the modified human world and adapted to become common urban and suburban birds (examples include Hadada, African Sacred and Australian White Ibis.)

I would like to focus on the two fascinating and rather unusual species that make up the genus Geronticus. This generic name is derived from the Greek word for “old man” due to their bald heads which is also reflected in their English names; Northern and Southern Bald Ibis.

The Northern Bald Ibis is classed as Critically Endangered, the highest risk category assigned by the IUCN Red List for a wild species and indicating that the species’ numbers have declined, or will decrease, by 80% within three generations. This is despite the fact that the Northern Bald Ibis was one of the earliest officially protected species, thanks to a decree by Archbishop Leonhard of Salzburg in 1504. This strange but beautifully plumaged bird was widely known throughout Europe as the Waldrapp (meaning “Forest Crow”). It bred in large colonies on cliffs and castle ramparts throughout southern and central Europe, before it began a relentless march towards extinction. By 300 years ago it had disappeared from the whole of Europe and this pattern followed in the Middle East, where finally it was only known from a single breeding population at Birecik in Turkey. This colony outlived dozens of others as it was protected by the local religious beliefs that the ibises migrated each year to guide Hajj pilgrims to Mecca. Around 3,000 birds summered and bred at Birecik in the 1930’s but this declined to only 400 by 1982. By 1986, only 5 wild pairs remained and this dwindled to one bird by 1990 that died the following year. The Northern Bald Ibis also occurred in North Africa and many colonies survived in Morocco and Algeria, but this tragic pattern continued with the last colony in Algeria vanishing in the 1980’s. In Morocco 38 colonies remained in 1940, 15 in 1975, in 1989 the last migratory population in the Atlas Mountains died out, and all that remained into the 1990’s were 4 breeding colonies at two locations on the coast of Morocco that totaled 56 breeding pairs. The Waldrapp’s numbers continued declining despite intensive conservation efforts. 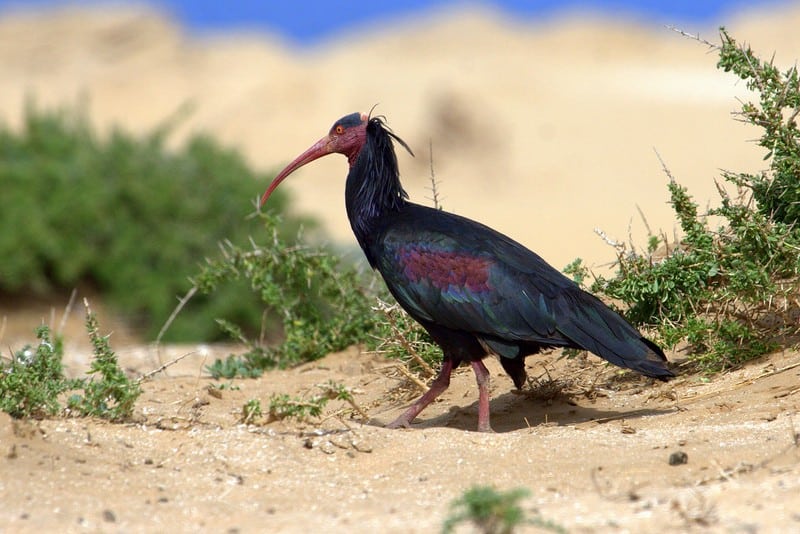 Extinction, driven by loss of feeding habitat, nest disturbance, hunting and poisoning, seemed inevitable. However, this fragile and tragic situation has now improved due to intensive conservation measures. There has been growth in the breeding population at the colonies in Morocco (now estimated at 106 breeding pairs and approximately 500 birds in total). Then, in 2002, the news of a dramatic discovery of a relict colony in Palmyra, Syria, a country where they had been declared extinct for 70 years, was greeted with jubilation. Sadly, this tiny Middle Eastern remnant has declined from 7 birds at discovery to just 3 birds that returned to their nesting colony last month. These birds are tagged and migrate to the Sululta Plains on the Ethiopian highlands were they spend their winter. Interestingly, another two younger birds also wintered this season in the area, but the origin of these two vital birds is still a mystery that needs to be unraveled.

A semi-captive population of approximately 100 birds still exists at Birecik in Turkey (they are given freedom during the 5 month breeding season and then held in captivity during the migration/wintering season). Small semi-captive populations have also been reintroduced in Spain and Austria and a reintroduction program from the Birecik population has been started in Syria. The only readily accessible area to see wild populations of this remarkable bird is coastal Morocco, near the city of Agadir. 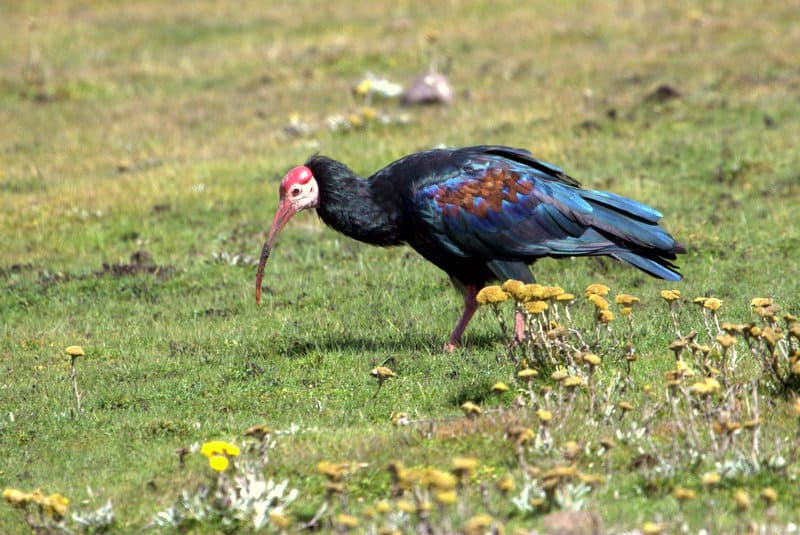 Further south in Africa, the status of the Southern Bald Ibis is also not rosy (it’s classified by the IUCN Red List as Vulnerable), but fortunately it isn’t as critical as its northern cousin. This species is a South African near-endemic, sharing its range only with the tiny kingdoms of Lesotho and Swaziland. It also used to occur much more widely throughout South Africa, breeding even on famous Table Mountain that towers over Cape Town. However, as with the familiar story of its northern cousin, over the decades its range contracted dramatically and is now centered around the Drakensberg Mountains and outlying rocky areas. Currently, approximately 8,000-10,000 Southern Bald Ibis exist at over 100 colonies, however the bulk of the breeding birds are restricted to just a few large colonies in South Africa and Lesotho. Best locations for seeing this attractive bird include Wakkerstroom, Mooi River, Underberg and Sani Pass in Lesotho. 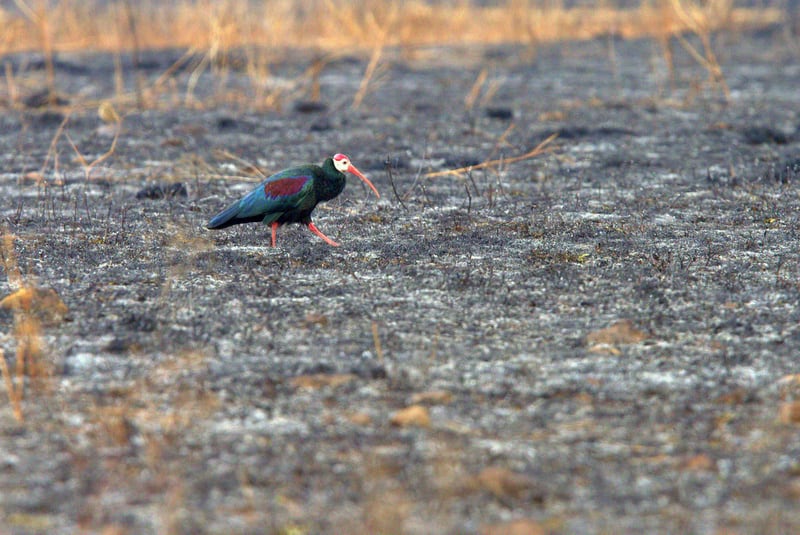