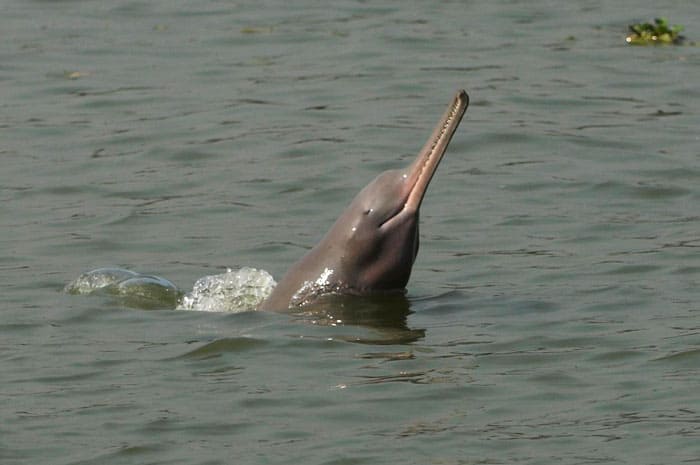 Conservationists and government officials alike are hoping that the Ganges River and Irrawaddy dolphins won’t go the way of the dinosaur—or more aptly, the Yangtze River dolphin, which recently went extinct.

The Government of Bangladesh declared three new wildlife sanctuaries to help protect these last two remaining species of freshwater dolphins in Asia. The officials created the sanctuaries in the Sundarbans, the world’s largest mangrove ecosystem. WCS helped pinpoint the locations of the protected areas through conservation work.

Although there is no global population estimate for either species, both Ganges River and Irrawaddy dolphins have disappeared from major portions of their range. Conservationists hope the Sundarbans, still home to sufficient numbers of both species, will serve as a global safety net for preventing their extinction.

The three wildlife sanctuaries safeguard 19.4 miles of channels with a total area of 4.1 square miles. The locations and sizes of the sanctuaries in the Sundarbans were determined according to a study conducted by WCS and Bangladesh Forest Department and published in the journal Oryx in 2010. The study found that the habitat of Ganges River and Irrawaddy dolphins were clumped in waterways where human activities are most intense.

The dolphins are threatened by various fatal entanglements in fishing gear and due to the depletion of their prey from the enormous bycatch of fish and crustaceans in fine-mesh “mosquito” nets used to catch fry for shrimp farming. A further risk to their survival is posed by increasing salinity and sedimentation caused by sea-level rise and changes in the availability of upstream freshwater flow.

Freshwater dolphins are among the most threatened wildlife on earth. Dam construction and unsustainable fisheries, among other human activities, highly impacts their habitat. In addition to conserving globally important populations of freshwater dolphins, the new wildlife sanctuaries in the Sundarbans will provide protection for threatened river terrapins, masked finfoot, and small-clawed otters.

Bangladesh has been recognized as a “hotspot” for dolphins, whales and porpoises. In April 2009, WCS announced the discovery of the world’s largest population of nearly 6,000 Irrawaddy dolphins in the country. A portion of this population shares habitat with the endangered Ganges River dolphin, whose range extends all the way upstream to the shadow of the Himalayas in Nepal.

Support for work on dolphins in the Sundarbans has been provided in part by the Bangladesh Academy of Sciences, Kerzner Marine Foundation, Ocean Park Conservation Foundation, Hong Kong (OPCFHK), and the Indo-Pacific Cetacean Research and Conservation Fund of the Australian Government.

This article was written and published by the Wildlife Conservation Society