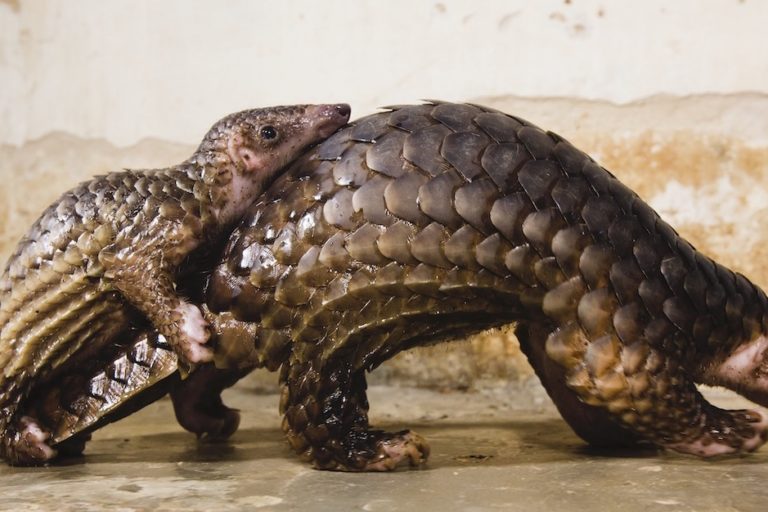 The Chinese government has officially removed pangolin scales from a list of approved ingredients in traditional Chinese medicine, a momentous move that could bring an end to the large-scale illegal trade in the scaly anteaters, conservationists say.

The eight species of pangolins are together one of the most widely trafficked animals in the world, with more than a million individuals traded since 2000, according to a CITES report.

In 2019 alone, more than 97 tons of scales from more than 150,000 African pangolins were intercepted by authorities, according to data collected by the African Pangolin Working Group.

“That’s only the scales that are intercepted, which is only about 10% of the trade, so you can imagine how many pangolins are being traded on the African continent,” Ray Jansen, chairman of the African Pangolin Working Group and member of the IUCN Species Survival Commission Pangolin Specialist Group, told Mongabay.

This trade has persisted despite pangolins being a protected species under CITES Appendix I, which prohibits all international trade except in extraordinary circumstances.

However, CITES does not regulate the commercial trade of the species within a country, which is why the sale of pangolin parts has persisted in China.

The delisting of pangolins for use in traditional Chinese medicine (TCM), which was reported on June 9 by media outletChina Health Times, follows the Chinese State Forestry and Grassland Administration’s (SFGA) announcement that pangolins are now a national level one protected species in China.

That gives pangolins the same protection as a species listed under CITES Appendix I, says Steve Blake, the chief China representative for WildAid.

This news follows the Chinese government imposing a ban on the consumption of wildlife and moving to shut down existing wildlife farms in several Chinese provinces. Those actions, in turn, were precipitated by the COVID-19 pandemic, believed to have started at a wildlife market in Wuhan.

Blake said he welcomes the news of pangolins being delisted for TCM, which he said will lead to a termination of the legal trade of pangolin products in China.

“More details are yet to come on the products already on the market or how long legal sales will still be available, but it’s only a matter of time now,” he told Mongabay. “And when they are all illegal it sends a very clear signal to both the consumer and enforcement officers, leaving no room for confusion or laundering illegal products. It is a very significant step in curbing the pangolin trade. It’s a very similar situation to what happened in 1993 when tiger bone and rhino horn were removed, recognizing that the use of these products in the practice is not sustainable with such rapidly depleting populations, and that there are many viable alternatives available.”

But it’s doubtful the trade will end overnight, Blake said, adding that more work is required to enforce these new rules.

“There needs to be a combination of clearer regulations, stronger enforcement, and stronger public awareness to effectively end these wildlife consumption issues,” he said. “All three of these are headed in the right direction, but just last year alone saw authorities around the world seize 130 tons of pangolin products. This is enormous. There needs to be even more initiatives to reduce demand and punish illegal sales to end this trade. But these two recent announcements from China will help with that tremendously.”

Pangolin scales are widely used in TCM based on the belief that they have special medicinal and spiritual qualities, despite only consisting of keratin, the same substance that makes up human hair and fingernails. The scales are ground up into a powder and sold in more than 60 different commercial products in China, according to Jansen, who works with the South African government to monitor the trade.

“Banning pangolin scale powder out of Chinese pharmacopoeia means literally that there is and will be no more demand,” Jansen said.

He added he doesn’t believe the pangolin trade will “go underground” following the announcement.

“Once it’s banned, I think it’s going to be very, very difficult to make it commercially available in China because it [TCM] is almost like Western medicine and regulated,” he said. “So it’s a massive turning point in terms of the conservation of all eight species of pangolins.”

This article by Elizabeth Claire Alberts was first published by Mongabay.com on 10 June 2020. Banner image caption: A baby pangolin holding onto its mother. Image by Paul Hilton for WildAid.