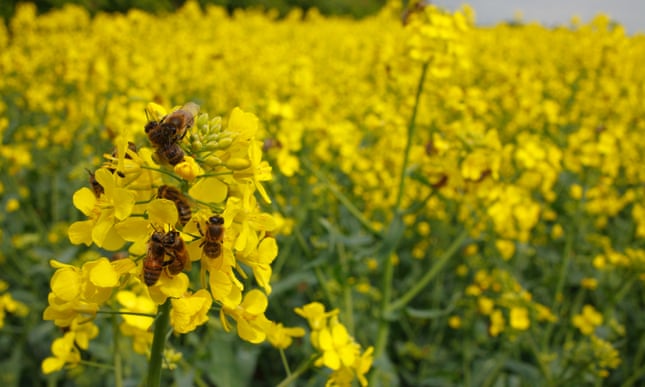 Three pesticides banned in Europe for their potential to damage bee populations could pose an even greater threat than was thought, according to a new assessment by the European Food Safety Authority (Efsa).

Already proscribed for seed treatments and soil applications, the Efsa analysis says that clothianidin, imidacloprid and thiamethoxam also pose a ‘high risk’ to bees when sprayed on leaves.

The UK is currently facing a legal challenge to an emergency exemption it granted, allowing use of two of the substances, after protests by the National Farmers Union.

But far from supporting the British case, the advisory expert assessment will add to pressure for an extension of the ban to apply to fruit orchards after blooming, and crops gown in greenhouses, Greenpeace says.

“The commission should expand the EU-wide ban to cover all uses of neonicotinoids on all crops, and end the self-service approach to derogations. Viable non-chemical alternatives exist and the EU should encourage farmers to use them,” said the group’s agriculture policy director, Marco Contiero.

“The evidence of harm is clear,” added Paul de Zylva, senior nature campaigner for Friends of the Earth. “Questions need to be asked about how these products were ever approved for use when they were not tested for their effects on different types of bees.”

Use of the prohibited substances has been linked to dramatic declines in bee populations. The EU’s recommendations allow exemptions to the ban under some circumstances, and a review of their impact is expected in Brussels by the end of the year.

José Tarazona, the head of Efsa’s pesticides unit told the Guardian that the new study backed previous risk assessments, in showing (or being unable to exclude) high risks to bees from neonicotinoids.

“It is clear that in some cases there is data suggesting high toxicity and potential risk from these substances,” he said. “We have less information for pollinators like bumblebees and for these species we take a precautionary and conservative approach in applying an additional safety factor for ensuring their protection, and that of other species.”

More than a quarter of European bumblebees – and nearly one in 10 of all honeybees – are at risk of extinction, according to the International Union for the Conservation of Nature’s red list for bees.

But industry groups deny any link between the disappearing bees and pesticide use. Syngenta, which manufactures one of the banned substances even threatened to sue Efsa officials involved in the original risk assessment.

Jean-Charles Bocquet, the director general of the European Crop Protection Agency complained that the latest Efsa opinion relied on a bee risks guidance document that had not yet been approved by an EU standing committee. “As in 2013, Efsa’s latest review of neonicotinoid pesticides has relied on an unapproved and entirely impractical regulatory standard,” he said.

A spokesman for Bayer, which manufactures the other two neonicotinoids, said that it would be requesting clarity from the commission about the document’s regulatory status.

“The company is very concerned about honey bee health, but we do not think that further restricting certain uses of neonicotinoids will make any meaningful contribution to improving the situation,” Utz Klages said.

He attributed declines in European bee numbers to the weather, viruses and the availability of food and nesting sites.