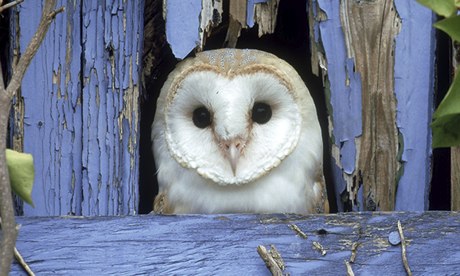 Ornithologists say 2013 will be viewed as the worst year ever recorded for one of Britain’s favourite farmland birds. They fear that there are now fewer than 1,000 breeding pairs of barn owls in England, following four years of extreme weather that have resulted in the population of the protected bird declining by more than three-quarters. In a typical year, conservationists estimate, Britain should be home to as many as 4,000 pairs of the birds.

Fears about the decline in the barn owl population have been growing for many years. The birds were a common sight on farmland in Britain a century ago, but numbers had declined by 70% by the early 1980s, according to some reports. Over this summer, the trust warned that the owl was facing a “catastrophe” and now, following an end-of-year assessment, the true scale of the birds’ plight has been revealed.

“They have gone from scarce to rare,” said David Ramsden, head of conservation at the Barn Owl Trust. “The scale of the decline is not normal.” This year, occupancy of nest sites has been between 5% and 15% of previous levels, and for large parts of the country the figure has been even lower.

Ramsden said four years of extraordinary weather had been devastating for the owl, whose distinctive white, heart-shaped face, has made it an endearing feature of the countryside.

The cold winters of 2009/2010 and 2010/2011 had a devastating effect on the species, and the wet June of 2012 killed many nesting owls. March this year was the second-coldest on record, and led to a high mortality rate in adult barn owls. “It’s been a catastrophic year,” Ramsden added. “Barn owls now need all the help they can get.”

Voted Britain’s favourite farmland bird in 2007, the barn owl has occupied a central place in the nation’s folklore. In parts of northern England it is good luck to see an owl. However, in other parts it is associated with death.

Ramsden said that much now depended on the winter ahead: “It will take at least two years for the barn owl population to start to recover – providing that we don’t have any more extreme weather events.”

The owl’s plight appears not to be confined to Britain. Earlier this year, Dr Akos Klein of the Hungarian Barn Owl Foundation said that his country had seen a similar dramatic decline.

“Out of 30 regular nest sites, we found one active nest and one solitary bird,” he said. “This is pretty much the case all over Hungary. Our March this year was like January.”

In this country, a third of all barn owl young end up dead at the side of roads or on railway lines. There are now also concerns that the proposed high speed train line between London and the Midlands could have a serious impact on the bird population.

According to an environmental audit carried out in 2010 for HS2, the company behind the project, the new railway line would “result in the loss of all breeding populations of barn owls within 1.5km of the proposed scheme”.

An even more significant – but so far unquantified – threat is the widespread use of pesticides. The Barn Owl Trust said that the bodies of 91% of the birds that had been found dead had contained rat poison, which has heightened fears that the use of rodenticides is having a serious impact on the birds’ mortality rates.

This article was written by Jamie Doward for the Guardian.