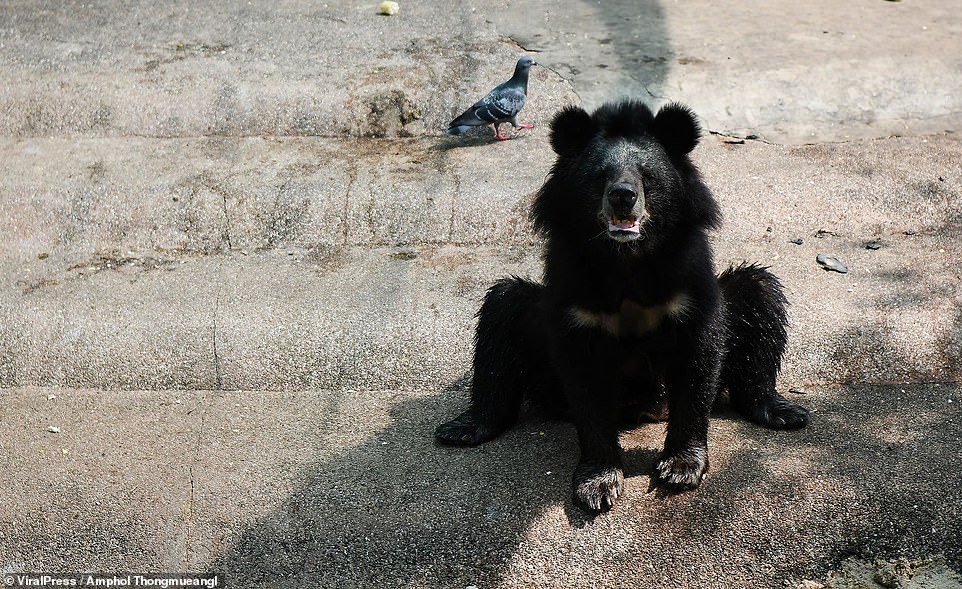 A notorious Thai zoo has sparked concern for the health of its animals after it reopened to visitors following the Covid lockdown.

A vet dispatched by the government said the animals were thin because they were being kept in cramped enclosures where they had to fight for scraps of food at the Samut Prakan Crocodile Farm and Zoo in Bangkok.

Regular visitors believe the zoo failed to keep its animals well fed and looked after during lockdown because it was not making money.

Animal rights group People for the Ethical Treatment of Animals (PETA) has campaigned for several years for the zoo to be closed down, calling it ‘hell on Earth for animals’.

Local photographer Umpon Thongmeungluang, who lives nearby, said he was concerned after seeing the condition of the animals over the weekend.

Umpon said he almost cried when he saw the extremely thin tigers pacing anxiously around a pond inside their enclosure.

He said: ‘The animals were all really thin that I felt sorry for them. I was upset when I saw them. The tigers kept walking in circles and I wondered if they were hungry or hoping that someone would feed them.

‘I had many memories of the zoo but things looked different when I returned after the lockdown.’

Umpon took pictures of the tigers including the other malnourished wildlife such as cows, bears, crocodiles, and monkeys. They were later shown to wildlife officials.

After seeing the pictures, government staff from the National Park, Wildlife and Breeding Department officials inspected the zoo on February 15.

They arrived with reporters who saw the poor state of the animals that had allegedly starved during the lockdown while the zoo was closed to tourists and struggling without any income income.

However, zoo manager Uthen Yangprapakorn claimed to the officers that all of their animals are well taken care of.

He said: ‘The tigers here are healthy. You can’t force a tiger to be the size that you want. What’s important is that they don’t have any health problems.

‘The African cow species are also naturally thin. It is not the same as the cow in our homes that are bigger and fatter, therefore you can’t compare them together.’

Uthen said that ‘the zoo cannot change the sizes of the animals to suit the tastes of the tourists’.

He added: ‘Crocodiles are like humans in their old age. They become thinner and frail as they get older.’

Meanwhile, Girna Nordechanon, a veterinarian from the Department of National Parks, Wildlife and Plant Conservation did a health check on the animals and found that most of them do not have serious problems like the manager claimed.

However, she noted that the animals are thin because their living spaces are too cramped and the food given to each cage is not enough to keep the animals well-fed.

This article was first published by The Daily Mail on 18 February 2021. Lead Image: One of the scrawny-looking bears sits in a grim concrete enclosure at the zoo in Bangkok. After seeing the pictures, government staff from the National Park, Wildlife and Breeding Department officials inspected the zoo on February 15.