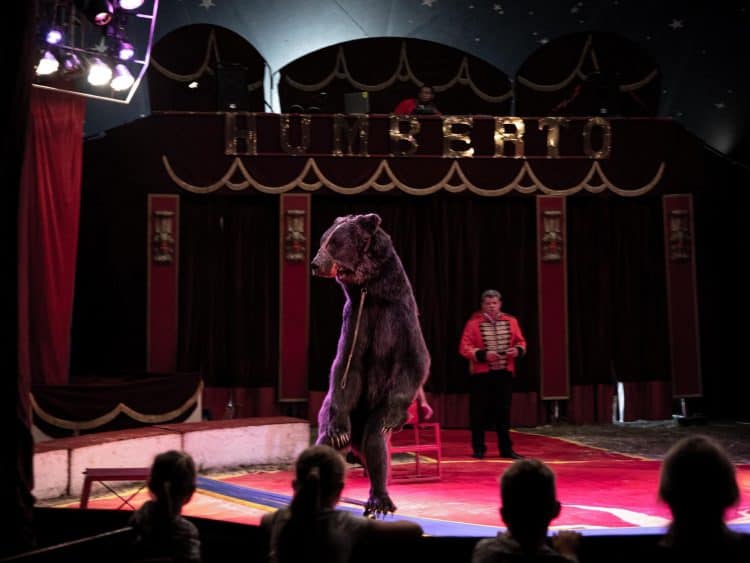 “Horrendous” cases of animals being abused to please tourists across Europe have been filmed by investigators.

In one example, a wild bear is put on a skateboard, made to stand upright and pushed on a slide for circus audiences in the Czech Republic, despite looking sick and underfed, the researchers say.

In Germany footage shows elephants being made to sit on small chairs and stand on one leg after “brutal” behind-the-scenes training, it is claimed. In Spain tigers are kept on chains for tourist selfies, while researchers found bears living in barren moats, also in the Czech Republic.

The practices are believed to also fuel the illegal wildlife trade by encouraging unregulated commercial breeding. Researchers for global animal welfare organisation Four Paws filmed a brown bear made to perform tricks including riding a skateboard and dancing with a hula hoop for cheering crowds at the Czech Republic’s Cirkus Humberto.

Other shows featured lions, zebras and elephants, according to the witnesses, who said the conditions and displays were “far from the life the animals would have in the wild” and that their “ecological needs simply cannot be met”.

Cirkus Humberto says none of its animals is forced to do anything, that play stimulates their brains and that activist groups who “spread misinformation” whip up xenophobia against circus people.

At a medieval festival in France, a muzzled bear on a leash performed on a stool and a slide, and wolves had to jump through hoops.

“The wolves look emaciated and seem stressed, while the bear appears visibly uncomfortable with the leash and muzzle,” said Kieran Harkin, of Four Paws.

“Between and after performances the wild animals are locked into small trailers. None of their ecological needs is considered.”

Four Paws said in many cases during the investigation across Europe last month animals were seen kept in small enclosures or cages, causing psychological and physical damage. The group says while Asia’s wildlife tourism industry is widely reported, little is known about the “ruthless” abuse closer to home and the evidence found was “horrendous”.

At German circuses, visitors rode on elephants’ backs – controversial because behind-the-scenes training often involves hitting the animals with sharp hooks. In circus rings they were made to sit on small chairs, play football and stand on one leg.

Researchers say that every year there is a tug-of-war between the elephants and villagers, and in winter the animals have to pull sledges. “Elephants are highly intelligent herd animals who migrate and occupy vast areas of land. It is extremely cruel to keep them enclosed in small spaces and exploit them,” said Mr Harkin.

“Lack of movement in captivity can result in joint or back problems, in addition to the indeterminable psychological distress.” Tourists in Spain were put at risk when they played and took selfies with a tiger, the researchers said.

“The footage shows how the tiger snaps at a visitor while playing chase – behaviour expected from a tiger but that makes interactions extremely dangerous for humans. “The tiger is a predator weighing about 300kg with sharp teeth and claws. Her natural instincts cannot be suppressed.”

The female tiger is among more than 100 other wild animals rented out for film productions and used as tourist photo props. “Tigers are commercially traded and treated as a commodity throughout Europe, and this can overlap with illegal tiger trade,” said Mr Harkin.

At a French zoo an animal tamer went into a cage alone with up to 10 tigers; elsewhere orangutans were kept in small cages. “Ironically a video is played before the show pointing out the importance of conservation of tigers. The commercialisation and exploitation of these animals have nothing to do with the conservation of wild tigers – on the contrary,” he said.

Back in the Czech Republic, at a castle in Cesky Krumlov, investigators also saw three bears kept in a stone moat, denied the chance to climb or roam free. The Independent has asked the castle authorities and a Spanish company where tourists take selfies with tigers to comment.

“It is unacceptable that in the 21st century it’s legal in Europe to abuse wild animals for entertainment,” said Mr Harkin. “What happens to the animals once they become too old or sick to perform or when the cubs are too old for petting?”

Hynek Navratil, director of Cirkus Humberto, said their animals, which were in “perfect condition, better than in zoos”, were regularly checked by vets and were considered family members and colleagues, trained with a rewards system. Stereotypical behaviour from stress is never seen in Czech circuses, he said. “We play with them, it keeps their brains working.”

“Activist groups spread disinformation and stimulate xenophobic behaviour towards people in circuses. Because of that, we are reporting death threats to police, every week,” Mr Navratil said. But the circus “defeated” the groups by opening its gates to the public, including training, so people can see the conditions. “We have nothing to hide,” he went on.

“We do not take Four Paws and such organisations as partners to dialogue. They do not not know anything about us, nor they do not know anything about our animals. We cannot respect them.” Illegal breeding was not possible, he said, adding: “Our animals are not slaves. Sometimes some animal does not want to perform on a certain day. Then it does not.

“These animals cannot be considered wild. According to modern genome studies, it has been proven that domestication takes a sudden twist within five generations.”

This article was first published by The Independent on 16 September 2019.