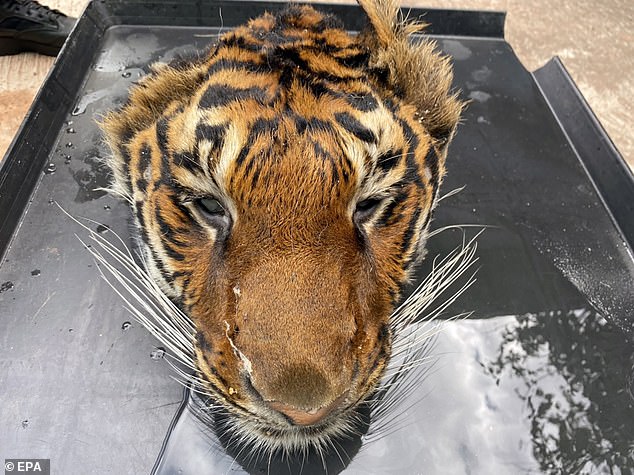 A beheaded tiger has been discovered among several other animal corpses during a wildlife trafficking raid at a private zoo in Thailand. Thai wildlife officials made the shocking discovery at the Mukda Tiger Park and Farm in the northeastern province of Mukdahan.

They found a severed tiger head and other tiger carcasses, including body parts, in a crackdown on suspected wildlife trafficking. Five live tiger cubs suspected of being illegally smuggled into the zoo were also seized during the raid.

The five tigers had been declared as having been born at the facility, but DNA tests showed that three of them – one female and two males – were not related to any tigers in the park, suggesting they had been smuggled in, officials said.

Authorities removed the two other tigers for further forensics testing and are currently investigating the discovery of the tiger’s head at the zoo.

The results of DNA tests on a further 20 tigers, including two cubs, will be released in December, according to the Bangkok Post.

The raid comes after an early crackdown at the private zoo in January 2018, when Department of National Parks, Wildlife and Plant Conservation (DNP) officials had confiscated scores of locally protected species including red pandas and monkeys such as grey-shanked doucs. Since then, the zoo has been under government watch.

The owner of the tiger park faces up to five years in prison if convicted of smuggling in wildlife species and another three years if convicted of providing false information.

Authorities said that the Zoo’s licence would be suspended for 90 days.

‘The authorities have done a great job looking into the legality of this tiger ownership,’ said Maethinee Phassaraudomsak, a researcher at animal rights NGO Traffic.

‘We hope investigations reveal the true provenance of the tigers and spurs checks on all animals held at this facility.’

There have been a series of cases involving the illegal trade of captive tigers and Thai zoos.

In 2016, Thai authorities raided the Tiger Temple in Kanchanaburi province that had been suspected of illegally breeding and trading in tigers. Over 130 live tigers, more than 40 dead tiger cubs, tiger pelts and 1,500 tiger skin amulets were among the wildlife products seized.

Over half – 58 per cent – of the Tigers seized in Thailand between 2000 and 2018 originated from captive breeding facilities – largely involving whole carcasses and live animals, with the largest proportion coming from the 2016 seizure, according to Traffic.

In 2017, a dozen tigers were seized from a pig farm in Chon Buri province where several species of wildlife had been kept illegally.

‘Today’s actions are very much in line with the global call for better record keeping, monitoring and enforcement of captive tiger facilities taken at CITES, to prevent laundering or leakage of animals into the illegal trade,’ said Kanitha Krishnasamy, Director for Traffic in Southeast Asia.

‘Thailand’s revamped wildlife law with higher penalties and its well-established forensics expertise places it in a good position to lead on this crackdown, to find the parties responsible for this decades-long problem.’

This article was first published by The Daily Mail on 1 December 2020. Lead Image: Authorities said that the Zoo’s licence would be suspended for 90 days. Pictured: the slain tiger head.