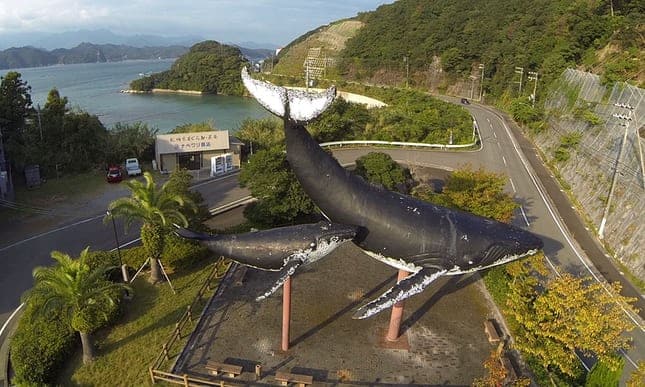 The 2009 documentary The Cove, which depicted the practice of corralling and slaughtering dolphins in a small bay tinged crimson from the blood, has visited a bewildering past decade upon the small Japanese town of Taiji.

An outburst of international outrage at Taiji’s 400-year-old practice of dolphin hunting saw activists descend upon the coastal town to demand change, as well as lacerating criticism from celebrities and politicians including the then US ambassador to Japan, Caroline Kennedy, who called the activity “inhumane”.

A year after its release, The Cove won an Academy award for best documentary, with producer Fisher Stevens grasping the Oscar statue as he explained how the work was an “entertaining film that also tries to enlighten everybody”.

This was the moment that New York-based Japanese film-maker Megumi Sasaki felt provoked to craft a response. “There’s a saying in Japan about a little fishbone stuck in your throat,” she tells the Guardian. “It’s an issue that bothers you but you can’t reach it. This was my fish bone and I needed to speak up. I decided to make a film as soon as The Cove won the Academy award.”

Sasaki’s film, A Whale of a Tale, spans six years in and around Taiji as fishermen and activists face off, at times unpleasantly. “It’s wrong for outsiders to come in and try to destroy our history and culture,” says a whaler at one point, as protesters from the Sea Shepherd group film his comrades and hurl criticism at them. One of the activists calls a whaler a “dumbass shit”.

Dolphin hunting takes place elsewhere in Japan but Taiji is the only place where “drive” hunting occurs. This involves forcing dolphins into the now infamous cove, where they are then penned in by long nets. The dolphins are then either sold on to aquariums to become performing exhibits or butchered for meat.

In the US and most of Europe, it’s become axiomatic that the killing of dolphins and whales is barbaric and unnecessary. Dolphin shows are also coming under more scrutiny. Ric O’Barry, who brandished a pro-dolphin flag on stage at the 2010 Oscars, used to train dolphins for the popular US TV series Flipper until one, Kathy, died.

O’Barry is convinced that Kathy intentionally closed her own blowhole and committed suicide because of her distress. He has spent the following 40 years campaigning against dolphins in captivity and, latterly, the Taiji hunts. “I created this dolphin amusement industry,” O’Barry says in A Whale of a Tale. “I used to be motivated by guilt, now I’m motivated by progress.”

Sasaki, whose previous documentaries include 2008’s Herb & Dorothy, uses A Whale of a Tale to question whether progress would be better served in bridging a yawning cultural divide rather than simply shutting down the Taiji hunt.

Residents of the town are shown ladling whale meatballs into cups and enjoying chunks of striped dolphin. At other points, they burn incense in ceremonies that deify whales, the likeness of which adorn almost every large wall in Taiji. The whalers mill glumly around the dock as they are harangued. Sasaki is pointing to a long cultural practice that has collided with an enraged west that has purged itself of whaling.

“The Cove was a well-told story but it was so one-sided and was full of prejudice,” she says. “It was like they were pointing a camera at people who can’t raise their own voice. It’s like bullying.”

A Whale of a Tale illustrates how a sophisticated campaign by groups such as Sea Shepherd has, perhaps unsurprisingly, barely been countered in the court of public opinion by a town of barely 4,000 people. But it does also acknowledge how nationalist figures in Japan have seized upon the issue.

Consumption of whale and dolphin meat has been declining steadily in Japan, to the point where many young people in Tokyo have never eaten it. Sasaki has spent the last 40 years in New York but grew up in Sapporo, where she remembers only eating whale meat for the occasional school lunch.

“The older generations who grew up after the war, when there was a food shortage, have a sense of nostalgia towards it, but it was never my favourite food,” she says. “I didn’t even have dolphin until I met the leader of the whalers in 2014 and went to his house. He gave me dolphin sashimi, I suppose it was a test. It was delicious, it tasted like beef carpaccio with a fishy taste.”

Even as consumption of whale and dolphin meat has dropped, it has been embraced as an intrinsic part of Japanese character by rightwing activists, some of whom are shown in A Whale of a Tale, telling Sea Shepherd to go home via loudspeakers mounted on cars.

The dolphins slaughtered in Taiji aren’t considered at risk of becoming extinct, so the hunting throws up broader questions. Do we have the moral right to kill animals in this way? What about pigs and cows dispatched in miserable conditions in the west? Who has the right to tell who what to kill or eat? The overseas opprobrium has, ironically, breathed life into a dying practice.

“As long as we have pressure from outside the country, the more determined Japanese people are to continue it,” Sasaki says. “It’s such an irony. If these activists just stopped pressuring Japan, the younger generation would not care about eating this and it would basically all go away.”

Sasaki said that the hunt points to broader divides between countries such as the US and Japan. “Many Christian western countries think in terms of a hierarchy, where humans are near the top, just below God, and then nature is beneath us,” she says.

“In Japan, people think humans are only part of nature and no animal is better or worse. It’s very puzzling for them when westerners say dolphins and whales are intelligent and human-like, because all creatures are special. What makes an intelligent animal, anyway? Birds can fly halfway around the world without GPS, isn’t that intelligence? We hand-pick the animals we like, like dolphins or elephants that we think are majestic, but we don’t pay attention to others that are endangered.”

This cultural misalignment is exacerbated by a certain stubbornness in Japan, Sasaki says. “Tradition in Japan is something that is just handed down, whether it’s good or bad, whether it fits today’s world or not. In the west, there’s more of an examination of these sort of traditional activities.”

Ultimately, Sasaki hopes she has presented something more even-handed than The Cove, where the dolphin hunters were largely seen in footage shot from undercover cameras disguised as rocks. She doubts it will change many minds, however.

“This town of Taiji has been totally bullied by the international community but I made it clear to the fishermen that I’m not going to take sides,” she says. “I’m not here to change minds, I’m not an activist, I’m a storyteller. I want people to think about new perspectives because the world is complicated, it’s not black and white.

“There are universal themes about how we coexist. Things are so divided in the world, we don’t listen to each other, we demonize the other side of the argument. This is just a microcosm of that.”

A Whale of a Tale will open theatrically in New York on 17 August and Los Angeles on 24 August with a nationwide release to follow. A UK date has yet to be announced.

This article was first published by The Guardian on 14 Aug 2018.