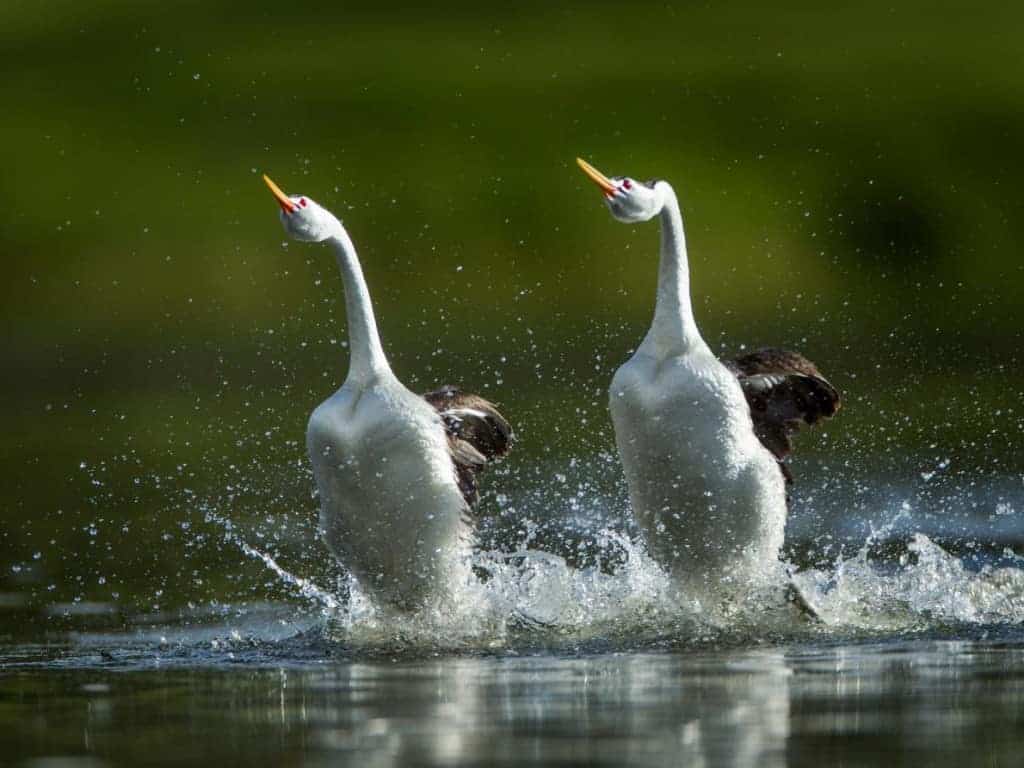 If you think dating is hard, be glad you’re not a grebe. These North American waterbirds have high standards when it comes to attracting and keeping a mate: If either a male or female grebe can’t “walk” on water, they’re out of luck.

Western and Clark’s grebes engage in a maneuver called rushing during the spring mating season, in which they sprint up to 66 feet (20 meters) across the water in coordinated groups of two or more in about seven seconds.

They’re the largest vertebrates with the ability to walk on water, but no one had really looked at how they did it—until now.

A combination of up to 20 steps per second, forceful slaps on the water’s surface with splayed feet, and an unusual stride help these grebes defy gravity, researchers report online April 22 in the Journal of Experimental Biology.

Most animals that can walk on water are really small—like insects—and use surface tension and long limbs to distribute their weight and keep from sinking, says study co-author Glenna Clifton, a doctoral student at Harvard University in Cambridge, Massachusetts.

But larger animals such as the basilisk lizard and grebes can’t rely on surface tension alone, she explains.

To find out how the grebes accomplished this feat, Clifton used high-speed cameras to film rushing grebes on Oregon’s Upper Klamath Lake (map). She analyzed footage with a clear shot of the birds’ feet in order to track their step rate and how they moved their limbs.

Each grebe’s step started with a splayed foot slapping the water, generating between 30 to 55 percent of the vertical force needed to keep the animals from sinking. The rest came from the bird actually pushing its foot underwater, Clifton explains.

The bird then lifts its foot out of the water sideways in an arc to start the whole cycle over again. “[It’s] as if a ballet dancer were completely turned out and kicking their leg up to their ear,” explains Clifton, who is a ballet dancer herself.

The biologist isn’t sure why the grebes turn their feet out to the side. It could be that their feet are doing something under the water that just results in a wonky stride, she says.

But the grebe’s technique could have some interesting applications in the robotics world—a robot that runs on water could be used for search and rescue operations in flooded or marsh-like environments.

Previous water-running robot designs have been based on the basilisk lizard, but the grebes are probably a more efficient model for heavier objects, according to the scientists.

This article was first published by National Geographic on 22 Apr 2015.