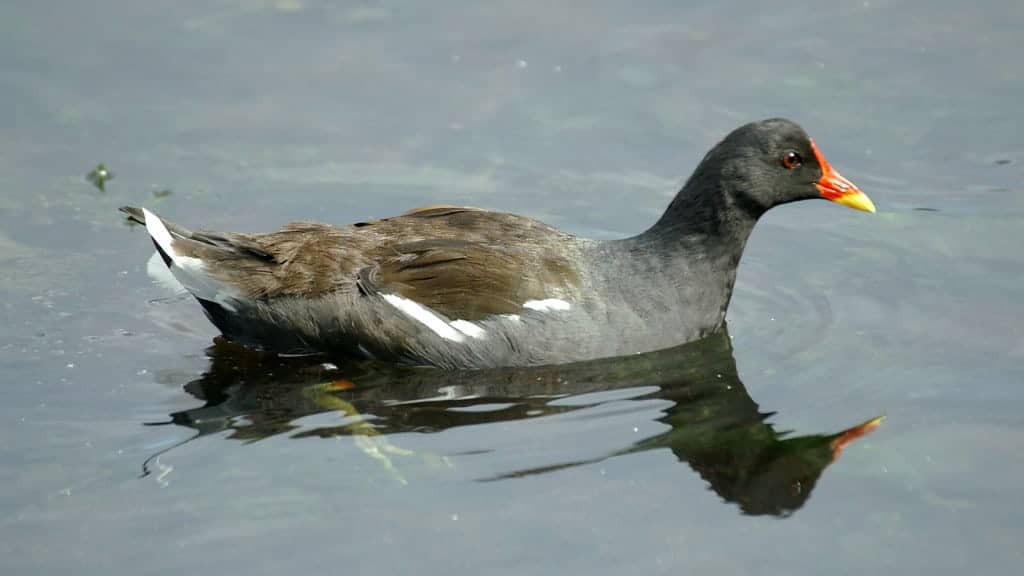 Of all Britain’s birds, few are as common and widespread, and yet so often taken for granted, as the moorhen. This humble little waterbird goes quietly about its business, eking out a life on the smallest ponds, streams and ditches, while the wider world passes it by.

Not for moorhens the vast migrations of wild geese and swans. Even its closest relative has a more exciting life: coots are among the most pugnacious of all our birds, with rival males occasionally drowning one another in their territorial fights.

Meanwhile the moorhen bobs around on the water, occasionally dipping its beak beneath the surface to grab a morsel of food. From time to time, moorhens will come on to land, walking around with their oversized green feet, the toes sporting small flaps of skin called lobes that help them paddle once they are back in their usual watery home.

Birders rarely take a second glance at moorhens, but they should, because they truly are one of our most beautiful birds.

That plumage – not quite brown, or black, or mauve, but a combination of all three – is set off by creamy-white lines along the flanks, as if dashed off by an artist in a hurry. Then there is that stunning bill: red at the base and citrus-yellow at the tip, leading the poet AF Harrold to describe the moorhen as the “single drop of blood in the darkest night bird …”

Baby moorhens are even more endearing than their parents: little balls of brownish-black fluff, they follow the adults around, paddling frantically with their tiny legs to keep up.

They do well to stick close: I once watched a family of moorhens freeze as a kestrel appeared above the narrow channel where they had taken refuge, looking up in sheer terror as the predator hovered momentarily overhead, before moving on in search of other prey.

We think of moorhens as one of our most sedentary birds, and indeed they are, spending most of their lives on the same tiny patches of water where they were hatched. But under cover of darkness they do sometimes take to the air and wander, searching the area for new pools and ponds, which might be more suitable places to live.

The final mystery of the moorhen is its name: why on earth does a bird which lives in wetlands have a name suggestive of bleak, windswept moors? In fact like so many odd names, this is due to a corruption of the English language: the “moor” in this case refers to “meres”, or small lakes, and the name moorhen simply means “bird of the marshes”.

Living in that flat, wet area known as the Somerset Moors and Levels, I sometimes wonder if the same linguistic confusion is at work here. Certainly the moorhen is one of the most common and familiar birds around my home – and, whenever I come across one, a very welcome sight indeed.

This article was written by Stephen Moss for the Guardian. Lead Image: Moorhen Gallinula chloropus by Ken Billington