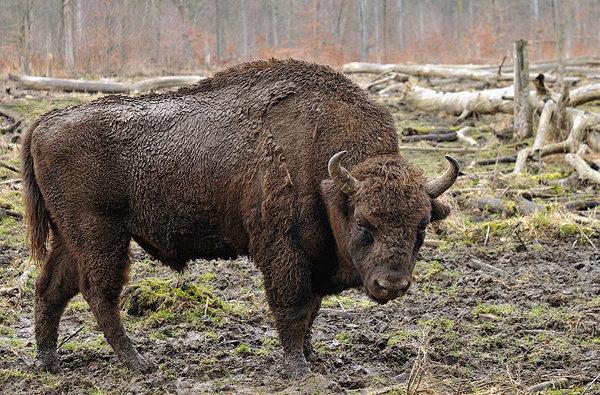 Earlier this month, officials took down a fence allowing the first herd of European bison (Bison bonasus) to enter the forests freely in Germany in over 300 years, reports Wildlife Extra. The small herd, consisting of just eight animals (one male, five females and two calves) will now be allowed to roam unhindered in the Rothaar Mountains as their ancestors did long ago.

The eight European bison, also known as the wisent, had been held in a 88 hectare (220 acre) pen for three years, while researchers conducted studies and meetings were held over their potential release. Released in the Rothaar Mountains near Bad Berleburg, the bison will find themselves in Germany’s most populated state, North Rhine-Westphalia. Experts, who say the bison pose no danger, hope in time that the population will expand to around 25 animals.

European bison once roamed across Europe and northern Asia. However large-scale deforestation along with hunting decimated their numbers until by the 1920s, the animal was extinct in the wild. Reintroductions of the European bison began in the 1950s and animals can now be found in 10 countries, but Germany is the first western European nation to see the bison again.

The European bison has also been re-introduced into Pleistocene Park in northern Siberia, a protected area that is conducting an experiment to see if the re-wilding of lost megafauna, such as bison, turns the ecosystems back into the steppe environment, which covered the region during the Pleistocene epoch.

Today around 1,800 European bison live in the wild, all of them stemming from a captive population of only 54 animals. The species is classified as Vulnerable by the IUCN Red List.