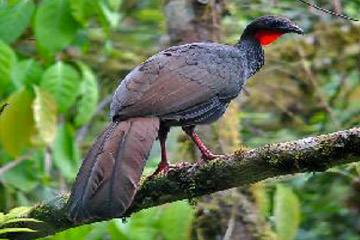 The turkey-sized, noisy, fruit-feasting guans are arguably one of the strangest wildlife sightings in the tropical forests of Central and South America. Ancient animals, these birds are members of the Cracidae family—which also include equally-odd currasows and chachalacas—and are actually distantly related to megapode, or mound-building, birds of Australiasia. A new study in mongabay.com’s open-access journal Tropical Conservation Science looks at a particularly endangered guan: the Cauca gaun (Penelope perspicax).

Found only in Colombia’s Cauca Valley—for which it is named—the Cauca guan has lost around 95 percent of its habitat and today survives only in a few forest patches. With a total estimated population of less than 1,000 mature individuals, it’s no surprise then that the IUCN Red List categorizes the species as Endangered. To determine how the Cauca guan is faring, a team of scientists led by Gustavo H. Kattan, counted guans across three forests.

“There is very little documentation of actual densities for tropical birds in general and endangered species in particular,” Kattan and his colleagues write in the paper.

“Secondary forest offers abundant fruit resources that are commonly eaten by guans, which may explain the high density observed in this habitat type in Bremen. Cauca Guans also use vegetation strips along streams,” the authors write, adding that “this opens the possibility of using corridors to connect populations currently isolated in forest patches, but to implement this strategy other factors such as increased vulnerability to hunting have to be taken into account.”

Many species of guan are gravely imperiled by overhunting as the birds are large and often roost for long intervals, making them easy targets.

Despite the high densities uncovered at Bremen Nature Reserve, the scientists say the species is still gravely threatened.

“Although the Cauca Guan is not a habitat specialist and may reach high densities under some conditions, globally this guan remains rare and efforts for its conservation should be sustained.”