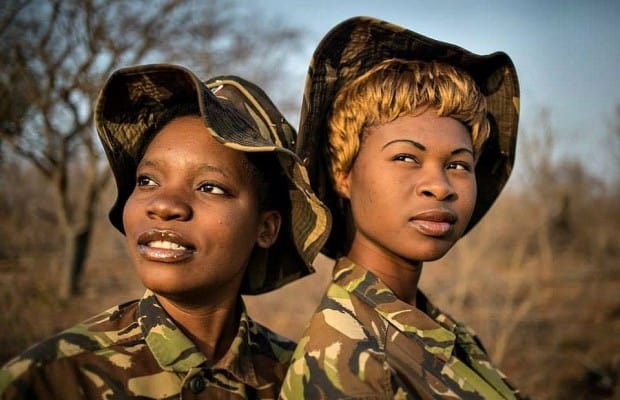 The team of brave heroines were awarded the “Resilience Through Cultural Diversity Award” and the founder Craig Spencer won the “Change Maker in Tourism Award” proving that work that The Black Mambas do is so incredibly important! “Keep having faith in what you are doing, because you are changing the world for better. We are again so proud of you,” Craig Spencer said.

Within the first year of operation, the Black Mambas were invited to expand into other regions and now protect all boundaries of Balule Nature Reserve.

The teams operate within Balule Nature Reserve, part of the Greater Kruger National Park and work to the concept of the “Broken Window” philosophy, striving to make our area of influence the most undesirable, most difficult and least profitable place to poach any species.

“Coming from disadvantaged communities and breaking strong patriarchal tradition, these courageous women focus on eliminating illegal wildlife trade through conservation, education and the protection of wildlife, helping to ensure the long term survival of threatened and endangered species in the area.”

The Black Mambas are much more than just an anti-poaching unit. Whilst their main objective is the security of the reserve and the protection of wildlife, they also strive to create a strong bond and educate the communities that live on the boundaries of Balule and the Greater Kruger Park to create a proud, sympathetic and patriotic community with pro-environmental ethos.

The Black Mamba’s patrol 20km a day without weapons looking for wire-snares, fence break-ins and poachers. The job is a risky one, but the women feel strongly about the conservation of the animals!

The woman do fear for their lives as poachers can be ruthless but fear the danger that hangs over the Big 5 more. They want to change not only the rhino’s lives but also their own, bettering their futures. They believe they are making a difference, and with the help of the programmes, the Black Mamba’s are changing the communities around them too.

“They say the job that we are doing is for men, but nowadays things are equal. They treat us equally… we are the first ladies to become the Black Mamba’s, to become a ranger!”

These women with a passion for wildlife and rhino conservation, are the voice in the community through their conservation work. They want their communities to understand that the benefits are greater through rhino and wildlife conservation rather than poaching, addressing the social and moral decay that is a product of the rhino poaching within their communities. They are concerned for their children as the false economy has brought loose morals and narcotics into their communities.

“Yes, our main objective is the protection of wildlife, but we also strive to create a strong bond and educate the communities that live on the boundaries of Balule and the Greater Kruger Park to the benefits of saving their natural heritage. We believe that the war on poaching will not be won with guns and bullets but through the local communities and education.”

The women have pride for the way they are facing the poachers. The Black Mambas are not only Anti-Poaching Rangers; they are role models who cherish life and do not want to live in a village of orphans and widows.

“I believe that by going unarmed, it makes me proud, that I’m not here for a fight. I am only here to do my job to protect this area.”

This article was first published by Goodthingsguy.com on 25 July 2019.

thank you, ladies, for your compassion and action

Not sure whether going in unarmed is such a great idea, they could end up dead, but if it works then fair enough. In a kill or be killed situation I know where I’d be.

Wonderful Heroes for Wildlife <3. Thank You for Protecting Africa's Wildlife! <3

Congratulations ladies. Respect for you.