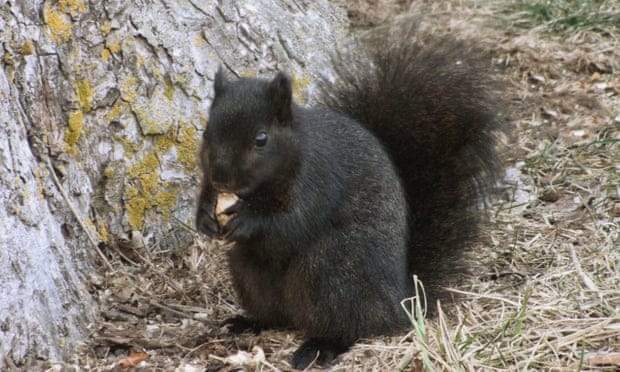 In popular myth they are an aggressive new “super” species pushing out the grey squirrel just as it has displaced the red squirrel.

But the black squirrels seen scampering through southern England are a form of grey squirrel created by wild interbreeding between greys and fox squirrels in North America, according to research.

Black squirrels are the same species as the grey but acquired their coat through a faulty pigment gene identical to that found in the fox squirrel, a closely related species that is also native to North America and has black variants.

Helen McRobie of Anglia Ruskin University worked with colleagues from Cambridge University and the Virginia Museum of Natural History in the US to test DNA from grey and fox squirrels across North America. They discovered that other “signatures” on the mutated gene were more closely related to the fox squirrel, suggesting the mutation probably arose in the fox squirrel and passed to the grey through interbreeding.

McRobie said the most likely explanation for the black version of the gene being found in the grey squirrel was the result of a black fox squirrel joining a grey squirrel “mating chase” and mating with a female grey.

“The fact black grey squirrels have become so common right across North America is possibly because black fur offers a thermal advantage, helping them inhabit regions with extremely cold winters,” she said.

“This may have contributed to the expansion of the grey squirrel’s range during the past 11,000 years, following the end of the most recent ice age, helping them spread further north into Canada.”

In Britain, black squirrels were imported from North America and then escaped from private zoos. The first was spotted near Letchworth in 1912; today black squirrels are most commonly seen across Hertfordshire, Bedfordshire and Cambridgeshire.

The spread of grey – and black – squirrels has caused the extinction of red squirrels in much of England because the native reds succumb to the squirrelpox virus, which is carried by greys but leaves them unscathed.

Another study in which grey squirrels on the Wirral were tested for squirrelpox every month has found that greys survive in the wild even when carrying the virus for months.

Prof Julian Chantrey and colleagues at Liverpool University tested more than 100 grey squirrels over 16months. In research published in the journal Epidemics, they found the squirrelpox virus in more than 80% of grey squirrels, with greys repeatedly reinfected with the virus.

Chantrey said: “It shows that the virus is very widespread and greys are at a very high risk of introducing pox to red populations.”

This article was first published by The Guardian on 13 August 2019.