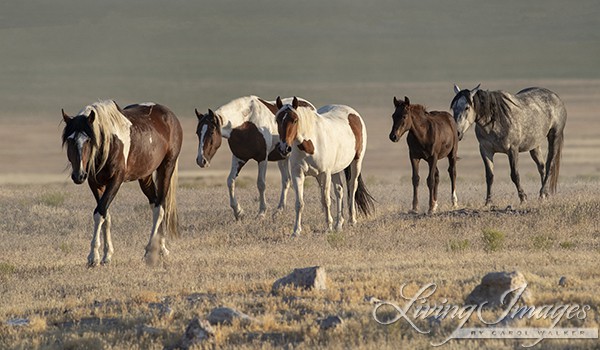 Yesterday the BLM issued a press release on its Decision Record for the Onaqui Mountain Wild Horse Herd in Utah. The BLM says “The objectives of the approved population control measures are to slow the herd’s population growth and achieve and maintain a balance between wild horses on the range and other public land resources.”

You can read the Decision Record and all the other documents here: https://go.usa.gov/xQQFE

Their plan is to remove 465 wild horses from the Herd Management Area in 2019 using both bait trapping and helicopters.

Currently the population is estimated to be 505 wild horses, but the BLM is estimating that with foals born in 2019 that the population will be at 586, and they want to bring the herd down to the low end of the Appropriate Management Level of 121 wild horses.

As usual, the BLM does not allow for any foal mortality, which can be as high as 40% in the first year of a foal’s life, nor do they allow for deaths of older horses during the winter.

The BLM does not say WHEN they plan to do this in 2019 – it could be as early as February or as late as the fall. They cannot use helicopters during foaling season which according to the BLM starts March 1.

If the BLM brings the numbers of the herd down to 121 wild horses, this is far below the number necessary to maintain genetic viability, which according to the leading wild horse geneticist Dr. Gus Cothren is 150 adult wild horses.

This risk to the genetic health and survival of this herd will be compounded by the continuing plans of the BLM to use birth control, PZP and Gonacon, to control the birth rate of a herd whose numbers will already be too low.

Ten wild horse advocacy groups including Wild Horse Freedom Federation as well as 7872 individuals submitted comments regarding this plan earlier in the year, and there was tremendous public outcry against this plan.

This herd is much loved by members of the American public who come from all over the country to visit, observe and photograph this herd. Volunteers had begun documenting and training to give birth control to the mares in this herd in order to control the population, and keep the horses in their herd management area with their families where they belong. But the BLM disregarded the wishes of the public and plan to proceed with decimating this herd.

As usual, the BLM has no concern for what happens to these horses once they are removed. If they proceed as they have been doing with herds rounded up in Wyoming this last year, the youngest will be offered for adoption, but likely the public will not even be able to see, let along adopt or purchase all the adult horses over 5 if they get shipped to the private facilities like in Axtell, Utah or Bruneau, Idaho. Instead these horses will be shipped to holding facilities or sold by the semi-load and end up at slaughter. This is wrong. This plan is cruel, inhumane, dangerous to the continued heath of the herd and against the wishes of the people who care about these wild horses.

America’s wild horses do not belong to the BLM, they belong to all of us, and they deserve to live their lives wild and free in their families in their homes, and managed in the most humane and least invasive way possible.

This article was first published by WildHoofBeats.com on 15 December 2018.

What can you do to help?

Considering the numbers of cattle (which we, the public are subsidizing) versus the number of wild horses (the BLM’s method of “guesstimating”) even with the BLM’s numbers – the cattle outnumber the horses by thousands, if not millions. And we, the public, are paying millions to make up the cost of the “grazing allotment system”. There is no way the wild horses are completely responsible for the damage to our public lands & forests. Over 20 million acres have been zeroed out of wild horses over the past years – HMAs where wild horses are no longer allowed. Treating wild… Read more »

Hopefully the start of many invasive horse culls. It’s not their fault, of course, but the damage is immense. A few herds of historically significant horses should be managed, but basically this is a man brought problem, easily fixed, for the betterment of all the other members of a fragile ecosystem. Like feral cats.

If only the BLM, TROPHY HUNTERS, and ALL OTHER ANIMAL KILLERS COULD BE CULLED THEN THE WORLD WOULD BE FREE OF THEIR EVIL INTENTIONS!!!

Can’t they move them some where they are safe

So how do we destroy the BLM? There must be a way to stop this before they can carry it through. Some judge, some legal loop, something – nonviolent, of course.

Bureau of land mismanagement….open your eyes, these equines are living beings with as much right to live as you losers do.

Their Name Should Be BUREAU of LIFE MURDERS!!!!!